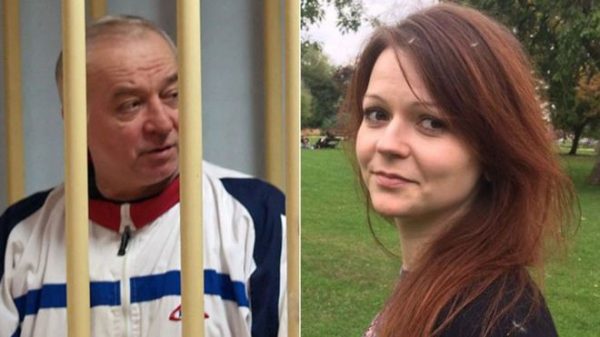 Yulia Skripal, the daughter of ex-spy Sergei Skripal, is improving rapidly and no longer in a critical condition, says the hospital treating her. She and her father were admitted nearly four weeks ago after being exposed to a nerve agent in Salisbury. Mr Skripal remains in a critical but stable condition
Share:

Moscow has told Britain it must cut just over 50 more of its diplomatic and technical staff in Russia as a standoff deepened over the poisoning of a Russian former spy and his daughter in England, the Russian Foreign Ministry said on Saturday.

Moscow also demanded an official explanation for the search of a Russian passenger plane in London, saying it reserved the right to act similarly against British airlines in Russia. Britain said the search was routine.

Russia advised its citizens to think carefully before traveling to Britain, warning they could fall victim to official harassment.

More than 100 Russian diplomats have been expelled by Western countries, including 23 from Britain, to punish the Kremlin over the March 4 attack on Sergei Skripal and his daughter Yulia in the historic English city of Salisbury.

London says Moscow was responsible for the first known use of a military-grade nerve agent on European soil since World War Two, and Britain’s defense minister on Saturday said it was “heartening” to see the backing of international allies.

Russia denies responsibility for the attack. It has cast the allegations as a Western plot to sabotage East-West relations and isolate Moscow.

Russia had already retaliated in kind by ejecting 23 British diplomats. On Friday, the Foreign Ministry summoned British Ambassador Laurie Bristow and told him London had one month to further cut its diplomatic contingent in Russia to the same size as the Russian mission in Britain. It also expelled 59 diplomats from 23 other countries for backing Britain.

A spokeswoman for Britain’s Foreign Office called the Russian move regrettable, and said it was considering the implications of the measures. She did not say how many diplomatic staff in Russia would be affected, while the British Embassy in Moscow says it does not make staff numbers public.

But Russian Foreign Ministry spokeswoman Maria Zakharova said the demand meant Britain would have to cut “a little over 50” more of its diplomatic and technical staff in Russia on top of the 23 diplomats who have already gone home.

“We asked for parity. The Brits have 50 diplomats more than the Russians,” Zakharova said on Saturday.

Asked if that meant London would now have to cut exactly 50 diplomatic and technical staff, she said: “A little over 50.”

The Russian Foreign Ministry later published a list of 14 questions its London embassy had sent Britain’s Foreign Office. It included queries about why Russia had been denied consular access to the Skripals and about France’s role in the case.

In a move underlining the serious nature of the diplomatic crisis, the Russian Embassy also advised Russians to think twice before traveling to Britain, warning of rising anti-Russian sentiment and possible harassment from the authorities, including the risk of objects being planted in their luggage.

“We can’t rule out increased attention by British law enforcement agencies and intelligence services to Russian passport holders,” the embassy said in a statement.

Russia’s Ministry of Transport meanwhile demanded Britain explain an Aeroflot (AFLT.MM) airliner was searched at Heathrow Airport on Friday, in what the Russian Embassy in London called a “blatant provocation”.

Britain disagreed with that assessment.

“It is routine for (Britain’s border agency) to search aircraft to protect the UK from organized crime and from those who attempt to bring harmful substances like drugs or firearms into the country,” Security Minister Ben Wallace said.

The Russian Embassy said Wallace’s logic was “difficult to comprehend” and only amplified its doubts about the incident.

Britain’s Foreign Office also said on Saturday it was considering allowing visits under consular access terms to Yulia Skripal, who is recovering in hospital against all expectations and is no longer in critical condition.

Russia’s embassy said that it had contacted Viktoria Skripal, Yulia’s cousin. “Upon receiving confirmation that Yulia Skripal’s condition is getting better and she is able to communicate, she said she would like to go to London and to visit her cousin,” the embassy said.

The BBC reported on Friday that Yulia was “conscious and talking,” which may help the investigation of how she and her father were poisoned.

The poisoning on British territory has united much of the West in taking action against what it regards as the hostile policies of President Vladimir Putin. This includes the United States under President Donald Trump, whom Putin had hoped would improve ties.