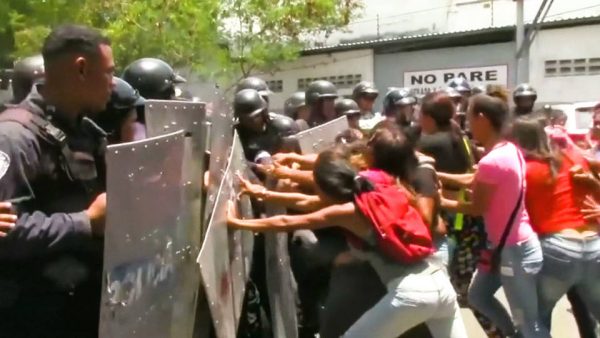 In Venezuela, at least 68 people have died in a fire in a prison in the northern city of Valencia. Prison officials say the fire erupted during an uprising at the prison. Throughout the day Wednesday, family members gathered outside the prison, demanding information about their loved ones.
Share:

Venezuela’s government broke its silence about a riot and fire in a police station’s cells that killed dozens of prisoners on Wednesday, issuing a statement on Friday night sending condolences to relatives and promising an investigation.

“The Bolivarian government of the Venezuelan republic … sends its profound condolences to the relatives and loved ones of each of the people who died in this unfortunate incident,” the statement by the Foreign Ministry read.

The statement did not give any details on the cause of the disaster, which inmates’ relatives and a surviving prisoner told Reuters stemmed from a shootout with police in an overcrowded and lawless jail.

Venezuela’s opposition says leftist president Nicolas Maduro’s response to the 68 deaths in Valencia has been woefully insufficient. Maduro has yet to personally speak about the incident and has instead been tweeting about Easter holidays, a visit by Hollywood actor Danny Glover, and the upcoming presidential election.

In its statement, Venezuela also criticized the United Nations human rights office for “precipitated and disproportionate” comments about the disaster.

From Geneva, the United Nations had called on Venezuelan authorities to carry out a speedy investigation and provide reparations to victims’ families.

Venezuela’s Foreign Ministry said those comments betrayed “bias” and were part of a “multi pronged attack” against the South American nation.

Prison violence has been an issue in Venezuela long before Maduro’s late predecessor Hugo Chavez took office in 1999. Chavez once described the problem as the world’s most “savage” and promised to clean it up.

But opposition politicians said the Valencia disaster was another sign of the ruling socialists’ incompetence in a country that is deep in economic crisis and is plagued with food shortages, hyperinflation, and rampant crime.

“While in Venezuela all sorts of human rights violations are going on, Maduro is busy with … increasing his levels of corruption and showing that he is an incapable leader who has the people going without food and medicine,” said opposition lawmaker Angel Alvarez from Carabobo state, where the jail riot occurred.