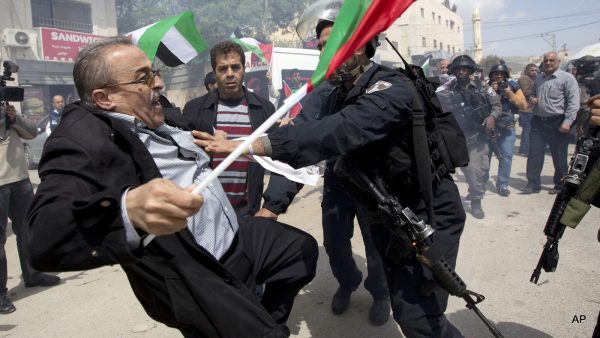 Palestinians protester is pushed by Israeli border policemen during a protest marking the Land Day in the West Bank village of Hawara near Nablus, Monday, March 30, 2015. Land Day commemorates riots on March 30, 1976, when six people were killed during a protest by Israeli Arabs whose property was annexed in northern Israel to expand Jewish communities. (AP Photo/Majdi Mohammed)
Share: 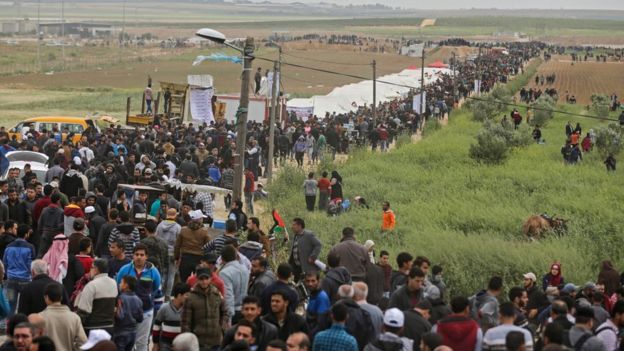 The Palestinian health ministry says at least 15 people have been killed and 750 wounded by Israeli gunfire when Palestinians in Gaza  marched in their thousands to the Israeli border at the start of a six-week protest.

The Israeli military reported “rioting” at six places and said it was “firing towards main instigators”.

Palestinians have pitched five camps near the border for the protest, dubbed the Great March of Return.

They are demanding that refugees be allowed to return to homes that are now in Israel.

Latest at the border?

According to the  Israel Defense Forces (IDF)  there were about 17,000 Palestinians in five locations along the border fence. It said it had “enforced a closed military zone” in the area surrounding Gaza.

The IDF said troops were “firing towards the main instigators” to break up rioting that included petrol bombs and stones being thrown at the fence.

A spokesman said all those who were killed had been trying to breach or damage the border fence, the Jerusalem Post reported.

“Live ammunition was used only against those attempting to harm the fence,” Brig Gen Ronen Manelis said.

Israel has deployed tanks and snipers. Witnesses said a drone had been used in at least one location to drop tear gas.

Hamas, the militant group that has controlled the Gaza Strip since 2007, does not recognise Israel’s right to exist, but last year said it was ready to accept an interim Palestinian state limited to Gaza and the West Bank.

Addressing protesters on Friday, Hamas senior political leader Ismail Haniyeh said “we will not concede a single inch of the land of Palestine”.

He said: “There is no alternative to Palestine and no solution except to return.”

The IDF also accused Hamas of “cynically” using women and children, “sending them to the security fence and endangering their lives”.

The Israeli foreign ministry has said the protest is a “deliberate attempt to provoke a confrontation with Israel” and that “responsibility for any clashes lies solely with Hamas and other participating Palestinian organisations”.

Defence Minister Avigdor Lieberman took the unusual step of tweeting in Arabic, accusing Hamas of playing with citizens’ lives and warning people not to take part.

Friday  March 30th  marks Land Day, which commemorates the killing of six protesters by Israeli security forces during demonstrations over land confiscation in 1976.

The protest is scheduled to end on  May 15th , which Palestinians call Nakba (catastrophe) and which marks the displacement of hundreds of thousands of Palestinians during the conflict surrounding the creation of Israel in 1948.

Palestinians have long demanded their right to return but Israel says they should settle in a future Palestinian state in Gaza and the West Bank.

Erekat, a prominent Palestinian diplomat, member of the PLO and chief negotiator for the Palestinian Authority, claimed in his press release that “The Israeli government has been preparing the ground for attacks against disarmed Palestinian civilians protesting during Palestine Land Day.”

This is an annual protest by Palestinians in Gaza and the West Bank claiming their right to the land of Israel.

Erekat said “Israel’s official incitement against the rights and lives of the Palestinian people has little to do with Israel’s security and a lot to do with perpetuating control over our lives by attacking every non-violent action against Israel’s systematic denial of our inalienable rights.”

He then called for the international community to “fulfill its responsibilities and to hold Israel accountable for violating Palestinian human rights.”

As the UN Human Rights Council met in Geneva HRW said  that “in the last six months, settlement expansion has continued unabated, in violation of Israel’s obligations as an occupying power and to the detriment of Palestinian residents”.

Palestinians, the statement added, “live under a discriminatory, two-tiered system”.

“They stunt Palestinian economic development and trigger crippling restrictions on the right to freedom of movement, access to health and education and a host of other rights.”

HRW also addressed the issue of accountability, observing that “businesses operating in settlements or facilitating settlement activity cannot do so without contributing to serious abuses.”

Updated: At least 16 Palestinians killed  and  not  12 as reported earlier