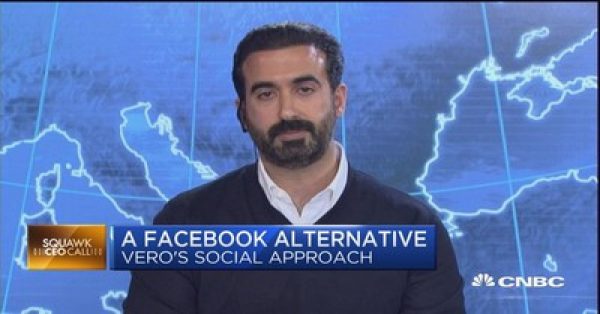 Ayman Hariri, whose late father was prime minister of Lebanon and half-brother is the current one, is taking on Mark Zuckerberg.
Vero, billed as an alternative app to Facebook, allows image sharing free from ads and free from data-driven algorithms.
“Where we come from and the fact that our father left us an inheritance isn’t what we should be judged on,” Hariri says.
BY Matthew J. Belvedere

Billionaire Ayman Hariri — whose Lebanese prime minister father was assassinated in 2005 and whose half-brother Saad is the current prime minister — is taking on Mark Zuckerberg.

The 39-year-old Hariri’s new social sharing platform Vero — billed as an anti-Facebook app — has soared in popularity from just 200,000 users a month ago in Apple‘s App Store to more than 4 million, according to the company. (That, of course, pales in comparison to Facebook’s more than 2 billion active monthly users and the 800 million on Facebook-owned Instagram.)

However, Hariri hopes Vero’s mission to allow image sharing that’s free from ads and free from data-driven algorithms will appeal to users, especially in the wake of Facebook’s Cambridge Analytica data scandal.

The co-founder and CEO said that the currently free service will eventually to look to make money from paid subscriptions. “The subscription is there to keep us honest.”

What Vero is, according to Hariri, is a “simple service” for sharing that won’t use any user data to make money. “We built Vero to be an alternative to all the existing platforms out there that tout to be free but are really taking your data and using that as a currency … for their real customers, which are advertisers.”

Hariri said that social networks that monetize through advertising are caught in a never-ending cycle of chasing growth by improving their algorithms to develop a “better sense of who you are, probably better than you know who you are, in order to target you for ads.”

Vero will be “announcing when the subscription will start soon,” he said. But for now, it’s free-for-life offer to the first 1 million users is being extended “until further notice” because of the flood of new sign-ups in such a short period of time and some technical glitches, he added. “We wanted it to be an inclusive experience for people.”

Addressing his family’s political roots in Lebanon and that country’s role in the Mideast, Hariri said, “I’m proud of my brother for taking over the political role that was left after my father was brutally assassinated.”

Hariri, who earned a computer science degree from Georgetown University, is the son of former Lebanese Prime Minister Rafic Hariri. He inherited and helped run his father’s construction company Saudi Oger. According to the Vero website, Hariri has not been involved in any decisions since he left Saudi Oger in 2013 and sold his financial interests.

CLICK TO WATCH HARIRI’S interview with CNBC
“Where we come from and the fact that our father left us an inheritance isn’t what we should be judged on,” he said. “I’m willing to answer any question from anybody. I’m an open book. I’ve made myself available to anybody who has a question about where I come from and what Vero is.”