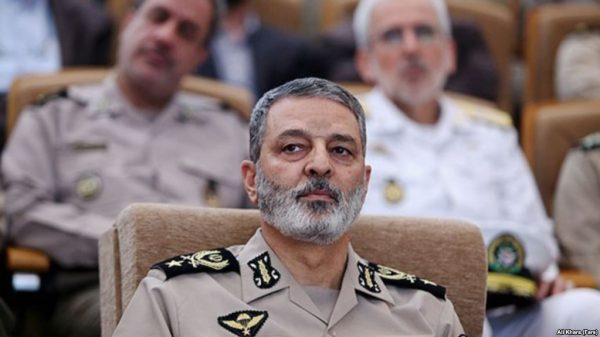 Chief Commander of the Islamic Republic’s regular army has once again threatened Israel with total annihilation.

Referring to a comment by the Islamic Republic’s Supreme Leader, Ayatollah Ali Khamenei, Major General Abdolrahim Mousavi said, “We will finish off Israel’s life within less than 25 years.”

Khamenei had asserted earlier, “I would say that they [Israel] will not see the end of these 25 years.”

Speaking to Tasnim news agency run by the Islamic Revolution Guards Corps (IRGC), Mousavi insisted on Saturday, March 24, “God willing, we will crush the US and see the Israeli regime terminated in less than 25 years.”

Mousavi, who nearly seven months ago was appointed as Chief Commander of the regular army, has a long record of lashing out at Israel.

A month after his appointment on Thursday evening, August 24, 2017, Mousavi echoed his boss’ comments, saying, “The Zionist regime of Israel would not exist in 25 years and Iran will be the side who decides how to end the war if a military offensive breaks out against the country.”

The Islamic Republic’s senior officials have always described Israel as a cancerous tumor and promised to “cut it out”.

However, the war of words with Israel has significantly intensified in recent months in Iran.

Less than a week ago, Fars News, run by IRGC, cited mid-ranking cleric Abdollah Haji Sadeghi as saying, at a ceremony in the city of Ahvaz, “We are now ready for conquering Bait-ul-Muqaddas (Jerusalem) and wiping out the regime occupying Quds.”

Qassem Soleimani, the commander of the Islamic Revolutionary Guards Corps (IRGC) Quds (Qods)Force, has called for the “eradication” of Israel in retaliation for the killing of a Hezbollah commander ten years ago.

Speaking in Tehran at a ceremony commemorating the 39th anniversary of the Islamic Revolution February 14, Soleimani said “The eradication of Israel would be the best revenge for the killing of Imad Mughniyeh.”

Mughniyeh, also known as Abu Rezvan, was a commander with Lebanon’s Shia militant group Hezbollah who was killed in a bomb blast on February 12, 2008 during one of his frequent visits to Damascus, Syria. Hezbollah and Iran have always attributed the assassination to Israel’s intelligence service, the Mossad.

Soleimani also said, “The enemy should know that revenge for Mughniyeh’s blood will not be taken by firing a missile or killing just one person,” adding, “The revenge for his blood is the eradication of Israel. The enemy knows this is going to happen most certainly. This is what God has promised and it will definitely happen.”

Present at the commemoration ceremony were several Hezbollah members, Ahmed Jibril, the leader of the Popular Front for the Liberation of Palestine, Ayatollah Khamenei’s adviser Ali Akbar Velayati, and newly appointed Leader of Friday prayers in Tehran, Mohammad Hussein Abutorabi.

Days later, reacting to Soleimani’s rhetoric, Russian Foreign Minister, Sergei Lavrov told his Iranian counterpart, “Comments such as wiping out Israel from the map are unacceptable and are a wrong way for advancing a country’s interests.”

In the meantime, Israel’s Prime Minister Benjamin Netanyahu has accused the Islamic Republic in recent months of expanding its military presence in Syria., declaring that Tehran’s ultimate aim is war with Israel and its destruction.

In a related  development , a  former Israeli defence minister has said that US President Donald Trump‘s new national security adviser, John Bolton, once tried to convince him to attack Iran.

“I knew John Bolton since he was United States ambassador to the United Nations,” Shaul Mofaz, who served as defence chief from 2002 to 2006, told a conference in Tel Aviv on Sunday.

“He tried to convince me that Israel needs to attack Iran,” Mofaz said, the Ynet news site reported.

Mofaz said Bolton pressured him to carry out the attack when he served as UN ambassador under George W Bush.

Bolton, 69 years old, will be Trump’s third national security adviser. He was highly controversial at the UN. While liked by some diplomats during his term, he irritated many others with his strong-arm approach to diplomacy.

“With the appointments of Mike Pompeo and John Bolton, @realDonaldTrump is successfully lining up his war cabinet,” Markey tweeted shortly after Trump announced Bolton would be his next national security adviser.