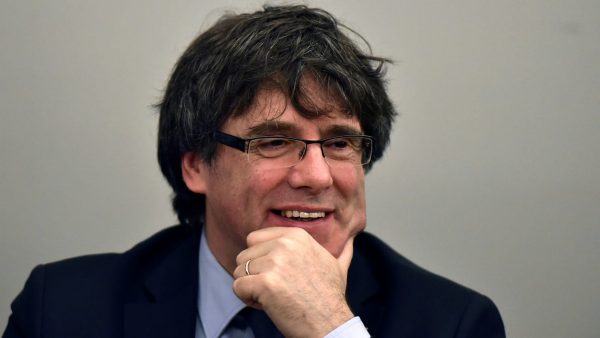 Catalan leader Carles Puigdemont was detained on Sunday in Germany four months after he went into self-imposed exile from Spain, where he faces up to 25 years in prison for organizing an illegal referendum on secession last year.

Puigdemont had entered Germany from Denmark after leaving Finland on Friday when it appeared police would arrest him there and begin an extradition process requested by Spain.

The detention threatens to worsen the Catalan crisis which flared last year when the region made a symbolic declaration of independence, prompting Madrid to take direct rule.

German police said they had arrested Puigdemont in the northern state of Schleswig-Holstein on a European arrest warrant issued by Spain.

In a statement, police said Puigdemont was detained near a section of the A7 highway which cuts through the state from the city of Flensburg near the Danish border.

Police did not say exactly where Puigdemont was being held but the Spanish press said he was at a police station in the nearby town of Schuby.

German magazine Focus said Spanish intelligence informed the BKA federal police that Puigdemont was on his way from Finland to Germany. It gave no source for its report.

It is not clear if Puigdemont will be immediately extradited from Germany. Puigdemont had made clear his preference to fight the extradition process from Belgium.

The former Catalan regional president was at the time of his detention heading to Belgium, according to Puigdemont’s spokesman Joan Maria Pique.

“The president was going to Belgium to put himself, as always, at the disposal of Belgian justice,” Pique told Reuters.

Spain’s Supreme Court ruled on Friday that 25 Catalan leaders would be tried for rebellion, embezzlement or disobeying the state.

On Saturday the speaker of the Catalan parliament in Barcelona called for an alliance against Madrid, describing the spate of legal actions as an “attack on the heart of democracy.”