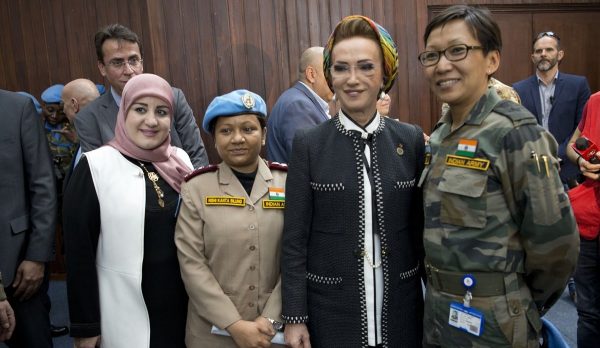 Speaking at an event organized to mark International Women’s Day in the south Lebanese town of Tyre on 8 March, the speakers also highlighted the important role of women in the United Nations peacekeeping.

UNIFIL’s Sector West Commander Brigadier General Rodolfo Sganga said women peacekeepers are essential in reaching out to the women in the communities and bringing in their concerns and contributions towards furthering peace.

“Every peacekeeper can fully recognize that they are important pillars of the Lebanese society, of our operations and of peace and security,” said Brigadier General Sganga. “Women of Lebanon and especially of south Lebanon are role models of strength, persistence and courage.”

He noted that even though the number of women currently serving in armed forces across the world is still much less than the number of men, the UN peacekeeping is a field in which “we lead the way in the pursuit for gender parity.”

Highlighting UNIFIL’s Female Assessment/Analysis and Support Team (FAST) initiative, launched in August 2016, Brigadier General Sganga said it ensures that “women’s voices are heard, that women’s concerns are met, that we – male and female – peacekeepers are there for all genders in the local communities that we are here to serve.”

Speaking on the 8 March event, which was also attended by Lebanese dignitaries including the President of the Tyre Union of Municipalities, Hassan Dbouk, leading Lebanese woman activist and social worker Randa Berri paid tribute to UNIFIL’s women peacekeepers.

“The women in uniform present a good example in the southern environment and work on encouraging the Lebanese women to join the security forces so as to take the responsibility in realizing national and social stability,” said Berri. “For the women operating in UNIFIL – be they in military or civil capacity – are an apparent and bright examples of women’s ability to share with men in taking responsibility in the service of achieving world peace.”

Berri highlighted a number of activities carried out by UNIFIL’s women peacekeepers, including in the fields of healthcare, education, and social, economic and cultural development.