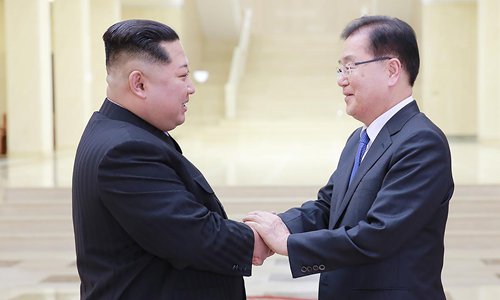 North and South Korea have agreed to hold a summit at their heavily armed border next month, with Pyongyang saying it would consider abandoning nuclear weapons in exchange for security guarantees, Seoul said Tuesday.

If confirmed by Pyongyang, the offer would mark the first time under the current leadership the North had declared itself willing to discuss conditions under which it might consider giving up its nuclear arsenal — a move it has previously insisted was firmly off the negotiating table.

Following a meeting in Pyongyang with leader Kim Jong Un, Chung Eui-yong, the national security adviser to South Korean President Moon Jae-in, said the North had stated there was “no reason” to hold on to its nuclear weapons “if military threats towards the North are cleared and the security of its regime is guaranteed”.

Chung said Kim and Moon would meet in late April at the fortified border village of Panmunjom for what would be only the third inter-Korean summit since the end of the 1950-53 Korean conflict.

He said the two sides would establish a leader-to-leader hotline, offering the highest-level contact between two nations that are technically still at war.

After months of soaring tensions that have seen Kim Jong Un trade insults and threats with US President Donald Trump, temperatures cooled dramatically as South Korea hosted the Winter Olympics.

Despite having few athletes competing at the Games, Pyongyang sent a large and colourful delegation, which included Kim’s sister, who met with Moon to offer a summit meeting.

That visit was returned this week when Moon sent the highest-level delegation in a decade north of the border.

The envoys returned Tuesday with news of apparent breakthroughs in the long-logjammed relationship.

“The South and the North agreed to hold the third summit at… Panmunjom in late April,” said Chung, referring to the truce village at the heavily-fortified border.

If realised, the summit will be the third meeting between the leaders of the two Koreas, which technically remain at war after the 1950-53 Korean War ended with an armistice instead of a peace treaty.

The previous two summits were held in 2000 and 2007, respectively, under South Korean presidents Kim Dae-jung and Roh Moo-hyun who both advocated dialogue with Pyongyang.

They both met with Kim’s father, Kim Jong Il.

The two Koreas also agreed to open communication hotline between Moon and Kim to “defuse military tension and to have close coordination,” Chung said Tuesday.

The leaders will have their first phone conversation before the planned summit, he added.

North Korea also pledged that it would freeze its nuclear and missile testing programme during the period of dialogue.