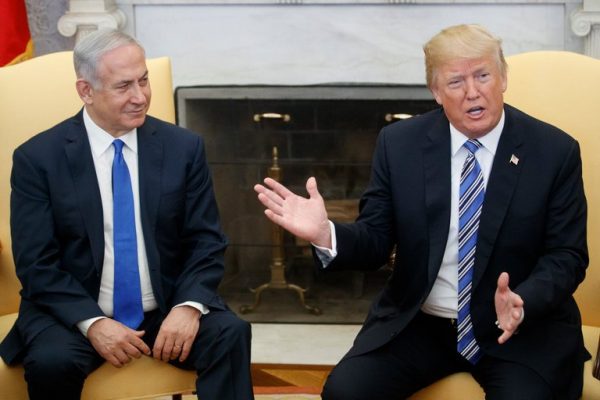 WASHINGTON — In the midst of his campaign, President Trump vowed to bring peace to the Middle East by playing it down the middle between Israeland the Palestinians. “Let me be sort of a neutral guy,” he said. Two years later, any hopes of being the neutral guy are long gone.

In a meeting at the White House on Monday, Mr. Trump and Prime Minister Benjamin Netanyahu of Israel put on display perhaps the closest relationship between leaders of their two countries in the seven decades since Israel declared independence. As for the Palestinians, they are no longer on speaking terms with the president, who is busy cutting their aid.

Few if any doubted that Mr. Trump came into office more supportive of Israel than the Palestinians and he trumpeted his pro-Israeli credentials, but any semblance of straddling the line between warring camps has vanished and the notion that he could bring them together appears more distant than ever. Mr. Trump and Mr. Netanyahu lavished praise on each other on Monday, and the president said he might visit Jerusalem in May to preside over the politically potent transfer of the American Embassy to the disputed holy city.

Mr. Trump insisted that he still had “a good chance” of forging peace and expressed optimism that the Palestinians were ready to return to discussions. “The Palestinians, I think, are wanting to come back to the table very badly,” he said, despite evidence to the contrary. Then he acknowledged what would happen if he is wrong. “If they don’t, you don’t have peace.”

The White House has said it is close to finishing a peace plan that it could release soon. But the conditions hardly seem ripe. The two men who met in the Oval Office on Monday are both fighting off investigations. The president’s son-in-law, Jared Kushner, who was leading the effort for him, just lost his top-secret security clearance. And the Palestinians are angry about the embassy.

“I can’t see him actually proposing anything,” Oded Revivi, chief foreign affairs envoy for the Yesha Council, which represents West Bank settlers, said of Mr. Trump. The president seems unlikely to come up with a plan more acceptable than those that have been rejected in the past, Mr. Revivi said, and “he doesn’t want to fail where others have failed.”

The meeting between Mr. Trump and Mr. Netanyahu, their fifth since the president’s inauguration 13 months ago, demonstrated just how close the two have become while the Palestinians remain off at a distance. The two celebrated Mr. Trump’s decision in December to recognize Jerusalem as Israel’s capital and move the American Embassy there from Tel Aviv in defiance of much of the rest of the world.

Mr. Netanyahu extolled Mr. Trump for the decision, comparing him to three of the most important figures in the history of the Jewish people: King Cyrus of Persia, who 2,500 years ago freed the Jews from exile in Babylon and permitted them to return to Jerusalem; Lord Arthur James Balfour, the British foreign secretary whose declaration in 1917 first paved the way for a Jewish homeland in Palestine; and President Harry S. Truman, who recognized Israel’s existence 11 minutes after it declared independence in 1948.

“Mr. President,” he continued, “this will be remembered by our people through the ages. As you just said, others talked about it. You did it.”

Unlike Mr. Trump, however, Mr. Netanyahu mentioned the goal of peace with the Palestinians only in passing and focused instead on the topic he always makes his top priority when he visits Washington, namely Iran.

He hoped to use the visit to encourage Mr. Trump to tear up President Barack Obama’s agreement with Tehran limiting its nuclear program or renegotiate it to toughen its provisions, particularly with respect to ballistic missiles. He also sought consensus on how to counter Iran’s presence in Syria.

“Iran must be stopped,” Mr. Netanyahu said. “That is our common challenge.”

He voiced deep skepticism about the prospect of a Palestinian state, recalling how Gaza fell under the control of Hamas after Israel withdrew. “You can bring models, theoretical models, say it will be good if we give them a state,” he told the reporters. “Empirically, it doesn’t work with what we see. When we leave land, terror organizations take it up. Immediately.”

Mr. Trump, by contrast, was still more interested in seeking what he has called “the ultimate deal” between Israel and the Palestinians. “We’re working on it very hard,” he said with Mr. Netanyahu at his side in the Oval Office. “Look, it would be a great achievement even from a humanitarian standpoint. What better if we could make peace between Israel and the Palestinians? And I can tell you, we’re working very hard on doing that and I think we have a good chance.”

Palestinian leaders, who also claim Jerusalem as the capital of a future state, have given no public indication that they would return to discussions any time soon. In response to the president’s Jerusalem move, they declared that they no longer saw the United States as a neutral broker with the Israelis. Mr. Trump then withheld $65 million in aid for Palestinian refugees.

But Mr. Kushner went to the United Nations recently to hear Mahmoud Abbas, the Palestinian leader, speak in an effort to show respect shortly after the president publicly pressed Israel on settlement construction in the West Bank.

The Monday meeting came at a time when both Mr. Trump and Mr. Netanyahu are under increasing domestic pressure from investigations bearing down on them and their families. Shortly before their get-together, Mr. Trump was lashing out at the investigation into whether his team cooperated with Russia during the 2016 election, while reports from Israel indicated that a former confidant of Mr. Netanyahu’s had made a deal with the police in a corruption investigation of the prime minister.

“They have an awful lot in common and they both may be desperately in need of a friend and someone who understands what they’re going through,” said Mara Rudman, a former deputy special envoy for Middle East peace under Mr. Obama. “And they happen to be showing it for the world to see.”

Mr. Netanyahu later said their mutual woes — they both use the phrase “witch hunt” to describe the inquiries into their activities — never came up during their meeting. Instead, they relished the chance to showcase their partnership during the part of their session when cameras were on.

“The relationship has never been better,” Mr. Trump declared.

Mr. Trump has made his decision to move the embassy a selling point among his supporters, lauding it during a recent speech to the Conservative Political Action Conference as one of his major achievements. His administration announced that it would formally open the Jerusalem embassy in May to coincide with the 70th anniversary of Israel’s independence by redesignating an existing consular facility.

The president said on Monday that he may attend. “We’re looking at coming,” Mr. Trump said. “If I can, I will.”

As he has before, Mr. Trump argued that his decision to recognize Jerusalem resolved a tough issue dividing Israel and the Palestinians. “We’ve taken it off the table,” he said. “So this gives us a real opportunity for peace.”

Hardly any veterans of Middle East peacemaking, including some who support moving the embassy, share this view. Mr. Trump’s unilateral declaration does not mean that the Palestinians have given up on Jerusalem; instead, they have dug in. Many former negotiators have envisioned a peace deal in which both sides operate their capitals out of Jerusalem, the Israelis in the west and the Palestinians in the east.

As he often does, Mr. Trump boasted that he had already cut the cost of building a new embassy, but he seemed to be conflating two different expenses. “They put an order in front of my desk last week for a billion dollars,” he said. “I said a billion? What’s that for? They said, ‘We’re going to build an embassy.’ I said we’re not going to spend a billion dollars. We’re actually doing it for about $250,000.”

The State Department has estimated that construction of a new embassy will cost about $500 million. Mr. Trump’s reference to $250,000 presumably is the cost of making minor adjustments to the existing consular facility so that it can house an office for the American ambassador and be formally redesignated an embassy while a new facility is constructed.