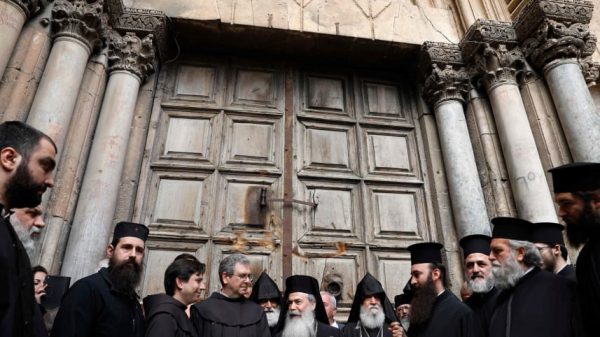 Christian leaders stand outside the closed doors of the Church of the Holy Sepulchre in Jerusalem’s Old City, February 25, 2018.GALI TIBBON/AFP
Share:

The leaders of the major Christian sects in Jerusalem closed the Church of the Holy Sepulchre, built on the traditional site of Jesus’ crucifixion and resurrection, for several hours on Sunday to protest an Israeli plan to tax their properties.

The Christian leaders responsible for the site issued a joint statement bemoaning what they called a “systematic campaign of abuse” against them, comparing it to anti-Jewish laws issued in Nazi Germany.

The Christians are angry about the Jerusalem municipality plans to tax their various assets around the city and a potential parliament bill to expropriate land sold by the Greek Orthodox and Roman Catholic churches. The churches, which are major landowners in the holy city, say it violates a long standing status quo.

The Greek Orthodox, Roman Catholic and the Armenian Apostolic leaders said the moves seemed like an attempt to “weaken the Christian presence in Jerusalem.”

The Church of the Holy Sepulchre is a major place of worship in Jerusalem’s Old City. Christians revere it as the site where Jesus was crucified and where his tomb is located, and its closing is highly unusual.

The Jerusalem municipality said it would continue to care for the needs of Jerusalem’s Christians and maintain their full freedom of worship. It said the church, just like other sacred sites in the city, is exempt from municipal property taxes and that will not change.

“However, hotels, halls and businesses cannot be exempt from municipal taxes simply because they are owned by the churches. These are not houses of worship,” it said in a statement. “We will no longer require Jerusalem’s residents to bear the burden of these huge sums.”

Jerusalem is one of the country’s poorest cities, and the tax revenue from the properties is estimated to be tens of millions of dollars.

Separately, parliament is pursuing a bill that will appropriate lands in Israel sold by churches to anonymous buyers since 2010. The bill’s sponsor, lawmaker Rachel Azaria, said these questionable sales have plunged thousands of Jerusalem residents into uncertainty over their living conditions.

She said the bill was aimed to protect apartment owners against property speculators and had “nothing whatsoever” to do with the churches. “We have no intention … to make them feel unwelcome,” she said.