Dow sinks into correction territory, sheds over 10000 points, its second-worst drop in history 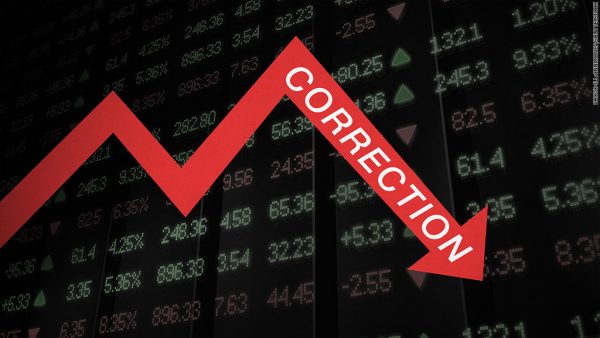 The Dow Jones industrial average plunged 1,033 points Thursday, its second-worst drop in history, extending its losses in the recent sell-off to more than 10% and putting it officially into correction territory.

The blue-chip stock average’s recent drubbing, which follows its record 1,175-point drop Monday, has been fueled by fears that an era of low interest rates and tame inflation that have driven up stock prices may be nearing an end.

“The Dow has been hit by a tsunami of volatility,” says Paul Schatz, president of Woodbridge, Conn.-based investment management firm Heritage Capital. “The market is repricing in a lot of factors at once. And rates have run up fast. The market always has a tough time when things happen in a (straight-up) fashion.”

The correction has resulted in a paper loss of $2.49 trillion for the S&P 500 and $5.2 trillion loss for global markets, according to S&P Dow Jones Indices.

Despite Thursday’s downturn, stocks remain in a bull market that began in March 2009. It would take a 20% drop for that long-term rally to end and to usher in the first “bear” market in nearly a decade.

While the broad market is only half way to a bear market, 96 stocks in the S&P 500 are down more than 20% from their 52-week highs, which puts them firmly in bear market territory, according to FactSet data.

The losses are piling up, but one Wall Street pro says the financial pain must be put in proper perspective.

“We’ve just given back some recent gains, not wiped out anyone’s life savings,” says Bankrate.com’s chief financial analyst Greg McBride. “If you put $100 into the market at the Jan. 26 peak, you’d still have $90.”

The 10% stock decline since late January has occurred even though Wall Street and President Trump stress that the health of the economy, labor market and U.S. businesses remain strong.

The stock market has also been upended by an unwinding of a popular trade that relied on the market remaining calm. But that trade has turned bad amid price swings that have turned suddenly violent since the market’s peak last month.

Sparking the initial turbulence was a report released last week showing that hourly wage growth rose at its fastest pace since 2009. That strong pay data sparked fears of coming wage inflation, which intensified worries that the Federal Reserve might need to hike rates more often this year than the three times it had originally signaled.

On Thursday, the yield on the 10-year Treasury note again ticked up to a recent four-year high of 2.88%, sparking fears that rates could quickly top the key 3% level. At that level, bonds become a more attractive investment and draw money away from stocks.

“The market has undergone a psychological change,” says Doug Ramsey, chief investment officer at The Leuthold Group in Minneapolis. “The mystery now is what level on the 10-year Treasury will, if not break the bull market’s back, at least knock it back a few steps.”

While Wall Street has been calling for a correction for some time, given the market’s euphoric rise, the fall has been more violent and quicker than anticipated.

“It’s the end of complacent markets,” says Stephen Janachowski, president and CEO of wealth management firm Brouwer & Janachowski in Mill Valley, CA. “While the economic landscape hasn’t changed, yet, investors believe it’s changing. This was the catalyst for profit taking. It fed on itself. Investors have now had a taste of fear of loss, which hasn’t happened in a long time. There has been a whole shift in investor psyche.  People will be jumpy going forward.”

Tom Martin, senior portfolio manager with Globalt Investments, said he didn’t see anything specific moving the market lower Thursday, just a continuation of a shift in investor mindset from fear of missing out in a rising market to worry of clocking big losses in a market that’s turned south.

“This is going to take longer to work out than people expect,” he said. “In January we talked about the fear of missing out. What we have now is what I call fear of getting caught.”