By Elliott Abrams
In May, 2017 Major General Qassem Soleimani, chief of the Iran’s Revolutionary Guard Corps’ foreign operations branch known as the Qods Force, visited the Iraq/Syria border in the company of an Iran-backed Shia militia.

A spokesman for the militia, called the Popular Mobilization Forces, was quoted in Newsweek : “This will be the first step to the liberation of the entire border,” Ahmad al-Asadi, a spokesperson for the PMF said, according to the Associated Press. “This victory will also be an important incentive for the Syrian Arab Army to secure the entire border from the Syrian side,” he added.

Iranian-backed forces, that is, would take both sides of the border, so for Iran there would be no border. In June Soleimani was reported to be on the Syrian side of the border.

Now, it is reported that one of Iran’s hardest-line leaders, Ibrahim Raisi, has visited the Israeli-Lebanese border. Raisi, the defeated candidate for president in 2017, is a member of the Assembly of Experts that will choose a successor to “Supreme Leader” Ali Khamenei and is a candidate for that position himself.

Visiting Beirut, he took time to talk with the head of Hezbollah and to pay his respects at the home of the late terrorist mastermind Imad Mughniyeh. But, as the Jerusalem Center for Public Affairs noted,

The high point of Raisi’s visit occurred in southern Lebanon when he toured the border with Israel escorted by Hezbollah military commanders and Iranian officers…. 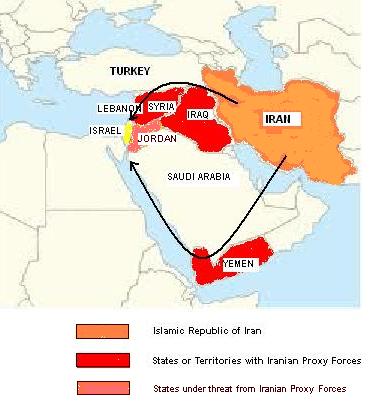 First, borders have no meaning for Iran; the Islamic Republic is determined to be the dominant player in Iraq, Syria, and Lebanon.

Second, the governments of those countries have no control of their own borders and territory; Iranian military and terrorist leaders can come and go as they please.

Third, whether Lebanon gets into a conflict with Israel will be determined by decisions made in Tehran, not in Beirut.

That is a sad development for most Lebanese, who are not fanatical Hezbollah supporters. But it is one the United States should keep in mind as we assess our relations with Lebanon and our military aid to that country.

Elliott Abrams is senior fellow for Middle Eastern Studies at the Council on Foreign Relations.

This article first appeared on the Council on Foreign Relations site.