‘We need to rebuild the families,’ say relatives of Syrian regime detainees 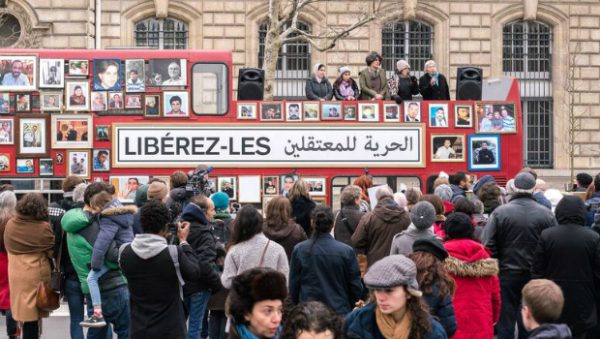 As talks to release the thousands of detainees in Syria fail again and again, FRANCE 24 met with Families for Freedom, a group of Syrian women who aim to raise awareness of their plight.

He’d told her the screaming and the torture goes on all night. Their tiny cell, strategically placed next to the torture chamber so they can hear what’s going on inside, is crammed with 150 naked people. In the morning — after breakfast of a small piece of bread and five olives — the detainees’ first job is to remove the bodies of those killed during the night. There are usually about 35 victims. Sometimes there are as many as 50. They put the bodies into sacks and load them onto trucks. Then they wash the torture chamber’s floor of the victims’ blood. This is the morning ritual at the military intelligence detention centre, branch 227, in the Syrian capital of Damascus.

As she describes the detention centre where she believes her husband, Nasser, a civil activist, is being held, Farizah Jahjah, 50, takes a huge breath and her eyes fill with tears. She’s been perfectly composed until now. Neatly dressed in a black knee-length dress and red scarf with glasses perched on her dark hair, she talks passionately yet calmly about the issue of detainees in Syria.

It’s been nearly four years since she’s had news from her husband. She has no idea if he’s dead or alive. She’s heard rumours but nothing concrete, nothing from an official source. She’s only heard an account of his time in prison from a man who was with him when he was first detained and subsequently released.

Farizah’s husband is one of thousands of Syrians being held in secret detention centres and prisons throughout the country. A year ago, she and four other Syrian women founded Families for Freedom, an NGO that aims to give a voice to the families of detainees and highlight their plight.
Ultimately, they’re asking for the immediate release of all those unlawfully detained. But in the meantime, they’re urging the Syrian government to release a list of names of all those in custody — along with their location and status — and allow international aid groups access to detention facilities.

It’s impossible to give a precise figure of the number of detainees in Syria because no international observers have been given access to detention centres. Estimates of those behind bars vary wildly — from 200,000 to as many as 300,000. As of January 2018, the Syrian Network for Human Rights says at least 215,000 people are believed to be in the custody of authorities, including women and children.

Some have been detained for peaceful opposition, simply being in the wrong place at the wrong time or for the “crime” of delivering milk.

Hala al Ghawi, 39, a doctor and another of the group’s founders, says that every family in her neighbourhood is missing someone. Farizah rattles off lists of friends who are missing family members — cousins, grandparents, siblings and children. Sometimes, whole families have been disappeared or detained.

Forced disappearance and arbitrary detention have long been a weapon of Syrian President Bashar al-Assad’s government but there has been a sharp escalation since the beginning of the civil war in 2011. Although detention and torture are practised by all sides in the conflict, Assad’s government is believed to be behind the vast majority of arrests.

Some of the detainees are civil activists, like Farizah’s husband; others are doctors, like Hala’s husband, who was arrested in 2011.

“He wasn’t involved in any political activity,” she says. “He is a doctor. He made it his duty to help people.”

Dr. al Ghawi was arrested after a man rang his clinic to make an appointment for his wife, saying she was suffering from stomach problems. When the man arrived and found Dr. al Ghawi in his practice, he said he’d return with his wife – but instead, security forces swooped in and took the doctor away. He was lucky enough to be released after 70 days.

He was freed, Hala believes, so that he would warn people outside of the horrible conditions inside prison. Seven years later, he suffers from depression, PTSD and still has flashbacks from his time inside. “He dreams that they are coming to capture him,” she says.

Then in 2013 her father-in-law, 70, was arrested at the market when he was buying vegetables. And 20 days later they took her brother, now 33, from his metal workshop in the west-central city of Hama.

Despite begging for information and going to every prison she could, she has no news of either of them.

“It’s chaos in some places,” said Mohammed Ghannam, 38, who spent 14 months in prison in Homs and now lives in Paris. “There are people who are thrown in prison and they completely forget about them. There are no papers for their arrest.”

The prisons are overflowing and some people are being held in underground shopping malls that have been turned into secret detention centres. Ghannam was briefly detained and interrogated in a cultural centre in the northwestern city of Idlib.

Assad has refused to bow to demands for international observers to visit the prisons. On the rare occasion that he does, as he did in Homs in 2011, the Assad regime manages to find a way to hoodwink the international community.

“They always find a way to trick the system”, said Ghannam. “I was there. They moved us from the [detention] centre. Those observers saw an empty bombed out building.”

‘The walls have ears’

Before the 2011 popular uprising, many Syrians were too afraid to speak out for fear of retribution. “My parents told me the walls have ears,” said Hala, who grew up in the city of Hama, scene of the 1982 massacre, where an estimated 20,000 people were killed on the orders of Hafez al-Assad — the current president’s father.

But the revolution — and the disappearance of their loved ones — gave them courage. Although both Hala and Farizah now live outside of Syria, they still have family at home. Hala, who lives in Turkey, says she is very careful and cautious about what she says. She wants to stress that Families for Freedom is asking for the release of detainees as a humanitarian gesture. They don’t want Assad to use the detainees as a negotiating tool.

Before her husband’s arrest in 2014, Farizah herself had been threatened with detention. She fled Syria with their two children, eventually making a new home in France. But her husband had refused to leave on the principle “that if all of us are seeking freedom and a better future — some of us have to stay”. Farizah was initially too afraid to speak out about her husband’s arrest. After years of silence she felt it was her only option. She won’t even talk about her family in Syria for fear of reprisals against them.

Hala shrugs when she explains why her parents refuse to leave the country. They’re waiting for her brother, she says, “that maybe one day he will knock the door and come”.

Part of the success of Families for Freedom, they say, lies not just in the comfort that it’s brought to detainees’ families — who now share photos of their relatives and talk more openly about the issue — but that it’s also helped raised awareness of the horrific conditions in Syria’s prisons and detention centres.

“You beg them to kill you after they hang you for hours,” says Ghannam who was imprisoned on terrorism charges after delivering food and medical supplies to the besieged city of Homs in 2011.

After a three-month interrogation where he was raped with a plastic stick, doused in diesel and threatened with a lighter, left in a room with four dead bodies for three days and three nights and slung upside down like a dead cat, he “sang like a canary”.

“They broke me,” he said, after a brutal night of interrogation in the notorious “heaven room” of the Palestine branch of Damascus’s detention centre.

“I really felt I wanted to work with the government, that I was completely wrong, and that the revolution was a conspiracy.”

Ghannam was transferred to Homs central prison and was lucky enough to be released on parole after his friends “hired at least eight lawyers and paid a lot of money”. He fled to Lebanon three days later and was sentenced to eight years in absentia.

“I’m not scared from bombing like I’m scared to be detained,” says Hala. “It’s very horrible.”

Negotiations to release the detainees have so far failed. Their plight has been repeatedly sidelined at UN talks in Geneva, Sochi and Astana.

Part of the problem lies in the Assad government’s “reluctance” to address the problem, said Sara Kayyali, Syria researcher at Human Rights Watch.

The release of detainees is “crucial for any forward-looking solution” to the Syrian conflict, Kayyali added, “especially as talks of the conflict winding down and people returning are advanced”.

Hala believes in the West’s power to pressure Assad if there is the political will to do so.

Both women are disappointed by French President Emmanuel Macron’s position on Assad. Macron’s predecessor, François Hollande, had called for Assad’s exit, describing him as a “butcher” of his own people and insisting that “he cannot be part of the solution”.

But Macron says Assad’s departure is no longer a prerequisite, adding that Paris’s priority is fighting terrorism and ensuring Syria does not become a failed state. He has also questioned the Syrian opposition’s credibility.

“If the Assad regime were gone, ISIS would go,” says Hala. “They depend on each other to survive,” referring to Assad’s 2011 release of militant Islamists from Saydnaya prison, some of whom went on to play leading roles within the Islamic State group, Al Nusra Front and other extremist groups.

Ghannam is not optimistic about the detainees’ fate. “There’s no oil behind them, there is no f***** piece of land. What benefits can France get? Maybe reconstruction deals?”

“They’re talking about rebuilding the country — the buildings — but they need to rebuild the families,” says Hala. “If I know that a person is related to the regime and he tortured my brother til death I cannot forgive him.”