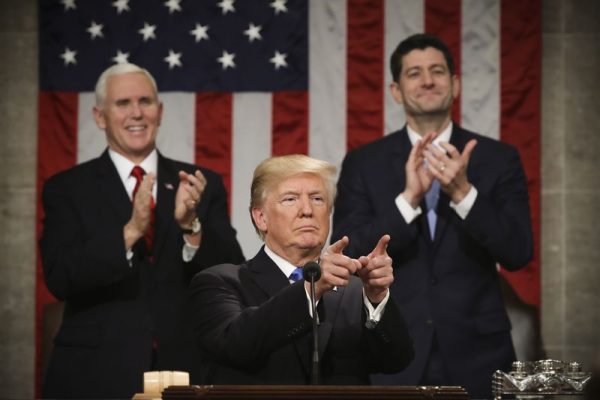 Donald Trump pretended to be the president Republicans wish he really was. The other Trump didn’t show up tonight, but he won’t go away

Washington , DC- For one night as he delivered his State of the Union address, Donald Trump pretended to be the president Republicans wish he really was.

There was no complaining about “fake news.” There were no immature rants or crude insults. There were no blatantly racist comments. There was no undermining American institutions — and not even a mention of the investigation into Russian interference that he so loathes.

He said he fulfilled his promise to pass “massive tax cuts” into law. He said he “repealed the core of disastrous Obamacare, the individual mandate.” He said he’s appointed a new Supreme Court justice, “and more circuit court judges than any new administration in the history of our country.” He bragged about rolling back regulations and defending the Second Amendment.

All of that is true. He really has done those things — things that any generic Republican elected president would have likely done, or at least tried. And as we saw with the repeated enthusiastic applause of congressional Republicans, the party has been thrilled.

Yes, on other issues — DACA, infrastructure, trade, prescription drug prices, family leave — Trump portrayed himself as more of a pragmatist, willing to depart from the party line or compromise with Democrats. But Republicans know by now that they control the votes in Congress, and that Trump’s been unwilling to try and make them pass anything they don’t want.

Indeed, Trump’s acquiescence to the generic Republican agenda — and his genuine success in accomplishing much of it — is really all we need to explain why the GOP has stuck by the president despite all the other, less palatable things he’s done.

The problem is that, well, he’s also done all those other things.

The other Trump didn’t show up tonight, but he won’t go away

The president elected Republicans prefer to avert their eyes from some of the less savory parts of his presidency:

These other uglier, aspects of Trump’s presidency were hidden for the night. But they’ve been temporarily hidden before — often in other major speeches — and they never really go away. As Ezra Klein wrote last year, “There is no Trump pivot, and there never will be.”

Republicans, of course, are aware of all of this. But they prefer to believe that the list of things mentioned above don’t really matter. What really matters, they argue, are those conservative policies Trump has pursued and successfully won. That’s the real Trump presidency.

And in part, it is — but only in part. What Trump’s speech tonight did was let Republicans pretend that’s all it is, for a night — and that the other, equally real Trump is no more than a liberal fantasy, or a bad dream.