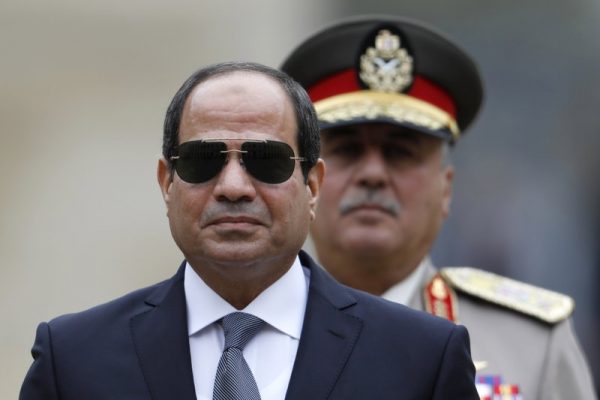 Egyptian President Abdel-Fattah el-Sissi attends a military ceremony in the courtyard at the Hotel des Invalides in Paris, France. On Wednesday, Jan. 31, 2018, a clearly furious el-Sissi gave a thinly veiled but stern warning to opposition politicians calling for a boycott of presidential elections in March, saying he would die first before allowing anyone to mess with the country’s security. El-Sissi spoke a day after a coalition of opposition parties and public figures described the vote as a farce. (Charles Platiau, Pool via AP, File)
Share:

Egypt’s president on Wednesday angrily threatened to take strong action against anyone trying to disrupt the country’s stability in a warning that followed calls by opposition politicians for a boycott of upcoming presidential elections.

The sharp warning by a visibly furious President Abdel-Fattah el-Sissi was a signal that authorities will tolerate no questioning of the legitimacy of the March 26-28 vote. The general-turned-president said he would not allow a repeat of the 2011 uprising.

Those calling for a boycott have called the election a farce after a string of would-be candidates were arrested, forced out of the race or dropped out in protest. It had appeared el-Sissi might be the only one to run until at the last minute on Monday a little-known politician stepped forward to enter the race as a face-saver.

That prevented the embarrassment of a one-candidate election, but also sparked considerable mockery on social media. Criticism of the vote could taint what is seen as el-Sissi’s inevitable victory and open the door to wider dissent, which his government has largely shut down over the past four years.

The boycott call came Tuesday from a coalition of opposition parties and public figures. Earlier this week, five opposition figures, including a 2012 presidential candidate and two top campaign aides for a now-arrested presidential hopeful, also called for a boycott and urged Egyptians not to recognize the vote’s outcome.

One would-be candidate forced out of the race, former lawmaker Mohammed Anwar Sadat, called on the opposition to stage a peaceful march on the presidential palace to present el-Sissi with “demands” pertaining to the country’s political future. Sadat is a nephew of assassinated Egyptian leader Anwar Sadat.

El-Sissi did not directly mention the boycott calls during his speech at a ceremony marking the launch of a giant offshore gas field. But the timing a day after the calls suggested he was referring to them — and his vehemence appeared to suggest that any questioning of the election was considered equivalent to destabilizing the country.

Grim-faced and at times shouting, el-Sissi implied he would launch an intensified crackdown. “There will be other measures against anyone who believes he can mess with (Egypt’s) security … I fear no one but God,” he said.

“Whoever wants to mess with Egypt’s security and wreck it must get rid of me first because by God Almighty I will not allow it. I would die so that 100 million can live,” he added.

He said that if attempts to destabilize the nation continue, he would call on Egyptians to give him “another mandate” to counter what he called the “evil people.”

That was a reference to the “popular mandate” that el-Sissi asked for to fight terrorism in July 2013, just after he led the military’s ouster of Islamist Mohammed Morsi, Egypt’s first freely elected president whose one year in office proved divisive. Millions took to the streets in response to his call, and el-Sissi then launched Egypt’s largest and harshest crackdown on dissent in decades, arresting thousands, mostly Islamists but also secular pro-democracy activists.

In his warnings Wednesday, el-Sissi also made a rare reference to the 2011 uprising that forced autocrat Hosni Mubarak to step down.

“Be warned, what happened seven or eight years ago will not be repeated. … You seem not to know me well enough. No, by God, the price of Egypt’s stability and security is my life and the life of the army,” he said, directing an intense gaze at Defense Minister Sidki Sobhi, seated to his left. “I am not a politician who just talks,” he added.

His reference to the uprising had echoes of the line that is presented almost daily in pro-government media demonizing the 2011 “revolution” as a foreign plot to destabilize Egypt carried out by paid agents. Many of the uprising’s key figures are either in jail, live in exile or quietly moved to the sidelines.

El-Sissi has consistently cited security and economic recovery as taking precedence over freedoms. He often complains of the political turmoil after 2011 that wrecked the economy.

In office, el-Sissi has pursued mega infrastructure projects and painful austerity measures to repair the economy, stopping a slide in bankruptcy but also sending prices soaring beyond the reach of a majority of Egyptians.

“Stability and security means where we are now, anything else is doom. Please, don’t let anyone lead (the nation) to doom,” he warned.