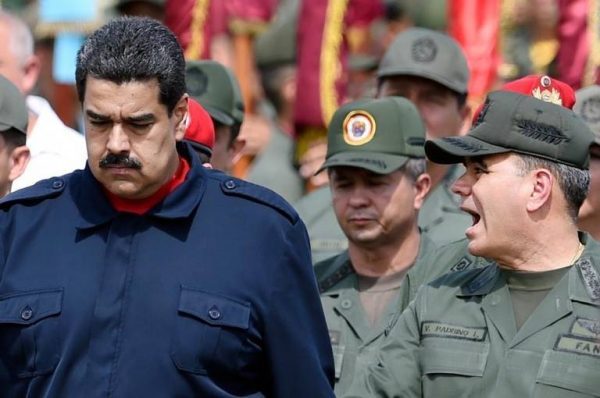 The government of Venezuelan President Nicolás Maduro, hated by much of the country’s population and sanctioned by a growing number of countries, is facing problems keeping the police and military happy as food shortages and hyperinflation start to hit their barracks.

Recent meetings and internal documents of the Venezuelan armed forces point to concern in the Maduro regime as troops grow more demoralized and commanders report an increase in the number of insubordination cases and desertions.

In addition to the signs of unrest among the Army and National Guard units, the government also faces a tense relationship with the investigative police agency known by its initials in Spanish, CICPC, after the recent public execution of rebel policeman Oscar Perez, who was killed by security forces in an assault broadcast live through social media.

“There is unrest, and there’s a lack of discipline. The soldiers are demoralized,” said Gen. Herbert Garcia Plaza, a former Maduro cabinet minister, in a phone call from Washington. “Military installations have declared a state of alert, which is not normal [at this time] because there are not even street protests now. It seems like they think the enemy is inside.”

The high military command, in a document leaked recently to the news media, ordered that 75 percent of the soldiers be restricted to their barracks, in effect activating a general state of alert.

Another document, which contained the minutes of a meeting of senior armed forces leaders, showed Army Commander Gen. Jesus Rafael Suarez Chourio instructing unit commanders to improve their relations with subordinates, listen to their opinions and “motivate them to remain loyal” to the army.

The low morale within the armed forces is spreading through the barracks at a time when inflation is hitting 4,000 percent and the legal minimum salary pays for only 10 percent of the monthly basic food basket.

The stolen police helicopter used in the attacks on Venezuela’s Supreme Court was found Wednesday in a rural part of the country.

Soldiers generally eat in their barracks, but food shortages are forcing some to eat fewer than three meals per day, even though the armed forces are in charge of food distribution throughout the country.

Food services inside military installations “are only receiving 60 percent [of their normal supplies]. There was a cut of 40 percent because they just have no way to provide that 100 percent,” said Garcia Plaza.

Videos posted recently on social networks, as well as news reports, have pointed to the difficulties facing the soldiers. One video posted early this month showed a pair of soldiers rummaging through garbage bags in search of something to eat. Another showed an angry group of National Guard members demanding to speak with the minister of defense because they were hungry.

The difficult situation is also reflected in the high number of desertions.

Garcia Plaza said nearly 800 Guardsmen and 1,200 soldiers did not return on time to their barracks after the Christmas holidays, and many of them are now considered to have deserted.

Journalist Javier Ignacio Mayorca has reported that the government is trying to increase benefits for the armed forces and National Guard in an attempt to counter the plummeting morale.

“That is suspended because the situation is very difficult,” Mayorca added. “All the officers and all the personnel with technical knowledge are just waiting to meet their minimum time of service so they can leave and join the private sector, any business that would pay better salaries, in [U.S.] dollars if possible.”

The minutes of the military leaders’ meeting also showed Suarez Chourio was concerned about the impact of the killing of Perez, the CICPC policeman who rebelled against the Maduro regime.

The minutes show that officers were told to carry out “an information campaign” aimed at subordinates to “counteract the mass of opinions published in the news media and social networks” about the deaths of Perez and other members of “a terrorist group.”

The unrest generated by Perez’s death is much deeper within the CICPC, a police agency that does not appear to enjoy much trust from top government leaders.

In a sign of the mistrust, CICPC agents were not allowed to participate in the raid that led to Perez’s death, even though he had contacted his CICPC superiors notifying his intentions to surrender.

Reports from police officials, and Perez’s own videos as the raid developed, indicate that the government had ordered his death and sent the National Guard and National Bolivarian Police to carry out the raid.

“That is evidence of the mistrust between the regime and the CICPC,” said Helly Angel, a lawyer and criminologist who lives in South Florida.

The situation is different in the Bolivarian Police, Angel added, because its members are not career police officers but rather militants who act like protectors of the Hugo Chávez “revolution.”

Many members of the Bolivarian Police also belong to the pro-government paramilitary gangs known as colectivos, he added.