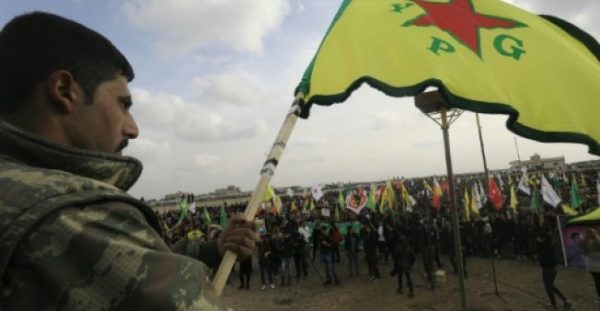 After Turkey assaulted a relatively peaceful Kurdish enclave of northern Syria, regional leaders fear the world will abandon them even though they provided the ground troops who beat the Islamic State group.

For the past four days, Turkish troops and allied Arab Islamist fighters have been battling their way into Syria’s Afrin canton, which is defended by the American-backed Kurdish YPG militia.

US leaders from President Donald Trump on down have appealed for restraint, but appear to have little influence over their NATO ally when it comes to its battle against the Kurds.

Now the Kurds, whose unofficial national motto admits they have “no friends but the mountains,” fear they will be the forgotten victims as Turkey, Russia and the United States maneuver for influence.

And this despite providing the backbone of the US-backed Syrian Democratic Forces (SDF) who gifted Trump his first military victory — the fall of the Islamic State capital, Raqa.

Sinam Mohamed, chief envoy of the “Rojava self-ruled Democratic Administration” which runs several cantons in the Kurdish-majority north of Syria, said she fears for her family in Afrin.

“For us, the United States has a moral obligation to protect the democracy in this area,” Mohamed told reporters in Washington.

For local leaders, the self-ruled Rojava area is an experiment in democratic federalism that could serve as an example for the rest of Syria to follow as it emerges from civil war.

But Turkey sees the Kurdish-led regions of northern Syria as a supply corridor for “terrorists” and a rear base for the banned PKK armed separatist movement it is fighting on home soil.

Mohamed insisted “not a single bullet” had been fired from Afrin towards Turkey and that if Turkey has a problem with the PKK it is a domestic issue and not a cross-border one.

More than 2,000 US special forces backed by air power work with the Kurdish YPG, under the banner of the Syrian Democratic Forces (SDF) east of the Euphrates to fight the Islamic State jihadist group.

But the YPG in Afrin, an isolated pocket west of the river, have no overt US military backing and — after Syria’s ally Russia apparently gave Turkey the green light to attack — they are under siege.

In the YPG-controlled area on the other bank of the Euphrates but still exposed to the long Turkish frontier, fighters are increasingly bitter about the US role.

“The Kurds fought Daesh, to defend the whole world, they coordinated with the US-led coalition,” said Omar Mahmoud, a 35-year-old YPG fighter. “Now the US is silent, and it’s disappointing.”

Another fighter, 34-year-old Massoud Baravi, and many of his comrades fear Turkey will be emboldened to attack Kurdish areas east of the Euphrates, where the YPG has routed the Islamic State group.

“We fought Daesh from the beginning, it was us who liberated the land from Daesh and now we’re the target of Turkish injustice,” he said.

“Now Turkish planes are bombarding Afrin, killing women and children on the pretext that we’re separatists, but we’re part of Syria! We can see the international silence. No one speaks for the Kurds.”

In Washington, there is some sympathy for the Kurdish plight.

Nauert said Secretary of State Rex Tillerson had a series of “serious and frank” conversations with his Turkish counterpart Foreign Minister Mevlut Cavusoglu.

“This area that we’re talking about was relatively stable given that was Syria,” she said of Afrin, dismissing Turkish claims that Islamic State fighters were there and urging “de-escalation.”

But whatever diplomatic noises Washington makes now that an apparently long-planned Turkish offensive is underway, Erdogan’s decision to go ahead underlines the limits of US influence.

Turkey may not have heeded the counsel of its NATO ally, but it could not have acted without the go-ahead from Russia’s President Vladimir Putin, chief backer of Syria’s Bashar al-Assad.

Russia, which has its own forces in Syria alongside Assad’s remaining loyalists and Iranian-led Shiite militia, has lured Turkey into a Moscow-led effort to end Syria’s civil war, now entering its eighth year.

This is running in parallel to — and arguably fatally undermining — US-backed United Nations peace talks in Geneva aimed at agreeing on a political transition that could see Assad fall.

But Turkey and Erdogan have a role in the Russian effort, and are resentful of US ties to the Kurds, and Erdogan appears to have entered into a deal with Putin to take Afrin.

Kurdish leaders told AFP that Moscow had offered to protect them from Turkey if they returned their area to the control of the Assad regime and when they refused, Russian forces withdrew air cover.

“Turkey has essentially the whole Geneva process working with the US and even the Western bloc on Syria,” analyst Merve Tahiroglu of the Foundation of Defense of Democracies told AFP.

Despite working with Russia’s “Astana process” to retain influence in Syria, Turkey has clashed with Russia over the role of the Kurds — which Moscow hoped to win over to Assad’s fold.

Turkey’s price, therefore, for supporting the process was dropping the Kurds, Tahiroglu believes, and Russia gave the green light for the Afrin operation after striking a deal.

This deal will likely involve some kind of a de-escalation agreement between the Syrian regime and Turkish-backed rebels in the Idlib area, which in turn will free up Arab fighters to battle the Kurds.