2 US allies are killing each other in Syria ! 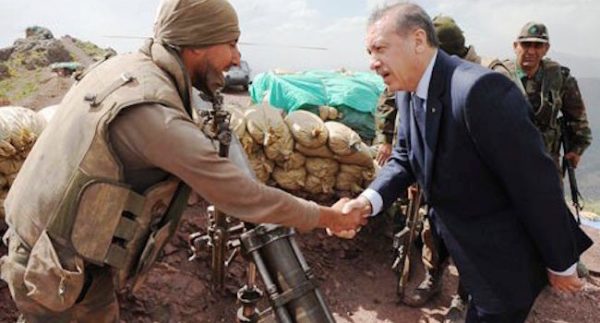 Turkish President Recep Tayyip Erdogan has been caught funding ISIS militants in order to advance his Mid
Share:
BY By Alex Ward
For the past five days, a NATO ally has attacked one of America’s staunchest anti-ISIS partners in Syria — putting the US in a very awkward position.

Turkey — one of the NATO alliance’s oldest members — started last Friday sending troops and more than 70 bomber planes into Northwestern Syria to wrest control of the area from Syrian Kurds. Much of the fighting has taken place around Afrin, a city controlled by a Kurdish political party and its military affiliate, the People’s Protection Units (YPG).

Turkey’s goal is to establish an approximately 19-mile “safe zone” between Kurdish-controlled territory and the Turkish border. Ankara has been fighting a decades-long insurgency against Kurdish separatists inside its own country, and thus considers the powerful Kurdish forces near its border to be a looming terrorist threat to the country.

This complicates two of America’s most important alliances in the Middle East. The US and Turkey are close friends because of their NATO relationship and their mutual campaigns against ISIS. But America is also close to the Syrian Kurds, who have emerged as one of Washington’s most vital battlefield partners in the anti-ISIS fight. Last October, Syrian Kurdish fighters helped the US take Raqqa, the Syrian city that ISIS considered the capital of its so-called caliphate.

But experts tell me the US may have laid the groundwork for Turkey’s assault. Last week, the US announced it would help train a 30,000-strong, Kurdish-led border force in Syria. And on January 17, Secretary of State Rex Tillerson said in a high-profile speech that American troops would remain in Syria indefinitely to keep ISIS down and push back against Iran’s growing regional influence.

Turkey vehemently opposed both plans and likely used the news as pretext for a long-planned campaign against the Kurds. “Ankara saw an opening and took it,” Aaron Stein, a Turkey expert at the Atlantic Council think tank, said in an interview.

That means the US now has to play a dangerous game: Try not to anger Turkey any further while still showing support for its Kurdish friends. But more than that, it shows how the Trump administration completely misread Turkey’s intentions to attack the Kurds — despite Ankara’s repeated statements that it was serious.

“We constantly look like fools to everybody,” James Jeffrey, the US ambassador to Turkey from 2008 to 2010, told me.

Ankara believes the Syrian Kurds are deeply tied to a Turkish Kurdish group that has waged a bloody fight for autonomy from Turkey since the late 1970s. Turkey and the United States label that group, known as the Kurdistan Workers’ Party, or PKK, as a terrorist group.

But the Syrian Kurds have been an effective force in the fight against ISIS, garnering great support in Washington. The Obama administration considered arming the militia in 2016. And in May 2017, President Donald Trump announced that the US would arm the Syrian Kurds over Turkey’s objections.

Shortly after the announcement, Turkish officials told the Trump administration behind closed doors that it would attack the Kurds. However, Turkish President Recep Tayyip Erdoǧan didn’t order a strike at that time — though he warned for months that one might be imminent.

The US made matters worse with its two recent announcements: the training of the Kurdish border force and the decision to keep US troops in Syria with no withdrawal date. As Jeffrey told me, the Trump administration failed to coordinate both moves with Ankara. That blindsided, and therefore further angered, Turkish officials.

Secretary of State Rex Tillerson tried to assuage Turkey’s fears about the border force, claiming, “We are not creating a border security force at all” during an interview with reporters.

Erdoǧan doesn’t buy that, and has threatened further action. “Turkey will suffocate this terror army before it’s born,” Erdogan said on January 14. “Our preparations have been completed. The operation is due to start any moment. After that, other regions will follow.” And on January 18, just one day after Tillerson’s speech — Turkish Foreign Minister Mevlüt Çavuşoğlu said the Turkish military would continue its preparations for an attack.

The biggest sign that Turkey was serious was when Turkey’s military chief of staff, Hulusi Akar, asked Russian officials for permission to go forward with the assault. Russia has military control of the skies above the Afrin area and Turkey didn’t want to risk the downing of its planes. And Turkey even has a name for its campaign: Operation Olive Branch.

So now it appears Turkey has followed through on its year-long threat to attack the Kurds. Perhaps the Trump administration didn’t believe Turkey was actually serious — but these attacks are a warning to listen closely to Ankara’s concerns.