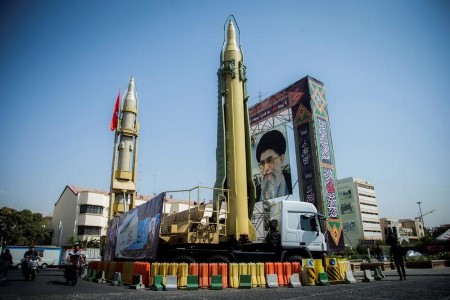 The United States on Thursday placed sanctions on five subsidiaries of an Iranian industrial group that is considered key in the development and production of the country’s ballistic missiles.

The sanctions imposed by the Office of Foreign Assets Control, an arm of the Treasury Department, targeted companies that are owned or controlled by the Shahid Bakeri Industrial Group, an Iranian defense entity that already is under U.S. sanctions.

Last month, Nikki Haley, the U.S. ambassador to the United Nations, showed reporters fragments from missiles that had been launched by Yemeni rebels into Saudi Arabia. One shredded fragment had the Shahid Bakeri logo on it, seeming proof that it was manufactured in Iran.

The new sanctions come after a week of anti-government protests that have spread across Iran in towns and small cities that previously were considered bulwarks of government support. President Trump has tweeted his support for the protesters and criticism of the government, warning that “the world is watching.”

With more than 20 people dead in the government response to the protests, the Trump administration is considering whether to impose new sanctions related to human rights abuses.

In addition, Trump must decide by Jan. 15 whether to recertify Iran’s compliance with the 2015 nuclear deal with world powers, which he decided not to do in October. He also must decide whether to waive U.S. nuclear-related sanctions that were suspended under the landmark agreement. If he decides not to waive sanctions and to reimpose them, the United States would be violating the commitments it made and, in effect, walking away from the agreement.

The sanctions prohibit all Americans from dealing with the named organizations, and any assets they have in the United States may be frozen. The most significant impact, however, is that any international bank doing business with the sanctioned firms can be heavily penalized because most international transactions are conducted at least partially in U.S. dollars.