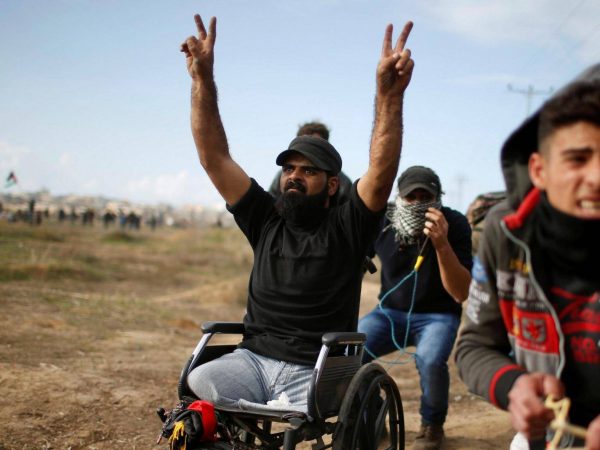 Ibraheem Abu Thuraya had lost his legs and a kidney in an air strike in 2008 Reuters.
Share:

The UN’s human rights chief has criticised the killing of a disabled Palestinian protester at the border fence between Gaza and Israel, saying evidence gathered by his staff points to the use of “excessive” force.

Zeid Ra’ad Al Hussein said he was “truly shocked” at the killing of Ibrahim Abu Thuraya by Israeli security forces, and has called on Israel to launch an independent investigation into the incident, which took place 15 November.

The Palestinian Authority’s health ministry said Mr Thuraya was shot just east of Gaza City, with the Israeli army saying it opened fire on the “main instigators” of violent protests at the Gazaborder.

Protests have erupted throughout the West Bank, including East Jerusalem and in occupied Gaza, since Donald Trump‘s decision earlier this month to officially recognise Jerusalem as Israel’s capital.

The response by Israel has left five people dead and hundreds injured and led to mass arrests of Palestinians, the Office of the United Nations High Commissioner for Human Rights (OHCHR) said.

“The facts gathered so far by my staff in Gaza strongly suggest that the force ustyhued against Ibrahim Abu Thuraya was excessive,” Mr Zeid said. “International human rights law strictly regulates the use of force in the context of protests and demonstrations.