Trump has forgotten his pledge in designing his tax plan: “America is Last not First”

BY MATTHEW GARDNER
When President Trump announced in his inauguration speech that he would pursue a policy of “America First,” some people probably liked it while others feared it sounded too isolationist or perhaps even xenophobic. But even his most ardent supporters might be taken aback to hear that the president seems to have forgotten his “America First” pledge in designing his tax plan.

It’s now widely understood that despite the president’s repeated claims, his tax plan is not even remotely targeted toward the middle class. Analyses by my organization, the Institute on Taxation and Economic Policy, and others agree that the best-off Americans would receive tax cuts far outstripping the meager shares going to Americans in the middle of the income distribution. The top 1 percent alone would see a breathtaking $85 billion tax cut in 2019 under the plan Trump is expected to sign this week. The rest of the top 20 percent would enjoy $140 billion in cuts.

But our analysis also shows the middle class aren’t even the next biggest beneficiaries of the Trump plan’s largesse. That privilege goes to investors from other countries, who would, as a group, enjoy $48 billion of tax cuts in 2019. The middle 20 percent of the income distribution would see barely half of this haul, with a total tax cut of $25 billion in the same year. And the poorest 40 percent of Americans would get barely a third of the tax cuts reserved for foreign investors, with an expected tax cut totaling just $16 billion. 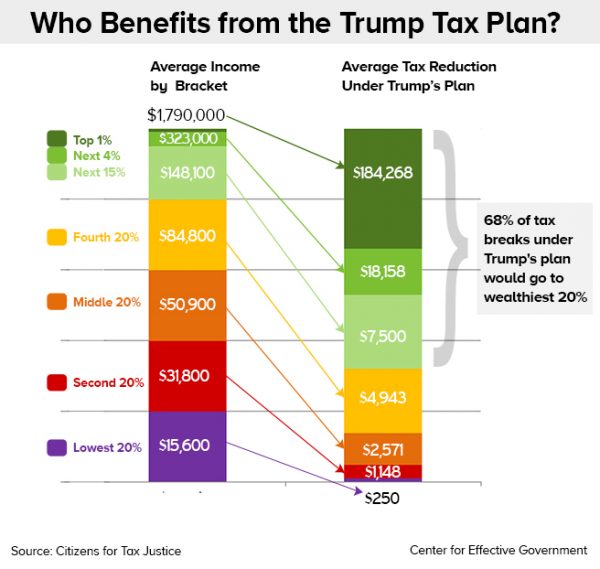 How can the president’s tax plan be more generous to foreigners than to the entire middle-class population of the United States? The answer lies in Trump’s choice to make corporate tax cuts the focal point of his plan. The final bill cuts the corporate tax rate from 35 percent to 21 percent and introduces a variety of new tax avoidance opportunities for big multinational companies. Mainstream economists agree that the main beneficiaries of a corporate tax cut are the shareholders of the companies that pay the tax. And while many Americans own small amounts of corporate stock, the vast majority of stock is owned by wealthy households and not the middle-class.

But it turns out that a surprisingly large share of this stock is owned by foreign investors. Recent research estimates the foreign-owned share to be 35 percent of the total. That means any corporate tax cut will benefit foreign investors.

Of course, the tax plan also includes a variety of tax cuts targeted to individuals. While many of these (most notably the new tax break for “pass-through” business income) also are geared toward the wealthy, these provisions offer benefits to some middle-income families as well. But the new individual tax breaks for the middle class are still dwarfed by the corporate breaks being shipped to foreign shareholders from Australia to Zambia.

This “America last” tendency in the Trump tax plan will become more pronounced over time. Because the individual tax cuts in the plan are set to expire after 2025 and the corporate rate cuts are permanent, we foundthat the bottom three-fifths of Americans will see a net tax increase, on average, by 2027. But the best-off Americans who hold the lion’s share of corporate stock — and their foreign compatriots — will continue to enjoy huge tax cuts going forward.

If you’re wondering why Congress is creating this confusing mess, there’s a straightforward explanation: our elected officials appear far more interested in giving tax cuts to the owners of businesses than in directly affecting the lives of middle-income families. And our leaders’ blind faith in the stimulative effect of corporate tax cuts appears insensitive to the question of whether these corporations, or their owners, are residents of the United States or the United Arab Emirates.

While the tax plan’s provisions for individuals have morphed dramatically over the course of the past year, the unshakeable bedrock of the plan has been sharp tax cuts for big corporations. So, the policy of Trump and his allies in Congress is not “America First.” It’s “shareholders first — no matter where they live.”

Matthew Gardner is a senior fellow at the Institute on Taxation and Economic Policy, a national research organization that focuses on federal and state tax policy.
THE HILL