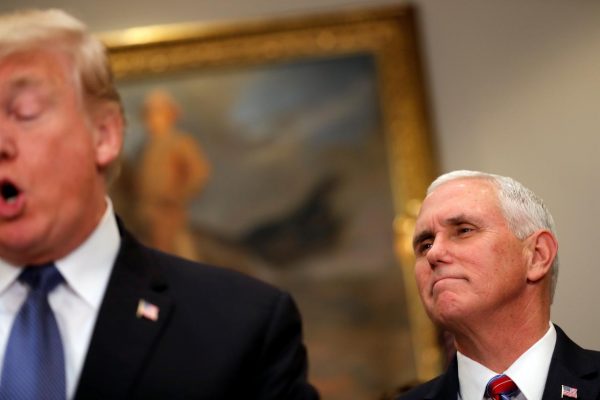 Vice President Mike Pence is delaying his visit to Israel and Egypt until 2018, his office announced on Monday.

Pence was originally scheduled to depart over the weekend, but the trip was delayed until this week so that he could preside over the upcoming Senate vote on tax code changes. On Monday, the trip was pushed off again and Pence will not make the visit before the new year.

“The largest tax cut in American history is a landmark accomplishment for President Trump and a relief to millions of hardworking Americans,” his office said in a statement. “The Vice President is committed to seeing the tax cut through to the finish line. The Vice President looks forward to traveling to Egypt and Israel in January.”

The visit was shaping up as something of a victory lap for Pence, after the White House’s decision to officially recognize Jerusalem as the capital of Israel — a decision that has roiled allies around the globe but that was long a priority for Pence.

He was originally scheduled to meet with Palestinian Authority President Mahmoud Abbas on the trip, but neither Abbas nor the head of Egypt’s largest Christian church , nor the head of Cairo’s al-Azhar mosque, Sunni Islam’s top seat of learning wanted to meet Pence , in protest over the U.S. declaration that Jerusalem is the capital of Israel.

Trump’s decision, presented as being in “the pursuit of peace between Israel and the Palestinians,” has been denounced across the Arab world. Members of the UN Security Council condemned the move  as contradicting international law and prejudging the outcome of negotiations.

Pence is  still slated to meet with Prime Minister Benjamin Netanyahu of Israel, address the Israeli Knesset and meet in Egypt with President Abdel Fattah el-Sisi.

“We call for angry protests at the entrances to Jerusalem and in its Old City to coincide with the visit on Wednesday of U.S. Vice President Mike Pence and to protest against [U.S. President Donald] Trump’s decision,” Fatah said Saturday.