Syrian opposition to stick to demand Assad go at start of transition: report 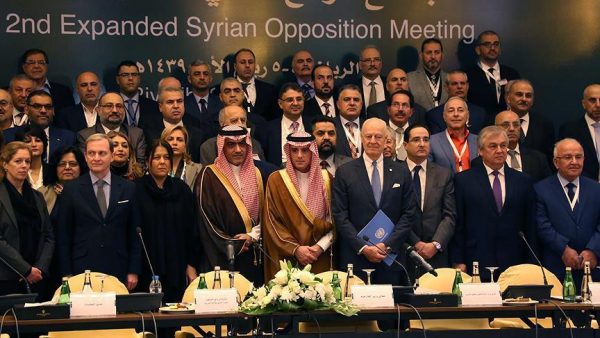 Syrian opposition groups will stick to their demand President Bashar al-Assad leave power at the start of any political transition, Al Arabiya television reported on Wednesday, despite speculation they could soften their stance in light of the government’s strength on the battlefield.

The opposition groups were meeting in Saudi Arabia to seek a unified position ahead of U.N.-backed peace talks, after years in which Russian military intervention has helped the government recapture all of Syria’s major cities.

Two days before the meeting, the leader of the High Negotiations Committee (HNC) that has represented the opposition at previous peace talks quit abruptly, giving rise to speculation that Assad’s opponents might seek a softer stance.

HNC chief Riyad Hijab had been known as an uncompromising defender of the position that Assad must have no role in any political transition for Syria.

However, a draft of the meeting’s final statement still included the demand that Assad leave office at the start of any transition, Saudi-owned Al Arabiya television reported.

The opposition meeting came a day after a surprise visit by Assad to Russia to meet President Vladimir Putin, who later discussed the conflict with U.S. President Donald Trump and other Middle East leaders.

Syria’s six-year civil war has killed hundreds of thousands of people and created the world’s worst refugee crisis, driving more than 11 million people from their homes.

All efforts to achieve a diplomatic solution have failed, with the opposition demanding Assad leave power and the government insisting he stay on.

For many years, Western and Arab countries backed the opposition demand that Assad leave power. However, since Russia joined the war on behalf of Assad’s government three years ago, Damascus has recaptured all of Syria’s major cities from anti-Assad rebels, making it increasingly clear that Assad’s opponents have no path to victory on the battlefield.

United Nations peace talks mediator Staffan de Mistura urged the opposition figures gathered at a five-star hotel in Riyadh to have the “hard discussions” necessary to reach a “common line”.

“A strong, unified team is a creative partner in Geneva and we need that, one who can actually explore more than one way to arrive to the goals that we need to have,” he said in opening remarks, referring to the next round of U.N.-sponsored talks.

De Mistura will meet Russia’s defense and foreign ministers on Thursday to discuss preparations for a new round of Geneva talks and a proposed congress on Syria in the Black Sea port of Sochi, according to Russian news agency RIA.

The Riyadh summit was open to more than 140 opposition figures representing a number of groups, including the HNC.

Russia said on Tuesday that the resignation of such “radically minded” Syrian opposition figures as HNC leader Hijab would help unite the disparate opposition factions around a more “realistic” platform.

Some opposition members had hinted that the final communique could drop any mention of Assad, softening the long-standing demand by the Riyadh-based opposition that the president have no role in any transition.

Saudi Foreign Minister Adel al-Jubeir said the only solution to the conflict was through a consensus that would achieve the demands of the Syrian people.