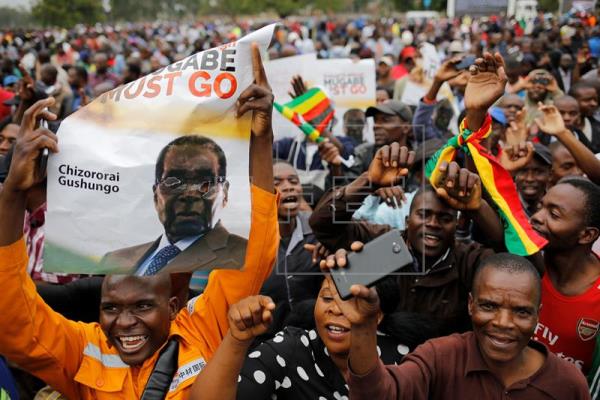 Thousands of Zimbabweans took to the streets of the capital Harare to demand the resignation of the country’s long-ruling president. Carrying signs reading “Mugabe Must Go” and “#Freshstart”, jubilant Zimbabweans of all ages were out in force to show their opposition to the decades-old Mugabe regime and to celebrate the army’s takeover
Share:
Zimbabwe’s President Robert Mugabe came under increasing pressure to quit Monday as his ruling party said it would move to impeach him and the army revealed his likely successor would soon return to the country.

In a televised address late Sunday, the 93-year-old president had flouted expectations he would step down after the military’s takeover, pitching the country into a second week of political crisis.

Lawmakers from his ruling ZANU-PF party said that they would take the first steps on Tuesday to force Mugabe from office after he ignored their ultimatum to resign.

“We want to get rid of this animal called Mugabe. We have the numbers, the opposition is also going to support us,” said ZANU-PF MP Vongai Mupereri.

“We are going to impeach — the man has to go,” said another government MP, MacKenzie Ncube, speaking to AFP after a meeting of lawmakers who until recently were his fiercely loyal supporters.

On Monday evening, army chief Constantino Chiwenga said that progress had been made in talks towards an apparent deal over Mugabe’s exit.

Chiwenga also said the president was in touch with Emmerson Mnangagwa, the ousted vice president whose sacking triggered the military takeover and Mugabe’s loss of power.

“The security services are encouraged by new developments which include contact between the president and the former vice president… who is expected in the country shortly,” Chiwenga said.

“Thereafter the nation will be advised of the outcome of talks between the two.”

Chiwenga called for calm after Zimbabweans had celebrated Saturday at huge anti-Mugabe marches that would have been brutally repressed just a week ago.

Their joy quickly turned to despair as Mugabe brushed aside the turmoil, blithely declaring on Sunday he would chair a top-level meeting of the party that had just disavowed him.

Morgan Tsvangirai, the leader of the main opposition Movement for Democratic Change, called Mugabe’s speech a “complete reversal of the people’s expectations”.

Chris Mutsvangwa, head of the influential war veterans’ association, called for larger protests than those staged at the weekend in an effort to dislodge Mugabe.

“He’s lost his marbles,” he added.

Though Mugabe has struggled with public speaking in recent years, the wily statesman appeared alert and attentive as he delivered his address.

“It might take days and weeks, but Mugabe is on his way out,” said Charles Muramba, a 46-year-old bus driver.

The crisis erupted on November 13 after a factional squabble over the presidential succession erupted into the open.

Mugabe’s wife Grace, 52, secured prime position to succeed him when Mnangagwa, who is close to the military leadership, was fired.

After Mnangagwa fled abroad, the army took over the country and placed Mugabe under house arrest.

The army insists it has not carried out a coup, but rather an operation to arrest allegedly corrupt supporters of the highly ambitious first lady.

On Sunday ZANU-PF dismissed Mugabe as its leader and demanded he resign as head of state, naming Mnangagwa as the new party chief.

Chris Vandome, an analyst at the Chatham House think-tank, warned that further delays heightened the risk of disorder.

“The longer this goes on for, the more the likelihood of violence increases.”

Some sources suggest Mugabe has been battling to delay his exit in order to secure a deal that would guarantee future protection for him and his family.

Mugabe was a key figure in the war for independence and took office as prime minister in 1980, riding a wave of goodwill.

But his reputation was swiftly tarnished by his authoritarian instincts, rights abuses and economic ineptitude.

“What does appear clear is that Mugabe has lost the support of the people and of his party,” British Prime Minister Theresa May’s official spokesman said.