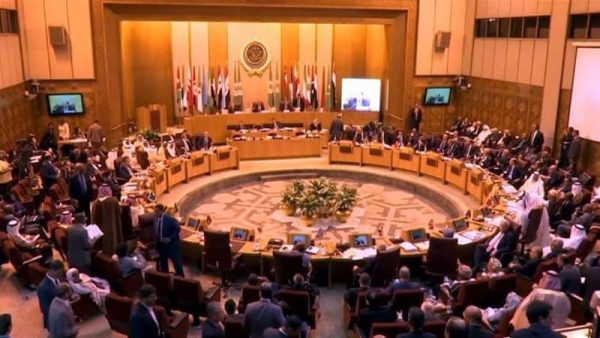 Saudi Arabia ramped up its campaign against Iran’s growing influence in the Arab World Sunday by persuading most of the 22 member states of the Arab League to condemn Iran’s Lebanese ally, Hezbollah, as a “terrorist organization.”

Arab foreign ministers gathered at the League’s headquarters in Cairo Sunday for an emergency meeting called by Saudi Arabia. Lebanon’s foreign minister, Gibran Bassil, did not attend, and the Lebanese representative at the meeting expressed reservations over the final communique.
Iraqi Foreign Minister Ibrahim Al-Jaafari also did not attend the meeting. Iran, along with the US-led international coalition, has been a major supporter of Baghdad in its war against ISIS.
“We want to hold everyone responsible,” Bahraini Foreign Minister Khalid bin Ahmed Al-Khalifa said during the deliberations. “We want to hold countries where Hezbollah is a partner in government responsible, specifically Lebanon.” Al-Khalifa claimed that Lebanon “is subject to full control by this terrorist group.”
The cabinet, led by outgoing Lebanese Prime Minister Saad Al-Hariri, includes several ministers affiliated with Hezbollah.
Commenting on the Bahraini foreign minister’s statement, American University of Beirut professor Rami Khouri told CNN that “Hezbollah is certainly the single most powerful political group in Lebanon, where governance requires complex consensus building in which Hezbollah is clearly preeminent. But it is not in total control.”
This latest flare up between Saudi Arabia and Iran was sparked by a November 4 incident in which Iranian-supported Houthi rebels in Yemen fired a ballistic missile at Riyadh’s international airport. Saudi Arabia subsequently accused Hezbollah and Iran as being behind the attack. Both have denied any involvement in the incident. Relations between Saudi Arabia and Iran have been rocky since the 1979 Iranian revolution.
Saudi Arabia subsequently expressed its anger at Hezbollah, which maintains close ties with Iran. Saudi Minister for Gulf Affairs Thamar Sabah has warned the Lebanese they must choose “either peace, or to live within the political fold of Hezbollah.”
Hariri announced his resignation as prime minister of Lebanon on November 4 from Riyadh on the Saudi-funded Al-Arabiya news network, accusing Iran of destabilizing Lebanon and the region. Many Lebanese, including President Michel Aoun and Hezbollah Secretary General Hassan Nasrallah, have said they believe Hariri resigned under Saudi pressure.
Hariri flew to Paris Saturday and vowed to return to Lebanon to attend celebrations marking the country’s independence day on November 22.
It’s not clear whether Sunday’s Arab League meeting will translate into concrete action. The League is notorious for passing resolutions and issuing communiques which are rarely acted upon. It is, however, the first time the Arab League has taken such a strong public stand against Hezbollah.
Reacting to the emergency meeting, Iranian Foreign Minister Javad Zarif said, “Unfortunately countries like the Saudi regime are pursuing divisions and creating differences, and because of this they don’t see any results other than divisions.”
While the Arab foreign ministers deliberated in Cairo, Iran’s growing power across the region was on display in Syria. On Sunday evening Hezbollah’s media unit posted on YouTube a video of Qassem Suleimani, the powerful head of Iran’s Quds Force, meeting with what appeared to be Iraqi, Lebanese and Syrian fighters in the newly liberated Syrian town of Albu Kamal. The town, on the Iraqi-Syrian border, was the last significant population center in Syria to be held by ISIS.

Iranian forces have played a key role in backing the regime of Syrian President Bashar Al-Assad in its war against the rebels and ISIS.