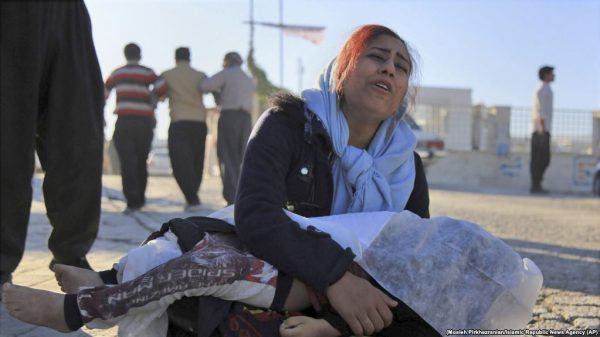 In this photo provided by Islamic Republic News Agency, IRNA, a woman moans as she holds the body of her daughter, who was killed in an earthquake, in Sarpol-e-Zahab, in western Iran, Monday, Nov. 13, 2017. A powerful 7.3 magnitude earthquake that struck the Iraq-Iran border region killed more than five hundred people in both countries, sent people fleeing their homes into the night and was felt as far west as the Mediterranean coast, authorities reported on Monday. (Mosleh Pirkhezranian/Islamic Republic News Agency,IRNA, via AP)
Share:

Exhausted and exposed to freezing cold, survivors of a weekend earthquake in western Iran begged authorities for food and shelter on Tuesday, saying aid was slow to reach them.

Iranian officials called off rescue operations earlier in the day on the grounds that there was little chance of finding more survivors from the quake, which killed at least 530 people and injured thousands of others. It was Iran’s deadliest earthquake in more than a decade.

Survivors, many left homeless by Sunday’s 7.3 magnitude quake that struck villages and towns in Kermansheh province  ( regarded as part of Iranian Kurdistan) along the mountainous border with Iraq, struggled through another bleak day on Tuesday in need of food, water and shelter.

Iran has so far declined offers of foreign assistance to deal with the aftermath of the tremor, which officials said damaged 30,000 homes and completely destroyed two villages.

“We are hungry. We are cold. We are homeless. We are alone in this world,” a weeping Maryam Ahang, who lost 10 members of her family in the hardest hit town of Sarpol-e Zahab, told Reuters by telephone.

“My home is now a pile of mud and broken tiles. I slept in the park last night. It is cold and I am scared.”

Thousands of people huddled in makeshift camps while many others chose to spend another cold night in the open because they feared more tremors after some 230 aftershocks.

In some areas, no building was left standing and those that were had been deserted for fear they could come crashing down at any moment. Houses in impoverished Iranian villages are often made of concrete blocks or mudbrick that can quickly crumble and collapse in a strong quake.

State television aired footage of weeping villagers carrying away bodies wrapped in bloodied blankets and bed sheets and scrabbling with their bare hands through rubble in search of friends and relatives.

“It was my cousin’s birthday … All the relatives were there…like 50 people. But now almost all are dead,” Reza, who refused to give his full name, told Reuters from Sarpol-e Zahab town. He lost 34 members of his family on Sunday.

“We spent two nights in the cold. Where is the aid?”

On the Iraq side of the frontier, nine people were killed and over 550 injured, all in the northern Kurdish provinces.

Television showed rescue workers combing through the rubble of dozens of villages immediately after the quake. But by Tuesday morning Iranian officials said there was no longer any likelihood of finding survivors and called off the search.

Hospitals in nearby provinces took in many of the injured, state television said, airing footage of survivors waiting to be treated. Hundreds of critically injured were dispatched to hospitals in Tehran.

Iran’s Red Crescent said emergency shelter had been provided for thousands of homeless people but a lack of electricity and water, as well as blocked roads, hindered aid supply efforts.

“People in some villages are still in dire need of food, water and shelter,” said Faramraz Akbari, governor of Qasr-e Shirin county in Kermanshah province.

“It is cold. My children are freezing. We have water and food but no tent. The quake did not kill us but the cold weather will kill us,” a woman in her 30s said. The mayor of the city of Ezgeleh said 80 percent of its buildings had collapsed. Survivors desperately needed tents with elderly people and babies as young as a one-year-old sleeping in the cold for two straight nights.

“People are hungry and thirsty,” a local man told ISNA news agency. “There is no electricity. Last night I cried when I saw children with no food or shelter.”

Some people were angry that among the collapsed buildings were homes built under an affordable housing scheme initiated in 2011 by then-President Mahmoud Ahmadinejad. Rouhani has repeatedly criticized the project for damaging the economy.

“The people should build their own houses. They build better houses than those built under projects and schemes,” Rouhani said in Kermanshah, state TV reported. “I promise you, those responsible will be punished.”

Iran is crisscrossed by major geological fault lines and has suffered several devastating earthquakes in recent years, including a 6.6 quake in 2003 that reduced the historic southeastern city of Bam to dust and killed some 31,000 people.