Trump releases some, but not all, JFK assassination records. No smoking gun expected 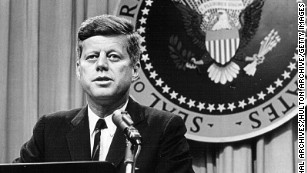 Washington , DC – President Donald Trump on Thursday agreed not to release the full tranche of records relating to the assassination of President John F. Kennedy, acquiescing to last-minute requests from national security agencies that some of those records remain secret.

The US government released over 2,800 recordsThursday night in an effort to comply with a 1992 law mandating the documents’ release, but kept roughly 300 files classified out of concern for US national security, law enforcement and foreign relations. In a memo, Trump directed agencies that requested redactions to re-review their reasons for keeping the records secret within 180 days.
Still, Trump’s decision to keep some documents secret is likely to keep conspiracy theories alive, fueling those who have long questioned official conclusions about the assassination and argued that the government has helped cover up the truth.

An initial review of some of the previously classified documents shed some light on the circumstances surrounding the Kennedy assassination.

One document revealed that the CIA intercepted a call Kennedy assassin Lee Harvey Oswald made to a KGB officer at the Russian Embassy in Mexico less than two months before killing Kennedy and that CIA agents speculated that he might be a KGB agent.

Oswald spoke to an “identified KGB officer,” Russian Consul Valeriy Vladimirovich Kostikov “in broken Russian.”
The report says “It is not usual for a KGB agent on a sensitive mission to have such overt contact with a Soviet Embassy,” but adds “such contact in official installations may be caused by the agent’s own carelessness.”
The files also revealed new information about threats the FBI received against Oswald after he was arrested.

Hoover said on November 24, 1963, he “received a call in our Dallas office from a man talking in a calm voice and saying he was a member of a committee organized to kill Oswald,” information the FBI shared with the Dallas chief of police.
“He again assured us adequate protection would be given. However, this was not done,” Hoover said.
Oswald’s killer Jack Ruby has maintained that he acted alone and it was not clear if Ruby had made the threat to the FBI’s Dallas office.

What will remain secret?

In his letter, he says more information should eventually be released.
“The American public expects and deserves its government to produce as much access as possible to the John F. Kennedy assassination records,” he wrote.

“I am ordering today that the veil finally be lifted” on the records, the memo said. “At the same time, executive departments and agencies have proposed to me that certain information should continue to be redacted because of national security, law enforcement, and foreign affairs concerns. I have no choice — today — but to accept those redactions rather than allow potentially irreversible harm to our nation’s security.”
Trump is permitted to block the release of certain documents if he finds “an identifiable harm to the military defense, intelligence operations, law enforcement or conduct of foreign relations” and if “the identifiable harm is of such gravity that it outweighs the public interest in disclosure,” according to the President John F. Kennedy Assassination Records Collection Act of 1992.
The deadline comes 25 years after the enactment of that law, which mandated the release of all government documents related to the Kennedy assassination in an attempt to quell conspiracy theories that have long swirled around the assassination.
But as deadline day came on Thursday, US intelligence and law enforcement agencies continued to make last-minute requests, resulting in a “messy” process in the final hours of the deadline, a senior US official told CNN.
The White House did not receive all of the requests until mid-day Thursday. That left Trump’s aides scrambling to funnel all of the information to the President, who had only a few hours to decide how to proceed.
Administration officials said the sensitive information that will remain redacted for now relates to “intelligence, law enforcement and other details.” That includes the identity of individuals involved in the investigation into the assassination, their roles as informants to law enforcement and information about foreign partner organizations that were involved in the investigation, a senior administration official said.

“The President heard those justifications from the agencies that requested the continuing postponement and he acknowledged that information … requires protection,” the official said.
Agencies requesting continued redaction of certain documents will need to submit a report to the US Archivist by March 26, 2018, explaining why those documents meet that standard, the White House said. Documents determined to not meet those standards will need to be released by April 26, 2018.
By setting a new deadline in 180 days, Trump’s team is hoping to enforce greater accountability from the agencies to get them more thorough accounting for their reasoning on keeping some of the records redacted.

What are historians looking for

Historians who have closely studied the Kennedy assassination have said they do not expect the documents to reveal any bombshells or to contradict the conclusion that Lee Harvey Oswald was solely responsible for killing Kennedy. Still, the files will give Americans a fuller picture of how the 35th US president was killed and the ensuing investigation into his assassination.

“There’s going to be no smoking gun in there,” Gerald Posner, the author of “Case Closed: Lee Harvey Oswald and the Assassination of JFK,” told CNN’s Michael Smerconish on Saturday. “Anybody who thinks this is going to turn the case on its head and suddenly show that there were three or four shooters at Dealey Plaza — it’s not the case.”
“Oswald did it alone,” Posner continued. “But what the files are doing and why they’re important to come out is they fill in the history of the case and show us how the FBI and CIA repeatedly hid the evidence.”
The CIA and FBI documents could also shed new light on Oswald’s mysterious trip to Mexico City weeks before the assassination. The files could also reveal new details about US involvement in attempts to assassinate Cuban President Fidel Castro, notably the CIA’s alleged ties to the mob as part of that effort.
Trump has been encouraged allow the full release of the files by several Republican figures in the lead-up to the document dump deadline.