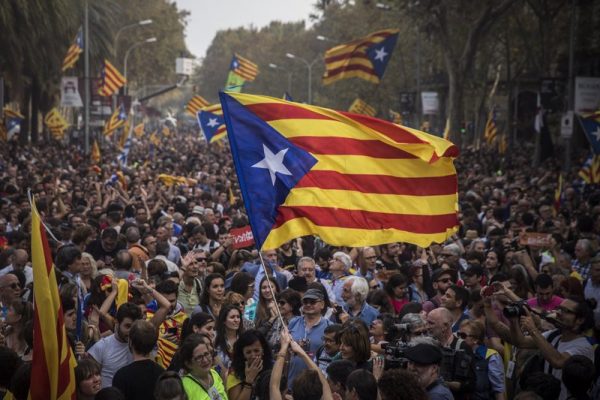 Spain faced a territorial showdown Friday with dueling votes over the future of Catalonia. Lawmakers in the regional parliament voted to secede and establish an independent Catalan Republic — an extraordinary move met moments later by a Spanish Senate vote to authorize the government to take control of the prosperous northeastern region.

It will be the first time in four decades of democratic rule in Spain that the national government in Madrid will directly run the affairs of one of the country’s 17 semi-autonomous regions, a move that will likely fan the flames of the Catalan revolt.

A spokesman with the central government said Rajoy’s Cabinet would enact the measures immediately during an urgent meeting later Friday. The spokesman requested anonymity because he wasn’t allowed to be named in the media.

In Barcelona, the main city in Catalonia, the vote on the motion to secede was approved with 70 in favor of independence, 10 against and two blank ballots in Catalonia’s 135-member parliament.

Separatist lawmakers in the regional parliament erupted in applause and chants when the chamber’s main speaker, Carme Forcadell, announced the motion passed. Lawmakers stood to chant the Catalan anthem, joined by dozens of guests, while Puigdemont and his vice president, Oriol Junqueras, exchanged congratulatory embraces and handshakes.

Outside the parliament, thousands who had gathered to call for independence cheered at the news, with some dancing and raising glasses to toast the vote after seeing the vote-counting live on a giant screen.

The motion that passed calls for beginning an independence process that includes drafting new key laws for Catalonia and opening negotiations “on equal footing” with Spanish authorities to establish cooperation.

“Today the parliament fulfilled the long-desired and fought-for step … in the days ahead we must keep to our values of pacifism and dignity. It’s in our, in your hands, to build the republic,” Puigdemont said.

Rajoy, who had delivered an impassioned speech at the Senate in Madrid earlier Friday urging the body to let his government take control of the region, immediately called for citizens to keep their heads.

“I call on all Spaniards to remain calm. The rule of law will restore legality to Catalonia,” he said on Twitter.

Rajoy says the measures to take over Catalan affairs are aimed at restoring order and has promised to call a new regional election once that is achieved.

No country has expressed support for independence for Catalonia, a region of 7.5 million people. Catalonia represents a fifth of Spain’s gross domestic product and polls show its people roughly evenly divided over independence. The regional government said a disputed Oct. 1 referendum, which was banned by Spain’s Constitutional Court, had given it the mandate to declare independence.

In Madrid, the conservative Spanish leader, who received sustained applause before and after his speech, told the chamber that Spain was facing a challenge not seen in its recent history.

What is happening in Catalonia is “a clear violation of the laws, of democracy, of the rights of all, and that has consequences,” Rajoy said.

Rajoy said his government’s first move would be to dismiss Puigdemont and his regional ministers if the Senate approves the Spanish government’s use of Article 155 of the Constitution. The special measures, he said, were the only way out of the crisis, adding that Spain wasn’t trying to take away liberties from Catalans but instead trying to protect them.

A spokesman with Spain’s prosecutor office, meanwhile, said the prosecutor would seek rebellion charges for those responsible for the Catalan independence vote.

The prosecutor was looking to determine if only the Catalan cabinet, including Puigdemont and Junqueras, will be charged, or if the target that would also include members of the parliament’s governing board and lawmakers, the spokesman said on condition of anonymity following internal rules.

He said the charges could be brought as early as Monday.

Under Spanish criminal law, rebellion can be punished by up to 25 years in prison, with shorter penalties if the rebellion doesn’t lead to violence.

The proposal approved in Barcelona had been submitted by the ruling Catalan Together for Yes coalition and their allies in the far-left CUP party. It stated that “we establish the Catalan Republic as an independent and sovereign state of democratic and social rule of law.”

The independence move was opposed by all opposition lawmakers, who walked out before the vote.

Carlos Carrizosa, spokesman for the pro-union opposition Citizens party, ripped a copy of the proposal into pieces during the debate ahead of the vote.

“With this paper, you leave those Catalans who don’t follow you orphaned without a government,” he said. “Today is a sad, dramatic day in Catalonia. Today is the day that you (secessionists) carry out your coup against the democracy in Spain.”

Marta Ribas of the leftist Catalonia Yes We Can party said “two grave errors” were being committed Friday.

“First, the Article 155, which will take away our rights and impact all the country. But it is a grave error to respond to that barbarity with an even bigger error,” she said. “The unilateral declaration of independence won’t protect us against Article 155, you will only make the majority of people suffer.”

Before the parliament session, large crowds of independence supporters gathered outside in a Barcelona park, waving Catalan flags and chanting slogans in favor of a new state.

“I am here today because we will start the Catalan Republic,” said 68-year-old protester Jordi Soler. “Madrid is starting with total repression — and there is no longer any (other) option.”