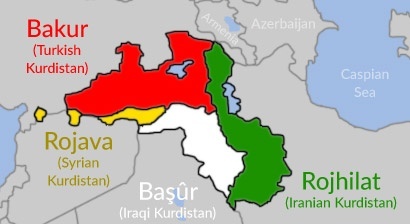 No country opposes the Iraqi Kurdish referendum more than the Islamic Republic of Iran. The reason is clear: Iranian leaders fear the precedent that Iraqi Kurds might set for Iran’s own restive Kurdish population.

With Soviet help, Kurdish nationalists carved the first modern Kurdish state out of the chaos of post-World War II Iran, declaring the self-styled Mahabad Republic on Jan. 22, 1946. It managed to survive for a year before Reza Shah — the father of the Iranian leader ousted in the 1979 Islamic Revolution — rallied his forces and crushed the would-be Kurdish state. Mulla Mustafa Barzani, father of de facto-Iraqi Kurdish leader Masoud Barzani, was one of four generals serving the short-lived republic.

Kurds in Iran again sought to assert nationalist claims against the backdrop of the 1979 Islamic Revolution, but they were unable to sustain their autonomy against the onslaught of Iranian forces. Some of the most brutal human rights violations during the Islamic Revolution happened in Iranian Kurdistan, and in a country with no shortage of internal repression, police and Islamic Revolutionary Guard Corps actions as well as executions are at their worst in Kurdish-populated regions of Iran.

In short, Tehran believes they cannot tolerate an example of ethnic self-determination along their borders lest the blowback undermine Iran’s own territorial integrity. Tehran knows that if given the choice, most Iranian Kurds would go their own way. That’s not the Iraqi Kurds’ fault, but it is reality.

The Iranian government has therefore been vocal in its opposition to the Kurdish referendum. IRGC Maj. Gen. Mohammad Bagheri, chief of staff for the Armed Forces of the Islamic Republic of Iran, told IRGC leaders assembled in Mashhad, Iran’s second largest city, earlier this summer that the referendum “is the beginning of the crisis and the new challenges in the region” and called the vote “unacceptable.”

There appears to be no difference between Iran’s military and political class on the issue. Iranian Foreign Ministry Spokesman Bahram Qassemi reiterated Bagheri’s warning in a July 2017 press conference. Iranian authorities also sent a not-so-subtle warning to Barzani when a note-taker for an Iranian delegation meeting the Kurdish leader was the triggerman in the 1989 Vienna assassination of Abdul Rahman Ghassemlou, the leader of the Kurdistan Democratic Party of Iran.

So, with Barzani defying Iran’s warnings and holding the referendum, what might the Islamic Republic of Iran do?

Already, Iranian authorities, like their Turkish counterparts, have severed the air links to Iraqi Kurdistan. While an inconvenience, this action won’t be more than symbolic unless Iran, Turkey, and Iraq proper join together to close their airspace to aircraft heading to Iraqi Kurdistan. Otherwise, Iraqi Kurds will simply choose other carriers as they travel to Dubai or Europe.

Nor is it likely Iran will formally send in its army; this simply isn’t Iran’s style. But, the Qods Force is lethal and it both knows the territory well and it has penetrated Iraqi Kurdistan’s peshmerga and intelligence services. Just as the IRGC’s Qods Force and Iranian-backed militias undermined post-liberation Iraq to tarnish the image of democracy, they will intervene surreptitiously in Iraqi Kurdistan to signal to Iran’s own Kurds that even talking about secession would be disastrous.

Iraqi Kurdistan prides itself on being safe and secure? Get ready for bombs in crowded markets and assassinations of Western businessmen and diplomats, many of whom have for too long let their guard down in the belief that Kurdistan is safer than it is. Given Iraqi Kurdistan’s dire financial position, it’s not unlikely that police and security guards can’t be bribed to look the other way.

Kurdish leaders themselves will not be immune. There has not been a major assassination in Iraqi Kurdistan since the 2004 murder of Sami Abdulrahman, Iraqi Kurdistan’s deputy prime minister, but that will likely change. Kurdish leaders both recognize the risks they face and, if the going gets tough, may not stay to face it.

For all of Massoud Barzani’s nationalist rhetoric, for example, members of his family and senior peshmerga fled Iraqi Kurdistan on commercial flights as it looked like the Islamic State could overrun Erbil in 2014. (To date, Barzani refuses to release the manifests from those flights or to hold accountable those who would have left Erbil to the Islamic State’s terror just as they enabled atrocities against the Yezidis when they withdrew from Mount Sinjar without first ensuring the Yezidis had the means to defend themselves).

In recent days, the Iranian press has reported that several Barzani family members have already decamped to the United Arab Emirates; hardly the move of the bold and patriotic. Those lobbying fiercest for the referendum — Masrour Barzani and Qubad Talabani, the son of former President Jalal Talabani — both have multimillion-dollar properties outside of Kurdistan.

Iraqi Kurdistan may also soon get a lot less comfortable. It runs largely on Iranian electricity, and its stores are stocked not only with Turkish but also Iranian goods. The drawback of being landlocked in a hostile neighborhood is not only the difficulty they will face when exporting oil, but also importing essential goods. When I first visited Iraqi Kurdistan in 2000, the government was able to provide about 3-4 hours of electricity per day, with a haphazard array of generators making up only some of the shortfall. Here, the past may once again be prologue.

Kurds will rejoice in their referendum victory, but it appears their honeymoon might be short-lived. The questions Kurds may soon face are first whether Iraqi Kurdistan’s best years are behind it, and second, whether they would have weathered the Iranian storm better had they united their defense and security forces ahead of time rather than left them with fissures Tehran can and will exploit.