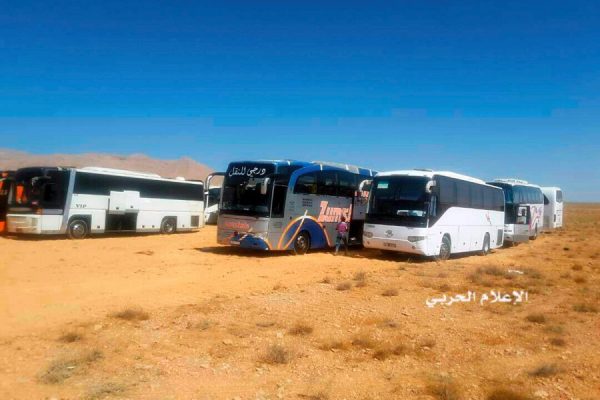 Islamic State (ISIS) militants and their families were allowed to  leave a border area between Lebanon and Syria on Monday as part of a  controversial deal negotiated  by the Iranian backed Hezbollah militant  group despite the fact that the terrorist group  killed all theLebanese  soldiers that it kidnapped  and took as hostages  in 2014.

An unidentified number of militants and their families headed in air-conditioned buses toward a town ( Abu Kamal  )held by the Islamic State group in far eastern Syria, near the border with Iraq. The evacuation will effectively end the presence of ISIS militants on the border, after al-Qaida-linked fighters evacuated earlier this month.

The Lebanese government and Hezbollah both cast the evacuation deal as a victory and a capitulation by IS but many in Lebanon, particularly the families of the dead soldiers, were bitterly opposed to the deal, which they said allowed their sons’ killers to leave in air-conditioned buses back to Syria.

The transfer comes nearly a week after the Lebanese army launched a military campaign to drive ISIS from the rugged mountainous area along its border with Syria.

The Syrian army and Hezbollah, which has been fighting alongside President Bashar Assad’s forces in Syria since 2013, have been waging their own separate but simultaneous offensive to pressure IS on the Syrian side of the border.

Nearly two dozen buses and 11 ambulances carried the militants and their families Monday from the area straddling the Syria-Lebanon border toward the IS-held town of Boukamal in eastern Syria.

Syrian Al-Ikhbariya TV reported that there were about 250 militants in the transfer. The Central Military Center, a media outlet run by Hezbollah, said ambulances ferried 25 IS wounded fighters from the area.

The Lebanese military on Monday took journalists on a tour of areas along the border near Ras Baalbek that were recaptured from IS in the past week. Soldiers, tanks and armored vehicles were heavily deployed along the border area, and caves used by IS bore signs of damage from the recent fighting. About 5,000 Lebanese soldiers took part in the offensive.

On Sunday, the Lebanese army, on one side, and Hezbollah and the Syrian army on another, declared separate but simultaneous cease-fires. Shortly afterward, the remains of seven soldiers were located and exhumed in an area near the border with Syria. The corpse of an eighth soldier is yet to be located amid reports that a ninth soldier had defected to IS. The bodies of five Hizbullah fighters killed while fighting the militants were also handed over, allowing for the transfer of militants.

Al-Ikhbariya said the Syrian government approved the transfer of militants to Abu Kamal to facilitate the talks over the fate of the soldiers.

Hezbollah chief Hassan Nasrallah tried  during a televised speech to defend the deal  and to respond to the angry statements by the families of the dead Lebanese soldiers.

“Statements claiming that Hezbollah was blackmailing the Lebanese army and state over the file of the captive troops have been issued… Those who commented did not hear my speech or it reached them taken out of its context.” He said
He added:

I understand the angry responses to my latest speech about the anti-IS battle, and we’ve been used to such remarks since the year 2000. There is a point related to Hezbollah’s credibility and this is something that we cannot take lightly.” A possible reference to the criticism Hezbollah has been facing since the Israeli  army withdrew from Lebanon in 2000.