Gorka, Bannon’s ally at the White House also fired and will join him at Breitbart 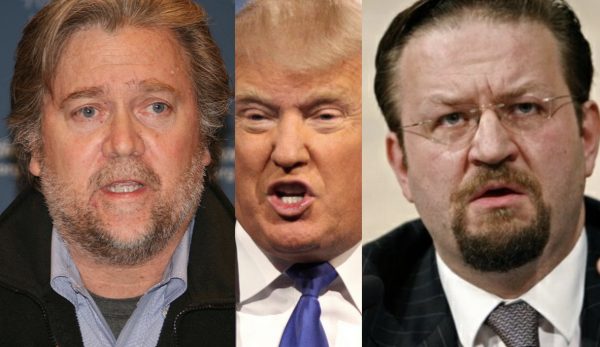 President Trump can run from the racism of Steve Bannon (L) and Sebastian Gorka (R) , but he reportedly can’t hide. Trump is has recently faced immense external pressure to dump them for being racists.
Share:

Gorka will be returning to the publication where he was once national security editor, reuniting him with Bannon, who also left the White House earlier this month.

“I will be working with you, with Steve, with the Breitbart crew,” Gorka said on an interview on SiriusXM with Breitbart editor Matthew Boyle.

Gorka announced that he was resigning from his position as special assistant to the president Friday night, although White House officials disputed the report and said he did not resign.

“[G]iven recent events, it is clear to me that forces that do not support the MAGA promise are — for now — ascendant within the White House,” Gorka wrote in a resignation letter.

“As a result, the best and most effective way I can support you, Mr. President, is from outside the People’s House,” he wrote.

Bannon also announced his return as executive chairman of Breitbart just hours after he was ousted from the White House.
Since then, the publication has stepped up its attacks on the Trump administration, running articles critical of top Trump officials like national security adviser H.R. McMaster, who often feuded with Bannon.
An email prankster pretending to be Bannon got Breitbart Editor-in-Chief Alex Marlow last week to pledge to help Bannon to do his “dirty work” by running stories critical of Trump officials like senior adviser Jared Kushner.
THE HILL
Share: