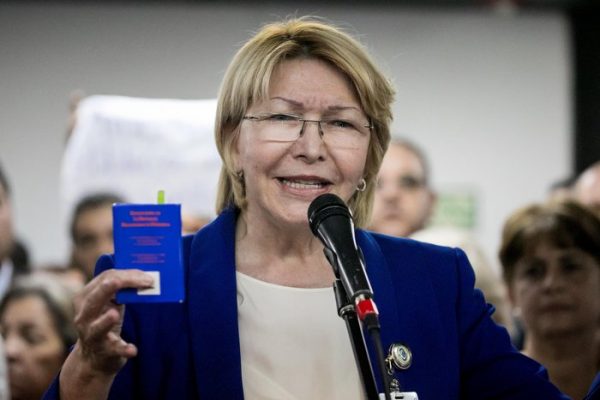 Venezuela’s recently ousted chief prosecutor accused President Nicolas Maduro and several allies on Wednesday of participating in acts of corruption, saying she would turn over proof that would help other countries prosecute.

Ortega spoke during a meeting of Mercosur trade bloc prosecutors in the Brazilian capital, Brasilia. Ortega was removed by a new, pro-government constitutional assembly in early August after breaking with Venezuela’s socialist government.

She fled abroad with her husband, whose arrest was ordered by the country’s supreme court.

“I want to denounce, in front of the world, a grave situation in Venezuela: that of excessive corruption,” Ortega said. “Because of that reason, (Maduro’s administration) is violating the constitution and law to protect itself.”

Ortega said she had evidence implicating Maduro and other top officials in corruption involving Brazilian constructor Odebrecht and other companies.

Ortega told reporters after the meeting that Maduro loyalist Diosdado Cabello received $100 million from Odebrecht via a Spanish company called TSE Arietis, which was owned by cousins of Cabello.

She also claimed that Maduro was the owner of a Mexican company that Venezuela had contracted to provide basic foodstuffs. She said Group Grand Limited was registered in Mexico under the names Rodolfo Reyes, Alvaro Pulido Vargas and Alex Saab, but that Maduro was the real owner.

Ortega’s claims could not be immediately verified. Emails sent to Group Grand Limited, TSE Arietis and Odebrecht seeking comment were not immediately returned.

“It’s impossible for cases to be investigated in Venezuela,” said Ortega, adding that she was providing documentation to the United States, Brazil, Colombia and Spain.

Odebrecht has been at the center of the massive “Car Wash” probe in Brazil involving kickbacks for contracts. Over the last three years, dozens of Brazil’s top politicians and businessmen have been jailed, including former Odebrecht CEO Marcelo Odebrecht.

The investigation has led to prosecutions in several countries in Latin America where Odebrecht and other Brazilian construction companies operated.

Saab called Ortega a “world tourist” who had been pushed out because of her own infractions.

Even if Ortega possesses strong evidence, however, it’s not clear whether it could hurt Maduro’s administration, which is already alienated from many of the region’s countries.

While Brazil shares information with other countries related to the “Car Wash” investigation, authorities say they leave the prosecution of foreign nationals to justice officials in those countries.

Ortega’s visit to Brazil, Latin America’s most populous nation and largest economy, came a day after Maduro claimed that she was working with Washington to damage his administration and said Venezuela would ask for an international arrest warrant for Ortega. It wasn’t immediately known if that had been requested or if it would be considered.

Mercosur has suspended Venezuela due to the crisis there.

Brazil’s foreign minister, Aloysio Nunes, told Globo News that Ortega would be “immediately” granted asylum if she asked for it. Ortega has not signaled that she would.

The opposition accuses Saab  , a Lebanese Venezuelan  of turning a blind eye  to human rights abuses  and a lurch into dictatorship by Venezuela’s unpopular President Nicolas Maduro.

In many of the big protests  marchers aimed to converge on his office, but security forces firing tear gas and water cannons blocked the crowds. Dozens have died the recent  unrest.

Venezuelans were shocked to see Saab’s son, a law student, publicly breaking ranks with his powerful father and saying he himself had been a victim of what he called government repression in marches.

“Dad: In this moment you have the power to end the injustice that has sunk this country,” said Yibram Saab in a video posted on YouTube on April 27 , in which he was seen sitting outside and reading from a piece of paper.

“I ask you as your son, and in the name of Venezuela that you represent, that you reflect and do what you must do. I understand, I know this isn’t easy, but it’s right the right thing to do,” added the young Saab.