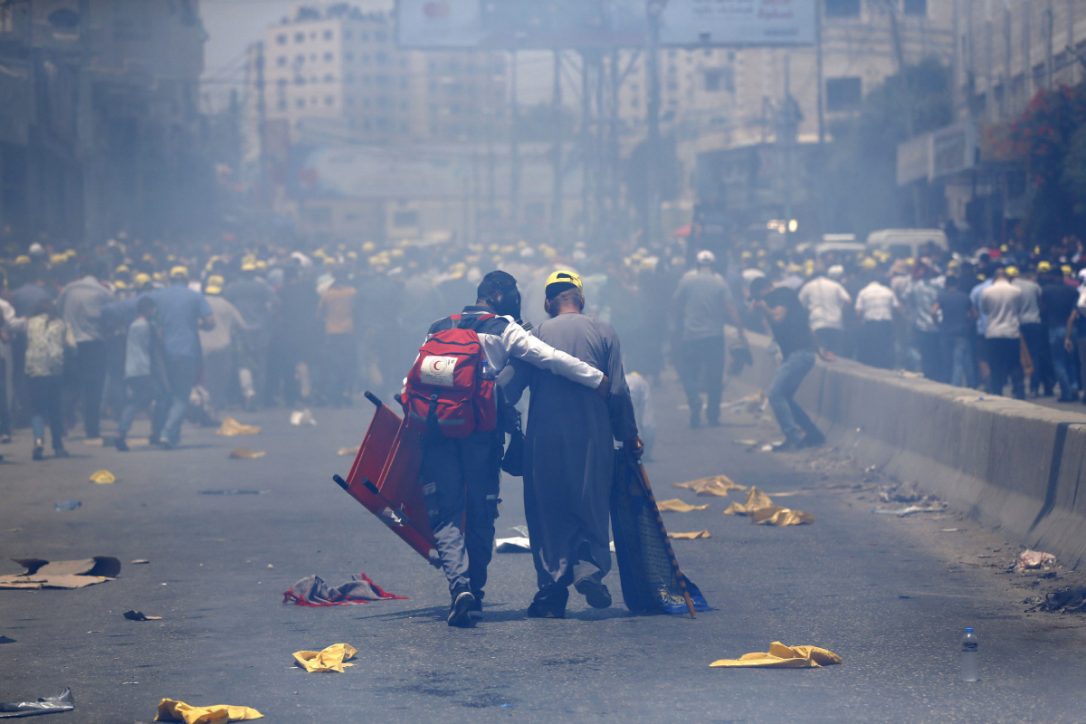 A Palestinian Red Crescent member aids a protester injured during clashes between demonstrators and Israeli security forces at the Qalandiya checkpoint, between Ramallah and Jerusalem, in the occupied West Bank, on July 21, 2017. (ABBAS MOMANI / AFP/GETTY IMAGES)
Share:

Israel sent more troops to the West Bank on Saturday, a day after a Palestinian stabbed to death three members of an Israeli family in their home and widespread Israeli-Palestinian clashes erupted over escalating tensions at the Holy Land’s most contested shrine.

The father of the 20-year-old Palestinian assailant said he believes his son was upset over the loss of Palestinian lives and wanted to protect the “honor” of the Jerusalem holy site.

A senior Israeli government official blamed the latest round of violence on what he said was Palestinian incitement against Israel and called on Palestinian leaders to help restore calm.

Disputes over the shrine, revered by Muslims and Jews, have set off major rounds of Israeli-Palestinian confrontations in the past. They were also at the root of the current violence which began last week when Arab gunmen fired from the shrine, killing two Israeli policemen.

In response, Israel installed metal detectors at the gates of the 37-acre (15-hectare) walled compound, portraying the devices as a needed security measure to prevent more attacks.

Muslims alleged Israel was trying to expand its control at the Muslim-administered site under the guise of security — a claim Israel denies — and launched mass prayer protests.

On Friday, anger boiled over and several thousand Palestinians clashed with Israeli security forces in the West Bank and in Jerusalem after noon prayers, the highlight of the Muslim religious week. Three Palestinians were killed and several dozen wounded by live rounds and bullets in some of the worst street clashes in two years.

On Friday evening, a Palestinian identified as Omar al-Abed jumped over the fence of the Israeli settlement of Halamish in the West Bank and entered a home, surprising a family during their Sabbath dinner.

The Israeli military said the assailant killed a man and two of his adult children, while a woman was wounded. A neighbor heard the screams, rushed to the home and opened fire, wounding al-Abed who was taken to an Israeli hospital, said the head of Israel’s rescue service.

A photo released by the military showed a kitchen floor covered with blood.

Itai Orayon, a medic, said he found “blood everywhere” in the house. He told Israel Army Radio that three people were on the floor, unconscious “with deep stab wounds all over their bodies,” and that the medical team was unable to save them.

On Saturday morning, Israeli troops searched the assailant’s family home in the West Bank village of Kobar and detained one of his brothers, the army said. Video footage released by the military shows soldiers leading away a handcuffed and blindfolded man.

The army said soldiers searched the house and measured it in preparation for demolition.

The assailant’s father said his son had been angered by the escalation at the Jerusalem shrine, known to Muslims as the Haram al-Sharif, or Noble Sanctuary, and to Jews as the Temple Mount.