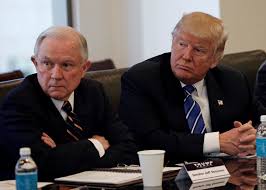 President Trump (R) said on July 20, 2017 that he never would have appointed Attorney General Jeff Sessions (L) had he known Mr. Sessions would recuse himself from overseeing the Russia investigation that has dogged his presidency, calling the decision “very unfair to the president.” Trump fired Sessions the day after midterm elections on Nov 7, 2018
Share:

President Trump said on Wednesday that he never would have appointed Attorney General Jeff Sessions had he known Mr. Sessions would recuse himself from overseeing the Russia investigation that has dogged his presidency, calling the decision “very unfair to the president.”

In a remarkable public break with one of his earliest political supporters, Mr. Trump complained that Mr. Sessions’s decision ultimately led to the appointment of a special counsel that should not have happened. “Sessions should have never recused himself, and if he was going to recuse himself, he should have told me before he took the job and I would have picked somebody else,” Mr. Trump said.

In a wide-ranging interview with The New York Times, the president also accused James B. Comey, the F.B.I. director he fired in May, of trying to leverage a dossier of compromising material to keep his job. Mr. Trump criticized both the acting F.B.I. director who has been filling in since Mr. Comey’s dismissal and the deputy attorney general who recommended it. And he took on Robert S. Mueller III, the special counsel now leading the investigation into Russian meddling in last year’s election.

Mr. Trump said Mr. Mueller was running an office rife with conflicts of interest and warned investigators against delving into matters too far afield from Russia. Mr. Trump never said he would order the Justice Department to fire Mr. Mueller, nor would he outline circumstances under which he might do so. But he left open the possibility as he expressed deep grievance over an investigation that has taken a political toll in the six months since he took office.

Asked if Mr. Mueller’s investigation would cross a red line if it expanded to look at his family’s finances beyond any relationship to Russia, Mr. Trump said, “I would say yes.” He would not say what he would do about it. “I think that’s a violation. Look, this is about Russia.”

While the interview touched on an array of issues, including health care, foreign affairs and politics, the investigation dominated the conversation. He said that as far as he knew, he was not under investigation himself, despite reports that Mr. Mueller is looking at whether the president obstructed justice by firing Mr. Comey.

Describing a newly disclosed informal conversation he had with President Vladimir V. Putin of Russia during a dinner of world leaders in Germany this month, Mr. Trump said they talked for about 15 minutes, mostly about “pleasantries.” But Mr. Trump did say that they talked “about adoption.” Mr. Putin banned American adoptions of Russian children in 2012 after the United States enacted sanctions on Russians accused of human rights abuses, an issue that remains a sore point in relations with Moscow.

Mr. Trump acknowledged that it was “interesting” that adoptions came up since his son, Donald Trump Jr., said that was the topic of a meeting he had with several Russians with ties to the Kremlin during last year’s campaign. Even though emails show that the session had been set up to pass along incriminating information about Hillary Clinton, the president said he did not need such material from Russia about Mrs. Clinton last year because he already had more than enough.

The interview came as the White House was trying to regain momentum after the collapse of health care legislation even while the president’s son, son-in-law and former campaign chairman were being asked to talk with Senate investigators. Relaxed and engaged, the president sat at the Resolute Desk in the Oval Office, with only one aide, Hope Hicks, sitting in on the interview. The session was sandwiched between a White House lunch with Republican senators and an event promoting “Made in America” week.

Over the course of 50 minutes, the often-fiery Mr. Trump demonstrated his more amiable side, joking about holding hands with the president of France and musing about having a military parade down a main avenue in Washington. He took satisfaction that unemployment has fallen and stock markets have risen to record highs on his watch.

At one point, his daughter Ivanka arrived at the doorway with her daughter, Arabella, who ran to her grandfather and gave him a kiss. He greeted the 6-year-old girl as “baby,” then urged her to show the reporters her ability to speak Chinese. She obliged.

But Mr. Trump left little doubt during the interview that the Russia investigation remained a sore point. His pique at Mr. Sessions, in particular, seemed fresh even months after the attorney general’s recusal. Mr. Sessions was the first senator to endorse Mr. Trump’s candidacy and was rewarded with a key cabinet slot, but has been more distant from the president lately.

“Jeff Sessions takes the job, gets into the job, recuses himself, which frankly I think is very unfair to the president,” he added. “How do you take a job and then recuse yourself? If he would have recused himself before the job, I would have said, ‘Thanks, Jeff, but I’m not going to take you.’ It’s extremely unfair — and that’s a mild word — to the president.”

Mr. Trump also faulted Mr. Sessions for his testimony during Senate confirmation hearings when Mr. Sessions said he had not had “communications with the Russians” even though he had met at least twice with Ambassador Sergey I. Kislyak. “Jeff Sessions gave some bad answers,” the president said. “He gave some answers that were simple questions and should have been simple answers, but they weren’t.”

A spokesman for Mr. Sessions declined to comment on Wednesday.

The president added a new allegation against Mr. Comey, whose dismissal has become a central issue for critics who said it amounted to an attempt to obstruct the investigation into Russian meddling in the election and any possible collusion with Mr. Trump’s team.