Analysis of Macron’s invitation to Trump: Keep your enemies closer 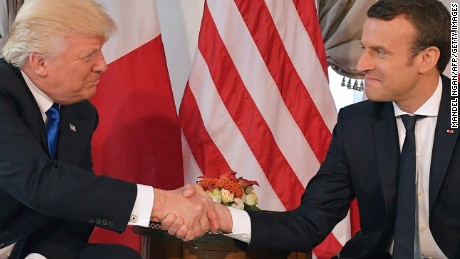 PARIS — This could be the beginning of a beautiful friendship.

If the potential for a productive relationship between President Trump and French President Emmanuel Macron initially seemed a scant possibility, Trump’s whirlwind Bastille Day visit to France suggested that the two may be en route to establishing a partnership of the kind the U.S. president currently shares with few other world leaders, especially in Western Europe.

Despite Trump’s staggering unpopularity in France — not to mention the outrage over Macron’s decision to invite his American counterpart to this country’s signature national holiday — the newly minted French president appeared to make a daring gamble. With the United States increasingly isolated on the global stage, Macron sought to position himself as Trump’s principal interlocutor in a region that has shown the White House little but disdain.

At least for the moment, that role is Macron’s for the taking — and he may succeed in securing it.

In a rare news conference Thursday — in which both presidents took two questions — Trump made no secret of his delight at Macron’s invitation.

“France is America’s first and oldest ally. A lot of people don’t know that,” he said. “It was a long time ago, but we are together. And I think together, perhaps, more so than ever. The relationship is very good.”

Despite the historic “special relationship” between the United States and Britain, Trump has shown little interest in British affairs since his inauguration, further delaying a traditional visit to the country until 2018. And although German Chancellor Angela Merkel recently tried to patch things up with Trump at the Group of 20 summit in Hamburg, she has done little to hide her distaste.

Enter Macron, an outspoken advocate of globalization and an “ever closer” European Union who initially seemed an anti-Trump figure on the world stage — and even a temporary antagonist of the U.S. president.

After Trump essentially supported Macron’s rival, the far-right Marine Le Pen, in this year’s French presidential election, Macron then strong-armed Trump in a six-second handshake when the two men met for the first time in Brussels in May.

The next week, Trump withdrew from the Paris climate agreement, carefully enunciating that he was “elected to represent the citizens of Pittsburgh, not Paris.” Macron responded — in English — in a speech in which he urged people the world over to “Make our planet great again,” a clear play on Trump’s campaign slogan.

The Paris visit, however, seemed to establish the inklings of a working relationship between these two seemingly incompatible figures.

Although Trump has been known to change his mind abruptly, his initial reaction to the Paris visit was markedly positive.

First, there was yet another dramatic handshake, this one suggesting more of a sense of comity instead of animosity. At the end of the Bastille Day military parade, as he was preparing to leave for the airport, Trump forcefully shook Macron’s hand, then patted their clasped hands while shaking that of Macron’s wife, Brigitte, as well.

Then came the tweets.

In a series of posts after his departure, Trump wished Macron “congratulations” on Bastille Day, offered his condolences for the victims of the Nice terrorist attack last year and thanked his host for what he characterized as a worthwhile meeting.

“Great conversations with President Emmanuel Macron and his representatives on trade, military and security,” Trump tweeted.

In France, the jury was out as to Macron’s precise motives in inviting — and embracing — Trump for an impromptu visit this week.

For some, even those in Macron’s inner circle, the principal motivation was a version of the ancient proverb: Keep your friends close, but keep your enemies closer.

“Emmanuel Macron wants to try to prevent the president of the United States being isolated,” Christophe Castaner, a spokesman for Macron, told French reporters this month. “He sometimes makes decisions that we disagree with, on climate change, for example.”

To that end, Macron made no secret of these differences in his joint appearance with Trump on Thursday.

“I very much respect the decision taken by President Trump,” he said at the news conference. “He will work on implementing his campaign promises, and as far as I’m concerned, I remain attached to the Paris accord and will make sure that step by step we can do everything which is in the accord.”

But as Castaner put it: “We can do two things. Either you can say, ‘We’re not speaking, because you haven’t been nice,’ or we can reach out to him to keep him in the circle.”

For others, inviting Trump was a means for Macron to bolster the international image of France — notably before his presidency is put to its first major domestic test this fall, when the French president will attempt to shove a controversial labor reform through Parliament.

Breaking news from around the world.

In late May, Macron invited Russian President Vladimir Putin, whom he confronted in a bilateral news conference about the activities of state-owned Russian media.

With this visit, analysts say, he sought to do the same.

“It makes Macron the man who invites the powerful people of the world,” said François Heisbourg, a French national security expert who advised the Macron campaign on terrorism. “It instantaneously reset the image of France as a player.”

“The signal was that France is back again — now, whether that’s lasting, only time will tell.”