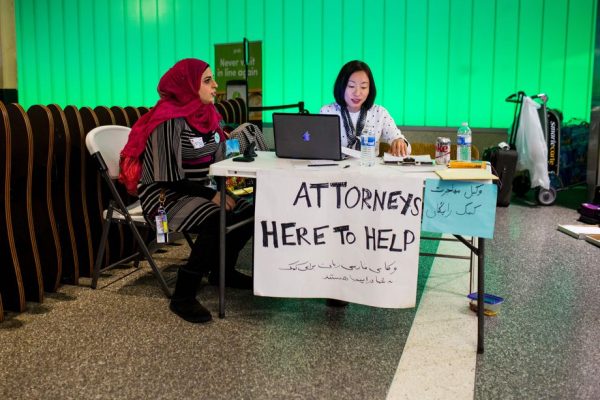 A volunteer attorney and volunteer translator stationed at Los Angeles International Airport in February, when the first version of President Trump’s travel ban was in effect. Kyle Grillot/AFP via Getty
Share:

The Trump administration provided details of its revised travel ban on refugees and on visitors from six majority Muslim countries hours before it’s to take effect, seeking to ensure there’s no repeat of the chaotic scenes at airports when the order was initially imposed in January.

The restrictions will go into effect as of 8 p.m. eastern time on Thursday, administration officials confirmed on a conference call with reporters as they predicted an orderly rollout. Unlike the last time, when travelers arriving in the U.S. were turned back at airports, the officials, who spoke on condition of anonymity, emphasized that those already holding a valid visa will be let in.

In an effort to comply with a Supreme Court ruling this week that those with “bona fide” connections in the U.S. must be exempted from the travel ban, the fine points have been spelled out in a cable distributed to American embassies worldwide.

While certain close family members of people in the U.S. would be exempt from the ban on entry — including spouses, children, and siblings — grandparents, aunts and uncles wouldn’t. Travelers with business or professional ties from the affected countries also are exempted if they can show a relationship that’s formal and documented, and not based on an intent to evade the ban.

The Supreme Court’s decision revived President Donald Trump’s 90-day ban on people entering the U.S. from six predominantly Muslim nations: Iran, Libya, Somalia, Sudan, Syria and Yemen. It also suspends all refugee admissions for 120 days. The president has cited the risk of terrorists slipping into the U.S., while critics have said the ban discriminates against Muslims. 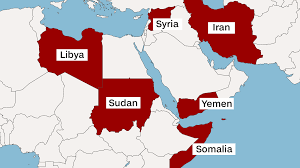 After months of delays to Trump’s initial travel ban and a revised version, both of which were struck down by the courts, the 13-page Supreme Court ruling allows the government to deny entry to people from the six nations who don’t have existing U.S. links. Determining who must be exempted for having the “bona fide” connections mandated by the court has tied up officials from the Department of Homeland Security, the State Department and the Justice Department since the ruling was issued.

The State Department’s guidance, which will be posted on its website, grants significant discretion to consular officers who will approve visas in U.S. embassies around the world. For example, the guidance sent to embassies says that consular officers can decide that granting a visa to an applicant would be in the U.S.’s national interest .

Administration officials are seeking to avoid any repeat of the protests that broke out in cities and airports around the country after the initial order was imposed with no advance notice in January. A subsequent order, which was the focus of the Supreme Court ruling, eased some of its most controversial provisions but left the central elements in place. In October, the Supreme Court will review an administration appeal of two federal appeals courts’ decision to block the ban.

Nongovernmental organizations and refugee advocates have struggled to discern how many people will actually be affected by the new restrictions. The U.S. has admitted about 50,000 refugees so far this year, and it’s impossible to say how many would have been barred under the rules, according to one administration official on the call. The official said about half of all refugees have family ties to people in the U.S.

Air carriers affected by the new measures said they’ll take the presentation of legitimate paperwork for entering the U.S. as indicating that passengers meet the requirements. Dubai-based Emirates, which ranks as the world’s biggest long-haul airline and has flights from Iran and Sudan among the affected countries, said that its U.S. services are operating as usual.

“All passengers must possess the appropriate travel documents, including a valid U.S. entry visa, in order to travel,” it said. “Emirates remains guided by the U.S. Customs and Border Protection on this matter.”

Etihad Airways PJSC, whose Abu Dhabi base is also a hub for the region, is operating as normal and will allow people with the correct documents to fly.

Advocacy groups, former officials who work on refugee issues, and nongovernmental organizations that relocate them to the U.S. contend that the majority of refugees coming to the U.S. already have family ties and that the existing process of clearing them to live in the U.S. is extremely rigorous.

The Trump administration has countered that refugees may pose a security risk. In addition, Secretary of State Rex Tillerson has said the U.S. wants to keep refugees that have fled to places such as Jordan and Turkey within their regions so they can return home when it’s safe to do so. He said other countries should take more of the burden.

“Our message is we’re leaning in and asking all of you, all of you to step up and do more,” Tillerson testified at a Senate hearing earlier this month.