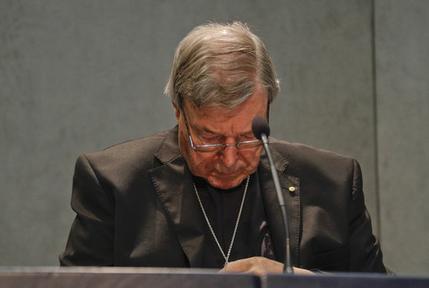 VATICAN CITY (AP) — Pope Francis suffered a major blow Thursday when his top financial adviser, Cardinal George Pell, was charged in his native Australia with multiple counts of sexual assault from years ago, bringing a criminal case in the long-running abuse scandal inside the frescoed walls of the Vatican for the first time.

The 76-year-old Pell – the highest-ranking Vatican official ever implicated in the scandal – forcefully denied the accusations and took an immediate leave of absence as Vatican finance czar to return to Australia to defend himself.

“The whole idea of sexual abuse is abhorrent to me,” Pell told reporters in the Vatican press office. “News of these charges strengthens my resolve, and court proceedings now offer me an opportunity to clear my name.”

The pope thanked him for his “honest” work and collaboration, and set about trying to ensure that the financial reforms he had entrusted to Pell would continue in his absence.

But the case creates a thorny image problem for the pope, who has already suffered several credibility setbacks in his promised “zero tolerance” policy about sex abuse in the worldwide scandal.

In 2014, Francis won cautious praise from victims’ advocacy groups when he created a commission of outside experts to advise him and the broader church about the “best practices” to fight abuse and protect children.

But the commission has lost much of its credibility after its two members who were survivors of abuse left in frustration. Francis also scrapped the commission’s signature proposal – a tribunal to hear cases of bishops who covered up for abuse – after Vatican officials objected.

That one of his top advisers now stands charged with abuse himself increases the pressure on Francis to get the abuse commission back on track and press ahead with the financial reforms that he was elected pope to enact.

“It’s a big crisis for Pope Francis, because Cardinal Pell was the man he called from Sydney to Rome to reform the Vatican finances,” noted Christopher Lamb, correspondent for the British Catholic magazine, The Tablet. “Pope Francis has said ‘zero tolerance’ for abusers, that he was going to sack bishops who cover up, but at the same time there have been number of cases where he’s been accused of having not taken strong enough action.”

Notably, Francis didn’t force Pell to resign his post. He has said he would wait for Australian justice to run its course before making a judgment himself.

The developments also posed a new obstacle for Francis as he tries to overhaul the Vatican bureaucracy and bring its finances up to international accounting and transparency standards.

If the case drags on, he will be pressed to ensure that the economy secretariat can work effectively. Reforms already were strained by Pell’s repeated clashes with the Italian-dominated bureaucracy, mired by delays, resistance and the complexity of bringing order to the Vatican’s financial fiefdoms.

Just last week, one of Pell’s top allies, the Vatican auditor general, resigned without explanation two years into a five-year term, raising questions about whether the reform effort was doomed.

The charges against Pell were announced in Melbourne by Victoria state Police Deputy Commissioner Shane Patton, who said the cardinal – Australia’s senior Catholic – was ordered to appear in court July 18 to face multiple counts of “historical sexual assault offenses” – meaning offenses that generally occurred some time ago. Patton said there are multiple complainants against Pell, but he gave no other details.

Vatican spokesman Greg Burke said the Holy See had learned with “regret” of the charges and that the work of Pell’s office would continue in his absence, albeit only its “ordinary” affairs.

In a statement he read to reporters while sitting next to Pell, Burke said the Vatican respected Australia’s justice system but recalled that the cardinal had “openly and repeatedly condemned as immoral and intolerable” acts of sexual abuse against minors.

He noted Pell’s cooperation with Australia’s Royal Commission investigation of sex abuse and that as a bishop in Australia, he worked to protect children and compensate victims.

Pell said he intends to return to Rome eventually to resume his work as prefect of the Vatican’s economy ministry.

The Vatican said Pell would not participate in any public liturgical events during his leave. The charges came while many of the world’s cardinals were in Rome for a ceremony a day earlier to elevate five new cardinals, and Pell did not participate in a Mass in St. Peter’s Square on Thursday.

For years, Pell has faced allegations that he mishandled cases of clergy abuse as archbishop of Melbourne and, later, Sydney. But more recently, Pell himself became the focus of a clergy sex abuse investigation, with Victoria detectives flying to the Vatican to interview him last year.

It is unclear what allegations the charges announced Thursday relate to, but two men, now in their 40s, have said that Pell touched them inappropriately at a swimming pool in the late 1970s, when Pell was a senior priest in Melbourne.

Pell’s actions as archbishop came under scrutiny in recent years by a government-authorized investigation into how the Catholic Church and other institutions have responded to the sexual abuse of children. The Royal Commission found shocking levels of abuse in Australia’s Catholic Church, revealing that 7 percent of priests were accused of sexually abusing children in the past several decades.

Last year, Pell testified to the commission that the church had made “enormous mistakes” in allowing thousands of children to be raped and molested by priests. He conceded that he, too, had erred by often believing the priests over victims who alleged abuse. He vowed to help end a rash of suicides that has plagued church abuse victims in his hometown of Ballarat.

But he also became something of a scapegoat in Australia for all that went wrong with how the church handled the scandal.

Marie Collins, an Irish survivor of abuse who resigned from the pope’s advisory commission in March, said Pell never should have been promoted to his Vatican job, given how he mishandled abuse cases in Australia. It was, she said in a statement, “a slap in the face to all those he had let down so badly, not only victims but Catholic people who have spent years now hearing assurance from the Catholic Church that it is taking the issue seriously.”

Proving the charges may be difficult. The prosecution must prove the sex offenses occurred beyond a reasonable doubt, which can be difficult when so much time has passed, said Lisa Flynn, national manager of Shine Lawyers’ abuse law practice in Australia.

It was unclear if Pell would face a church trial stemming from the accusations. The Vatican has clear guidelines about initiating a canonical investigation if there is a semblance of truth to sex abuse accusations against a cleric. In the case of a cardinal, it would fall to Francis himself to judge. Penalties for a guilty verdict in a church trial include defrocking.

Sydney Archbishop Anthony Fisher stood by Pell, calling him “a man of integrity in his dealings with others, a man of faith and high ideals, a thoroughly decent man.”

He added that the archdiocese wouldn’t be paying Pell’s legal bills.

Anne Barrett Doyle of BishopAccountability.org, an online archive of clerical sex abuse documents, said she was surprised by the charges “simply because of their boldness.”

“While Pell undeniably is the poster boy for the Australian church’s wrongdoing, false allegations are relatively rare,” she said in an email.