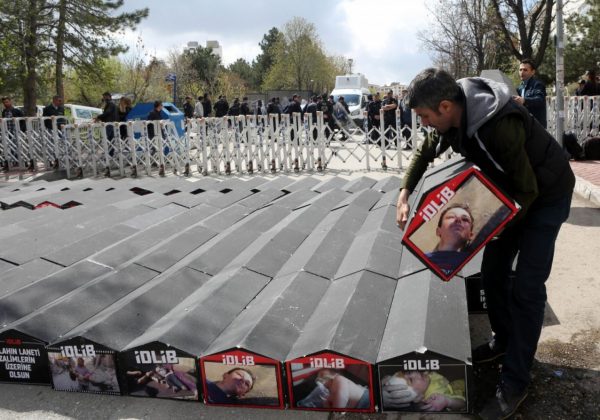 A man carries one of the symbolic coffins with pictures of Syrian victims and inscriptions which translates as “killer Assad” and “killer Putin” set up during a protest against Russia for its alleged role in a chemical attack in the Syrian province of Idlib, on April 7 in Ankara. (Adem Altan/AFP/Getty Images)
Share:

The White House issued an ominous warning to Syrian President Bashar al-Assad on Monday night, pledging that his regime would pay a “heavy price” if it carried out another chemical attack this year.

In a statement, White House press secretary Sean Spicer said that the United States had detected evidence of preparations for a chemical attack, similar to the preparations that occurred before an attack in April.

“As we have previously stated, the United States is in Syria to eliminate the Islamic State of Iraq and Syria,” he continued. “If, however, Mr. Assad conducts another mass murder attack using chemical weapons, he and his military will pay a heavy price.”

Following the April attack, President Trump ordered an air strike against the Assad-controlled air field where the attack was believed to have been carried out.

At the time, Trump said that Assad’s use of chemical weapons against innocent women and children made action inevitable.

“When you kill innocent children, innocent babies, babies, little babies, with a chemical gas that is so lethal — people were shocked to hear what gas it was,” Trump said after the attack. “That crosses many, many lines, beyond a red line, many, many lines.”

Following Spicer’s statement on Monday night, Nikki Haley, the U.S. Ambassador to the United Nations said Assad and its allies would be squarely blamed if such an attack occurred.

“Any further attacks done to the people of Syria will be blamed on Assad, but also on Russia & Iran who support him killing his own people,” Haley wrote.

The U.S. military maintains a variety of weapons in the region that could be used in the event of another strike, including manned and unmanned aircraft in several Middle Eastern countries. But the most likely scenario is probably a strike using naval assets, which can be launched with fewer diplomatic issues than using bases in allied countries such as Turkey or the United Arab Emirates.

The Navy launched Tomahawk missiles at a Syrian military airfield April 6 in response to a previous alleged chemical weapons attack, using two guided-missile destroyers in the eastern Mediterranean Sea, the USS Ross and USS Porter, to do so.

A point of contention for the Pentagon after the last strike was the Syrian regime’s alleged use of a nerve agent, like sarin. It is far deadlier than some other chemicals that U.S. military and intelligence officials say that the regime has used, such as chlorine.