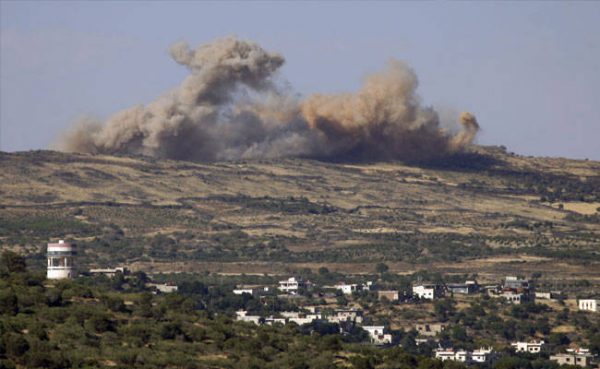 This picture shows smoke billowing from the Syrian side of the Golan on June 24, 2017.
Share:
Israel launched strikes on Syrian military positions Saturday, close to the two countries’ disputed border in the Golan Heights, according to the Israel Defense Forces (IDF).

The action was a response to what the IDF said were more than 10 projectiles fired into Israel from inside Syria. The IDF described the projectile fire as “errant,” blaming it on internal fighting.

Earlier today, in response to over 10 projectiles fired at Israel, an IAF aircraft targeted 3 positions belonging to the Syrian regime pic.twitter.com/JWOVVXG1dc

Israeli aircraft targeted three positions from which the projectiles were fired, the IDF said. The strikes included hits on two tanks belonging to the Syrian regime.

Syrian state-run news agency SANA reported several people were killed in the Israeli strikes. SANA said fighting in the area is between the Syrian regime and the al Nusra Front, a militant Syrian rebel group. No one is reported to have been wounded as a result of the projectile fire.

Israel lodged an official protest with the United Nations’ Disengagement Observer Force, which monitors relations between Israel and Syria in the Golan Heights, over what it called an unacceptable breach of Israeli sovereignty.
CNN