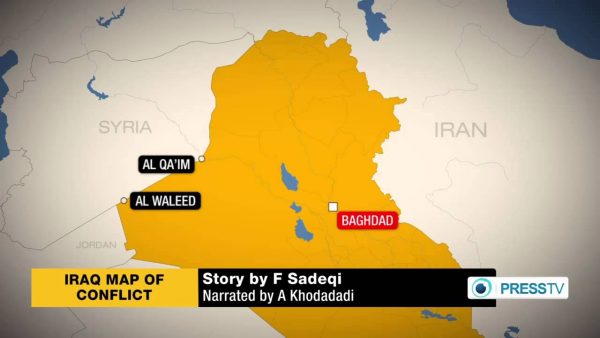 Beirut, Lebanon- Syrian troops and allied militias met up with Iraqi forces at one crossing point along their shared border Sunday for the first time in years, in a step described as a major achievement by the Syrian military in their fight against the Islamic State group.

The development reported by pro-government media Sunday comes a day after Iraqi forces captured a border crossing point with Syria, al-Waleed, from the IS militants. It was not immediately clear if the Syrian forces reached a new point along their border with Iraq or whether it was the Iraqi forces that had moved northeast of their newly captured point.

The U.S.-led coalition said it was aware of the Iraqi forces’ maneuvers along the border, which highlight Baghdad’s resolve to fight IS. The maneuvers have no impact on the U.S. presence nearby, a coalition colonel said.

The Britain-based opposition war monitor group Syrian Observatory for Human Rights said the Iraqi forces had moved northeast of al-Waleed meeting up with pro-Syrian troops for the first time since 2015. The borders had been controlled by IS since.

“This is the sign of the cooperation between the brotherly Iraqi and Syrian military leadership to secure the shared borders,” the unnamed general told the pro-state TV. The general was interviewed in the desert, in an area purported to be across from where the Iraqi forces are based. Syrian officials were recently in Iraq meeting with defense officials there.

The general said the meeting point for Iraqi and Syrian forces is northeast of Tanf, an area where U.S. troops and Syrian opposition fighters are based, and where they were recently encircled by the Iranian-sponsored pro-Syrian forces.

U.S. Col. Joe Scrocca, the coalition’s public affairs director, said the decisions of the Iraqi security forces are “theirs alone,” but that they advise the U.S.-led coalition of their operations.

“The Iraq Security Force operation at the al-Waleed crossing further demonstrates their resolve to defeat (IS) throughout all of Iraq,” Scrocca said in an email to the Associated Press. “This operation has no bearing on Coalition partner training operations at At Tanf.”

The head of the Observatory, Rami Abdurrahman, said the link between Iraqi and Syrian forces will allow Iraqi fighters, including pro-Iran militias, to move inside Syria, joining the Syrian government’s campaign against IS strongholds in eastern Syria, Deir el-Zour. Syrian troops have been advancing against IS positions in the desert for weeks.

The Syrian general told the pro-state TV channel that the new meeting point is only 20 kilometers (12 miles) from al-Mayadeen, an IS stronghold where the group has recently relocated much of its leadership.

In recent months the militants have been coming under increasing pressure in Iraq and Syria where they have lost vast parts of the land they declared as a caliphate in Syria and Iraq in June 2014.

Later Sunday, Syria military’s accused the U.S.-led coalition of downing one of its fighter jets in southern Raqqa on a mission against IS militants. The military said the plane crashed and the pilot is missing. Syrian troops had said earlier they were pushing their way into the Rasafa area in southern rural Raqqa.

The Observatory said allied government troops had reached the outskirts of Rasafa Sunday. The area borders the operating battlefield of the U.S.-backed Kurdish forces fighting Islamic State militants. The Observatory said the fate of the plane and the pilot remains unknown.

Also on Sunday, aid groups said a convoy delivering aid to a besieged opposition area outside Syria’s capital has come under attack, seriously wounding a driver of the Syrian Arab Red Crescent and thwarting the first such mission to the area in eight months.

The 37-truck convoy, jointly organized by the International Committee of the Red Cross, the Syrian Arab Red Crescent and the United Nations, was to deliver food and medicine to 11,000 people in the town of East Harasta.

An aid worker and a local council in east Harasta said the delivery had already been aborted before the convoy came under attack. The aid worker spoke on condition of anonymity because of regulations against speaking publicly to the media.

In a post on its Facebook page, the Local Council of Harasta said that after the convoy arrived at the town’s entrance, government officials said the necessary tools to remove sand berms were not available. The local council said the convoy was forced to turn back before coming under fire from a sniper, which it blamed on government troops.

There was no immediate word from the government.

Some 600,000 Syrians live under siege in different areas, mostly trapped by government forces, according to the U.N.