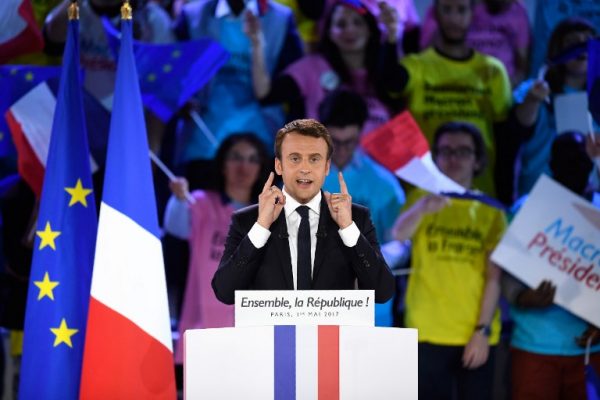 French presidential election candidate for the En Marche ! movement, Emmanuel Macron delivers a speech during a campaign rally on May 1, 2017 at the Paris Event Center in Paris. / AFP PHOTO / Eric FEFERBERG
Share:
President Emmanuel Macron’s Republique en Marche (REM) party were set to gain a massive majority in the French parliament, according to initial estimations on Sunday evening. However record abstention rate in the second round of the elections meant Macron’s victory was slightly tarnished.
The initial results for the second round of France’s parliamentary elections suggest Macron’s REM party and its centrist allies Modem will gain something between 395 and 420 seats in the 577-seat National Assembly.

The winning margin is lower than forecast during the week when some estimates suggested Macron’s Republic on the Move (REM) and its allies would secure as many as 470 seats.

Nevertheless that will be little consolation to his opponents as the result, if confirmed, would give 39-year-old Macron one of France’s biggest post-war majorities, strengthening his hand in implementing his business-friendly, pro-EU programme.

Reacting to the results Macron’s Prime Minister Edouard Philippe said: “By a large majority the French people have chosen hope over anger, optimism over pessimism, confidence over decline.”

Philippe acknowledged however that “abstention is never good news for democracy”.

He said the government interpreted the low turn out as an “obligation to succeed”.

However, a long way behind in second place was the conservative Republicans party, who are set to win anything between 97 and 117 seats, according to initial results.

The Republicans hung on to between 97 and 130 seats, down from over 200 in the last parliament, and remain the main opposition party.

The party had enough seats to “defend its convictions”, said the party’s leader for the elections, Francois Baroin, calling on Macron to heed the record-low turnout, which he said sent “a message”.

“The task he faces is immense,” he added.

The Socialist party and its leftist allies were forecast to win between 27 and 35 seats, a result that will be considered a disaster for the party that swept to power in 2012.

Jean-Luc Mélénchon’s France Insoumise (France unbowed) were set to win between 12 and 17 seats. Mélénchon himself was expected to have been elected to the parliament after winning the battle for the seat in Marseille.

Le Pen herself was one of those elected after results said she won the seat she was fighting for in northern France. Her party and National Front party deputy Louis Aliot also announced victory in the constituency he was standing in south western France.

These initial predictions will change throughout the night as the results comes in.

However many will say Macron’s crushing victory is somewhat undermined by the record low turn out. The abstention rate was expected to hit 58 percent, giving his critics grounds to claim he has no groundswell of support.

The Assembly is set to be transformed with a new generation of lawmakers — younger, more ethnically diverse and with far more women than the outgoing parliament.

The scale of the change is forecast to be so large that some observers have compared the overhaul to 1958, the start of the present presidential system, or even the post-war rebirth of French democracy in 1945.