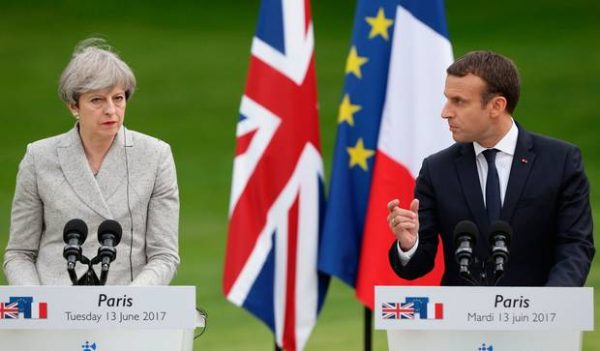 French President Emmanuel Macron said on Tuesday that the door of the European Union remains open to the United Kingdom as long as negotiations for Britain to leave the EU are not concluded.

Macron said in a joint news conference with UK Prime Minister Theresa May in the presidential palace’s garden that he wished Brexit negotiations should start as soon as possible, led by the European Commission.

“The door of course is still open as long as Brexit negotiations have not been concluded, but a sovereign decision to leave the EU has been taken and I respect that decision,” Macron said.

But he stressed too that he respected the sovereign decision of the British people to leave the EU in their referendum a year ago, adding that the start of talks was an important milestone.

“We need to be clear and organised and once it (the Brexit process) has started we need to be collectively clear that it’s more difficult to reverse course,” he said at the Elysee palace.

“If they wanted to change their decision, of course they would find open doors, but I think it’s not very likely,” Schaeuble told Bloomberg Television.

May repeated her plans to stick to her timetable of starting discussions next week despite ongoing negotiations to form a government.

She was also asked if the loss of her parliamentary majority in a bungled snap election last week would alter her decision to withdraw Britain from the EU single market and customs union, a so-called “hard Brexit”.

May said the process would lead to “an arrangement for Brexit which will be the interests of the United Kingdom and the remaining 27 members of the EU.”

After the talks, May and Macron also announced a joint action plan to tackle online extremism which aims to increase the pressure on internet giants and social media companies to tackle terror propaganda and hate speech.

It includes exploring the creation of new laws that would impose penalties on internet companies if they failed to act.

The two leaders were meeting in Paris for a working dinner before together attending a France vs England friendly soccer match at the Stade de France stadium in Paris.