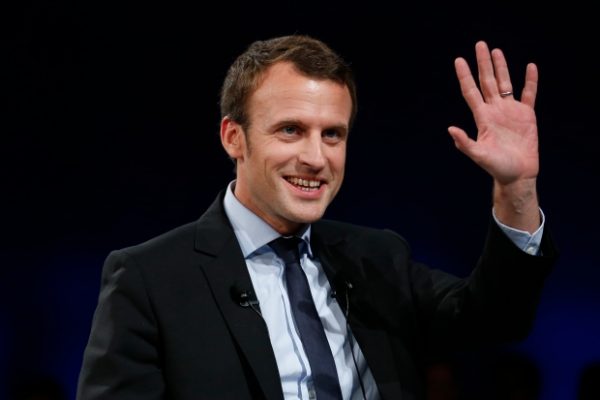 Based on the first-round results, candidates from Macron’s LREM, a political party that barely existed one year ago, were projected to take between 415 and 445 seats in the 577-seat National Assembly next week. It would represent the largest parliamentary majority for a single party in France since the end of World War II.

The LREM party won 32.32 percent of all votes, according to official final results published by the French Interior Ministry, in an election that was also marked by a record-high abstention of 51.29 percent. The mainstream conservative Les Républicains party finished the night in second place with 21.56 percent support. They were projected to win between 70 and 110 seats in the next Assembly according to a projection by Ipsos for FRANCE 24.

Les Républicains leaders, who only weeks ago felt confident about securing a majority in parliament, acknowledged “disappointing” results. Other established political camps, left angling for what appeared would be a paltry number of seats, also had little to celebrate.

Despite half of French voters having chosen not to cast a ballot, Prime Minister Edouard Philippe said they had delivered an “unambiguous” message on Sunday. “Millions of you have confirmed your attachment to the president of the Republic’s project of renewal, unification and re-conquest,” Philippe declared in a statement. 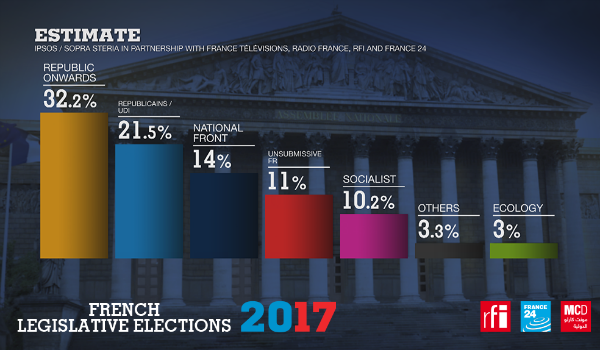 Voters will return to the ballot box for the second round of the legislative poll on June 18, with public opinion experts expecting participation to improve slightly.

Participation in French parliamentary elections has been in free fall over the past three decades. The year 1978 saw the highest participation in a first-round legislative vote, with 83.3 percent of voters casting a ballot. The lowest turnout – until now – was in 2012, when only 57.2 percent of voters participated.
Little improvement for far right

Far-right leader Marine Le Pen put on a brave face in front of the cameras on election night and trumpeted her own first-place score in the northern constituency she is vying to represent. But her National Front (FN) party was staring at yet another defeat.

She blamed the record abstention on the two-stage voting system that has kept her anti-immigrant, Europhobe group on the political sidelines for years, urging supporters to take part in the second round. “A strong turnout should give us victory in several districts and these victories are essential,” Le Pen pleaded from FN stronghold of Hénin-Beaumont.

The far-right leader has run for a parliamentary seat in the constituency twice in the past, both times unsuccessfully, and there was no guarantee she would finally taste victory next weekend. Support for the FN dropped from around 21 percent nationwide during the presidential race, to just 13.2 percent in the legislative contest.

Ipsos predicted the far-right camp would send between one and five lawmakers to the National Assembly, where it currently counts two members, far from the 15 minimum seats it needs to form its own parliamentary group. Those final results would also represent small dividends after an expensive election cycle that has reportedly left Le Pen “exhausted” and exposed rifts within the party.

The ruling Socialist Party (PS), red-faced after finishing a distant fifth in the presidential contest in April, appeared to lose its fight to stay relevant. The party of former president François Hollande and its allies managed to take just 9.51 percent of Sunday’s votes and saw several former ministers ejected from constituencies they once considered airtight.

The Socialists occupy around 280 seats in the outgoing Assembly, and may save as few as 20 of them when the parliamentary battle is over. Ipsos said candidates from the Socialist Party, combined with allies from the Green party, would win only between 20 and 30 seats.

The meltdown was evident on election night as top Socialists were forced to concede defeat, sometimes in constituencies they served for decades. Party chief Jean-Christophe Cambadélis, who has represented northern Paris since 1997, failed to qualify for the second round.

The results “marked an unprecedented retreat of the left as a whole and the PS in particular,” Cambadélis admitted meekly in a speech from party headquarters.

Another stinging defeat was inflicted on Benoit Hamon, the Socialist Party’s unsuccessful candidate in the presidential race. Other prominent Socialists who were dumped out in the first round included former interior minister Matthias Fekl and former culture minister Aurélie Filipetti.