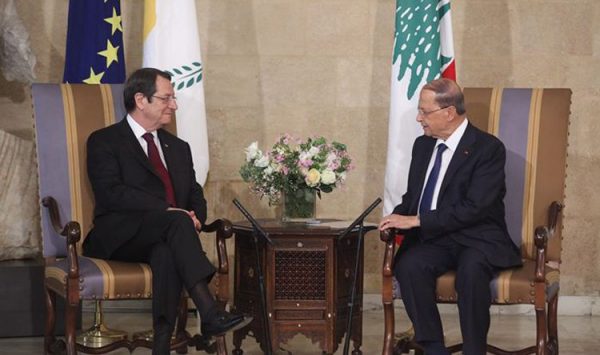 “I encourage the governments of the two countries to raise the level of cooperation in the fields of oil and gas,” Aoun said in a joint news conference with Cypriot president Nicos Anastasiades.

Aoun hoped that the talks would serve “the best interest of both countries.”

“What’s happened in the region has increased the importance of us working together,” Anastasiades said.

“I assure you … Cyprus will assist Lebanon in taking on these challenges through bilateral relations and through the EU.”

The Lebanese government estimates that around 1.5 million Syrian refugees live in unofficial camps around the country in deteriorating economic conditions .

Aid to the Lebanese army

Aoun praised the recent aid offered by Cyprus to the Lebanese Army.

During an official trip to Cyprus, Sarraf and Cypriot officials discussed enhancing bilateral ties and military cooperation between the two countries.

The defense minister and his Cypriot counterpart Demetris Eliades also signed an annual cooperation agreement between the two countries’ militaries.

The aid to the Army comes as the military continues to target the militants along Lebanon’s northeastern border with Syria.

The Army has been pounding militant hideouts in Arsal and Ras Baalbeck of ISIS and the al Qaeda linked Jabhat Fatah al-Sham, (formerly the Nusra Front) , on an almost daily basis.

“There’s a main goal, which is to keep Lebanon’s security a top priority on the agenda of European Union countries,” Aoun said.

Lebanon approved earlier this year two measures allowing it to auction its first offshore oil and natural gas rights, ending three years of delays that kept the tiny country from joining a regional race to tap energy wealth in the eastern Mediterranean.

Hariri’s government passed the two decrees . The decrees demarcate energy blocks, establish production-sharing contracts and specify tender protocols. They take immediate effect with no need for additional approval.
Lebanon has lagged behind neighboring Israel, Cyprus and Egypt in developing oil and gas deposits that may lie beneath its share of the Mediterranean Sea. Seismic surveys show the country could hold at least 96 trillion cubic feet of gas and 850 MMbbl of oil, Bassil, who was then the country’s energy minister, said in a December 2013 interview. Exxon Mobil Corp. and Eni SpA are among companies qualified to bid to explore off the country’s coast.

The maritime border has been a hot button topic for decades, as the two countries are technically still in a state of war. UN and US brokered talks over the years have failed to settle on a definite border.

The renewed dispute, however, caused outrage on both sides. Israeli media accused Lebanon of disrupting the status quo by putting out tenders for the seabed exploration work earlier this year.

In turn, the Speaker of the Lebanese parliament Nabih Berri said last March 25th that the Israeli bill claiming the 860 square kilometre zone was a “new attack on Lebanon’s sovereignty.”

“The recent decision taken by Israel on the territorial waters is equal to a declaration of war on Lebanon,” he told Lebanese media.

“We have outlined and informed the United Nations with our borders according to the international treaties and therefore we have sovereign right to benefit from our wealth, Lebanese Minister of Energy and Water Cesar Abou Khalil said earlier this week.

“We will not back down from this right no matter what the threats are.“