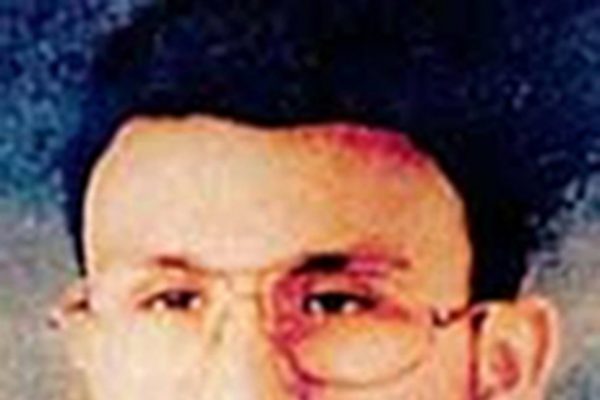 This file photo provided by U.S. Central Command, shows Abu Zubaydah, date and location unknown. The European Center for Constitutional and Human Rights, a non-profit group, is handing a legal submission to German federal prosecutors seeking an arrest warrant for CIA deputy director Gina Haspel over claims she oversaw the torture of detainees like Abu Zubaydah. (U.S. Central Command via AP) THE ASSOCIATED PRESS
Share:
BERLIN (AP) — A civil rights group is asking German authorities to issue an arrest warrant for the recently appointed deputy director of the CIA over claims she oversaw the torture of terrorism suspects 15 years ago.

The nonprofit European Center for Constitutional and Human Rights submitted a legal brief to German federal prosecutors Tuesday, alleging that Gina Haspel allowed the waterboarding of prisoners at a secret U.S. detention center in Thailand.

The prosecutor’s office confirmed Wednesday the complaint had been received and was being reviewed. Similar complaints against senior U.S. officials in the past haven’t resulted in arrest warrants.

Advocates describe waterboarding as a form of “enhanced interrogation.” Critics say it amounts to torture, because prisoners are made to feel they are drowning.

Haspel was the first female career CIA officer selected to be deputy director in February .

The submission by the European Center for Constitutional and Human Rights — seen by The Associated Press — centers mainly on the case of Abu Zubaydah, a Saudi citizen and senior al-Qaeda member who was among scores of Islamic extremists detained worldwide in the wake of the Sept. 11, 2001, attacks.

Drawing on media report and congressional testimony, attorneys for the European Center for Constitutional and Human Rights allege that Zubaydah was waterboarded 83 times in August 2002, while Haspel was in charge of a detention facility in Thailand known as Cat’s Eye base or Detention Site Green.

The submission identifies two CIA contractors, psychologists James Mitchell and Bruce Jessen, as the only people authorized to have contact with Zubaydah during that time and claims they were answerable to Haspel.

The American Civil Liberties Union is currently suing Mitchell and Jessen on behalf of three men who say they were tortured using techniques the psychologists designed. A U.S. Senate investigation in 2014 found their interrogation techniques produced no useful intelligence in the so-called war on terror, but some former intelligence officials say the techniques have produced valuable intelligence.

“For the purposes of determining criminal liability, what is most relevant is the fact that as head of the secret prison in Thailand, Gina Haspel followed each day of Abu Zubaydah’s torture from Aug. 4 to 23, 2002, and she alone had the responsibility to end this torture but failed to do so,” the submission to German prosecutors states. It also cites the case of Abd al Rahim al-Nashiri, the alleged mastermind of the USS Cole bombing in 2000, who was waterboarded at Cat’s Eye base in November 2002.

Both men are now held at the U.S. detention center in Guantanamo Bay, Cuba. In a separate legal proceeding, Europe’s top human rights court ruled in 2014 that Poland had violated the rights of Zubaydah and al-Nashiri by allowing the CIA to secretly imprison them on Polish soil from 2002-2003 and facilitate conditions under which they were tortured.

On Wednesday, the human rights group Reprieve announced that attorneys for Zubaydah filed a lawsuit in a U.S. court, seeking to compel Mitchell and Jessen to provide information to Polish officials who are investigating the former CIA black site in Poland.

The lawsuit, filed late last month in federal court in Washington state, says Mitchell and Jessen have information relevant to the investigation being carried out by the Organized Crimes Division of the Regional Public Prosecutor’s Office in Krakow, Poland. The division is investigating whether Polish officials facilitated the existence or operation of the CIA black site, according to the lawsuit.

Henry Schuelke, an attorney who represents Mitchell and Jessen, declined to comment.

U.S. Justice Department officials filed a brief with the court saying “the proposed subpoenas and categories of information sought in this action raise important and complex questions regarding the United States’ national security and foreign policy interests,” and that consequently it could get involved in the case.

The ruling by the European Court of Human Rights marked the first time any court has passed judgment on the rendition program launched by U.S. President George W. Bush after 9/11.

Tuesday’s submission naming Haspel is the first in Germany against a high-ranking official still in service with the CIA. The agency declined to comment on the German group’s legal efforts to have Haspel arrested.

A spokeswoman for Germany’s federal prosecutor’s office said a preliminary investigation into the torture allegations was opened in late 2014, following the partial release of the U.S. Senate report.

“We are grateful for all information that sheds light on the allegations,” Frauke Koehler told The Associated Press, adding that the latest evidence would be reviewed as a matter of course.

While German prosecutors can investigate serious crimes committed outside the country, there has to be a link of some kind to Germany — such as the victim or the suspect being in the country — for them to open a formal criminal probe.

The only case with a clear link to Germany that’s been prosecuted so far is that of Khaled el-Masri, a German citizen of Lebanese descent, who said he was tortured at a CIA-run prison in Afghanistan.

The group argues in the current suit that the renditions in question are part of the broader U.S. program with multiple links to Germany.

Munich prosecutors issued arrest warrants in 2007 for 13 CIA agents involved in the operation , but the German government has refused to seek their extradition.