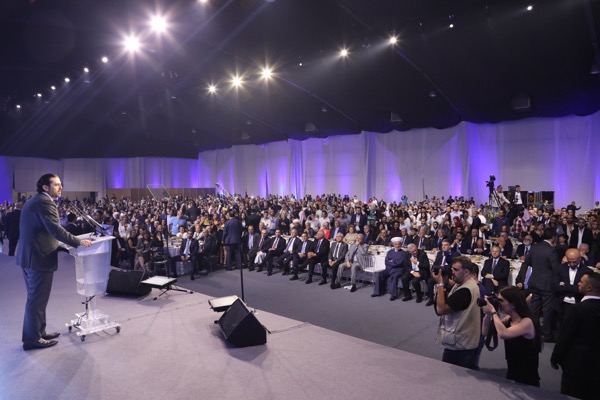 Lebanon Prime Minister, Saad Hariri,  stressed on Tuesday that the sons of Beirut were the guardians of coexistence, vowing to protect the capital’s civilized face.

He said that in a  speech delivered during the iftar that was held  by the Future Movement at  BIEL .

“Beirut the capital is precious to the hearts of all the Lebanese and is the symbol of Lebanon’s message of coexistence between Muslims and Christians,” Hariri said

“You, the people of Beirut from all backgrounds are the guardians of this natural role. You made sacrifices to preserve Beirut as the beacon of knowledge, freedom and steadfastness in the Arab world. Beirut was ravaged by waves of chaos and wars, and 35 years ago, on June 6, 1982, Israel invaded Lebanon and the first thing it did was to bomb and destroy the sports city in Beirut and the last thing it did was to occupy Beirut,” he said, according to a statement issued by his press office.

“Israel thought  that bringing Beirut to its knees was the only way to bring Lebanon to its knees. But Beirut did not kneel. The invaders left and Beirut was not defeated. Beirut suffered from the practices of the Lebanese and Palestinian militias, from the military domination of the Assad regime and the security martial law that was imposed by force on the Lebanese,” he related.

“But it always stood up after each suffering, its head raised and victorious, thanks to the will of its people and those who defended its role and dignity,” he continued.

“When Martyr Prime Minister Rafic Hariri decided to wipe the residues of civil war from Beirut and the ruins from the heart of the capital, he knew that peace in Lebanon cannot be achieved if Beirut remains a hostage to destruction and militias. Rafic Hariri brought back life to the heart of Beirut that was destroyed by war and turned it into a jewel that several neighboring countries are trying to copy. But unfortunately, there are people in Lebanon who think that saving Beirut from the mud of wars and the race of armed men to occupy its houses, shops and markets, was a mistake! The war destroyed Beirut’s heritage and Rafic Hariri’s project saved the heritage from total destruction and launched the biggest reconstruction process in Lebanon’s history to discover the ancient remains of Beirut,” he said.

“We will continue this project because we want to protect the historic and civilized face of Beirut from any attack or violation of laws regardless of the outbidding that we hear,” he pledged.

“And since the fashion today is to create a lie and believe it, let me reply to some lies that are being spread today.

Beirut Municipality is responsible for my words today because as I promised you I will follow up its work and will not tolerate any negligence: Beirut Horsh  (forest) will remain for the people of Beirut and the municipality tasked a consultant to develop it. The tender to rehabilitate, maintain and manage it will take place next month. During the war Horsh Beirut was a demarcation line for militias, a refuge for outlaws, and the Israeli invasion burned it. Rafic Hariri rehabilitated it and planted thousands of pine trees to make it as it is today, a green oasis for the people and a natural reserve,” he said.

“Ramlet Baida beach will always remain a free beach for the people of Beirut and the municipality will enlarge and develop it and asked a consultant to start working on it.

Green spaces in Beirut will increase. Beirut Municipality prepared the master plan for the green areas with “Ile de France” and all the cement blocks in Beirut will be removed and replaced by 6 thousand trees. Existing parks will be rehabilitated and new ones will be established as well as spaces for pedestrians and bicycles.

Beirut’s sea is polluted and all of us have the right to a clean sea. The problem is that the polluted water is being gathered in the right way, but most of it is going to the sea because the work in Burj Hammoud processing plant started just few weeks ago and Al-Ghadir plant needs rehabilitation so that these two plants can absorb all wastewater and rain water in Beirut. The work on these refineries is underway but needs time, so in the meantime, a 550 meter pipe that takes water into the deep see has been completed, and will reduce 70% of the pollution on Beirut coast. As for solid waste, we always hear that the problem is still there and Beirut will drown once again in waste. This is not accurate. The sweeping and gathering tender according to international standards will take place in eight days. The comprehensive plan to sort from the source and turn waste into energy is complete. Garbage will not return to the streets of Beirut! And as you all have noticed the streets are being asphalted and sidewalks are being rehabilitated. Tunnels will also be rehabilitated, particularly Salim Salam Bridge and tunnel and Cola bridge and the work will start this summer,” he explained.

“As for electricity, I know that the municipality prepared a plan to provide it 24 hours per day in Beirut and is discussing this with the Ministry of Energy. Meanwhile, street lights will use ‘Led’ lights that save 50% energy consumption and protect the environment. Next year there will be eco-friendly buses for public transportation. Sports stadiums in Achrafieh and Kaskas will also be rehabilitated and the project of the new municipal stadium will be launched. Also next year 8 health clinics will be rehabilitated and health cards will be issued for the people of Beirut in addition to emergency services,” he added.

“The municipality  is working in full coordination  with the Beirut Mohafez. They launched 12 tenders until now and they are working on a study about all the needs of Beirut for the next 25 years. The Mount Lebanon mohafez will also be from Beirut and all Beirut posts in the state, municipality and firefighting will remain for Beirut and its share will always be preserved,” he indicated.

“We will always work together to keep Beirut the jewel of the Arabs, the center of creativity, investment, tourism, medication and education, and the engine of economy and job opportunities for the youth of Beirut and all the Lebanese,” he concluded.