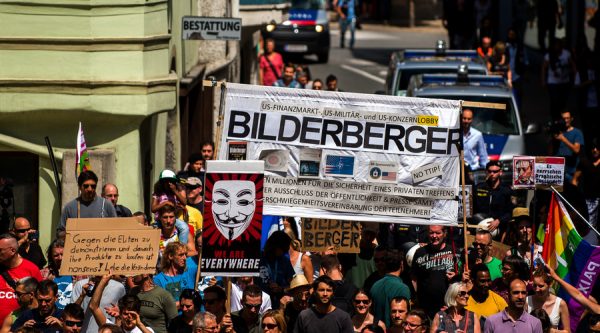 The storm around Donald Trump is about to shift a few miles west of the White House, to a conference centre in Chantilly, Virginia, where the embattled president will be getting his end-of-term grades from the people whose opinion really matters: Bilderberg.

The secretive three-day summit of the political and economic elite kicks off on Thursday in heavily guarded seclusion at the Westfields Marriot, a luxury hotel a short distance from the Oval Office. The hotel was already on lockdown on Wednesday, and an army of landscapers have been busy planting fir trees around the perimeter, to protect coy billionaires and bashful bank bosses from any prying lenses.

Perched ominously at the top of the conference agenda this year are these words: “The Trump Administration: A progress report”. Is the president going to be put in detention for tweeting in class? Held back a year? Or told to empty his locker and leave? If ever there’s a place where a president could hear the words “you’re fired!”, it’s Bilderberg.

The White House is taking no chances, sending along some big hitters from Team Trump to defend their boss: the national security adviser, HR McMaster; the commerce secretary, Wilbur Ross; and Trump’s new strategist, Chris Liddell. Could the president himself show up to receive his report card in person?

Henry Kissinger, the gravel-throated kingpin of Bilderberg, visited Trump at the White House a few weeks ago to discuss “Russia and other things”, and certainly, the Bilderberg conference would be the perfect opportunity for the most powerful man in the world to discuss important global issues with Trump.

The US president’s extraordinary chiding of Nato leaders in Brussels is sure to be chewed over at Bilderberg, which takes its name from the hotel in the Netherlands where its conference first met in 1954. The Bilderbergers have summoned the head of Nato, Jens Stoltenberg, to give feedback. Stoltenberg will leading the snappily titled session on “The Trans-Atlantic defence alliance: bullets, bytes and bucks”. He’ll be joined by the Dutch minister of defence and a clutch of senior European politicians and party leaders, all hoping to reset the traumatised transatlantic relationship after Trump’s galumphing visit.

The invitation list for this year’s conference is a veritable covfefe of big-hitters from geopolitics, from the head of the IMF, Christine Lagarde, to the king of Holland, but perhaps the most significant name on the list is Cui Tiankai, China’s ambassador to the US.

, “China” will be discussed at a summit attended by the Chinese ambassador, the US commerce secretary, the US national security adviser, two US senators, the governor of Virginia, two former CIA chiefs – and any number of giant US investors in the country, including the heads of the financial services firms the Carlyle Group and KKR. Oh, and the boss of Google.

Eric Schmidt, the executive chairman of Alphabet, Google’s holding company, has just come back from a trip to Beijing, where he was overseeing Google AI’s latest game of Go against puny humans. He declared it “a pleasure to be back in China, a country that I admire a great deal”. Three days spent chatting to the Chinese ambassador certainly won’t harm his ambitions there.

All this is the kind of thing that should be headline news, but with the president of Turner International attending, we can be fairly sure Bilderberg won’t make many ripples at CNN. And British readers should not expect much coverage at the London Evening Standard either: their new editor and longtime Bilderberg attendee George Osborne is on the list, despite a general election looming in a week’s time.

You could of course complain about a lack of press coverage of Bilderberg in the UK, but with the head of the media watchdog Ofcom at the conference, you may not get an immediate reply.

So will Trump be given his marching orders at Bilderberg, or will he be kept on as a useful doofus? There’s a small but worrying clue for what Bilderberg might have in mind for Trump tucked away on the invitation list: one of the guests this year is the UK’s former chief of the defence staff, Sir Nicholas Houghton. His new role? Constable of the Tower of London.