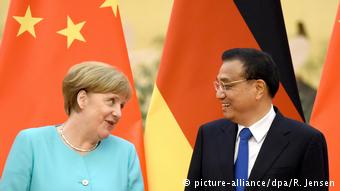 Chinese Prime Minister Li Keqiang German Chancellor Angela Merkel
Share:
China and the European Union will seek on Friday to save a global pact against climate change from which U.S. President Donald Trump appears to be set to withdraw.

As China emerges as Europe’s unlikely global partner on areas from free trade to security, Premier Li Keqiang will meet top EU officials at a summit in Brussels that will also address North Korea’s missile tests and global steel overcapacity.

Speaking on Tuesday in Berlin, Li underlined strong support for the 2015 Paris climate change accord from China, which overtook the United States as the world’s biggest emitter of greenhouse gases in 2007.

“China will stand by its responsibilities on climate change,” he told reporters after meeting German Chancellor Angela Merkel and before flying on to Brussels.

In a statement backed by all 28 EU states, the European Union and China will commit to full implementation of the Paris Climate Agreement, EU and Chinese officials said.

The joint statement, the first between the China and the EU, commits to cutting back on fossil fuels, developing more green technology and helping raise $100 billion a year by 2020 to help poorer countries cut their emissions.

Chinese PM Li Keqiang meets Merkel in Berlin for talks on trade and climate issues ahead of #EUChinaSummithttps://t.co/O5QmezRt1Q pic.twitter.com/2twROawbBi


“The EU and China consider climate action and the clean energy transition an imperative more important than ever,” the statement, by European Council President Donald Tusk, European Commission President Jean-Claude Juncker and Li, will say.

“The increasing impacts of climate change require a decisive response,” they will say.

China asked that the annual summit, normally held in mid-July, be brought forward to press home President Xi Jinping’s defense of open trade at the World Economic Forum in Davos in January in response to Trump’s protectionist stance.

Miguel Arias Canete, the EU’s energy commissioner, told Reuters the bloc could depend on China despite concerns among environmental groups that monitoring and verification measures in the Paris accord would be weaker without the United States.
“I have lots of trust in the Chinese. They are very tough negotiators but they are very consistent with what they negotiate,” Canete said.

Trump’s presumed plan to follow through on an election campaign pledge to bolt from the Paris deal, agreed on by nearly 200 countries, made China more important, he added.

“At a moment in which the United States have doubts about the benefits of remaining in the Paris agreement … two major players in the climate arena declare that they are committed to the Paris agreement,” he said of the EU and China.

“If you don’t have a country that emits 28 percent of worldwide emissions (in the accord), you cannot be efficient.”

While China needs EU technical know-how to fight the pollution blighting its cities, the European Union is looking to Beijing to take action against emissions blamed for increased droughts, rising seas and other affects of climate change.

In a broader final communique focusing on a range of other issues, Li, Juncker and Tusk are expected to commit to free trade and reduce a global steel glut that Europe and the United States say is an attempt by China to corner local markets.

The EU and China will seek to “refrain from all forms of protectionism and uphold free and rules-based trade”, the leaders will say in a 60-point statement, according to a draft. They promise to “address steel overcapacity at its roots”.

The warmer EU-China relationship, partly spurred by Trump, has transpired despite a long-running EU spat with Beijing on what Europe sees as China’s dumping of low-cost goods on European markets.

Still, the EU remains cautious about the direction of its second-largest trading partner, concerned by its militarization of islands in the South China Sea and it sees as increased authoritarianism under Xi.

EU officials say they will bring up the South China Sea in the talks on Friday, but they will be wary to avoid a repeat of last year’s tense EU-China summit in Beijing, which failed to agree a joint statement because of the maritime issue.

China’s claims in the South China Sea, through which about $5 trillion in ship-borne trade passes each year, are contested by Brunei, Malaysia, the Philippines, Taiwan and Vietnam.

The EU also wants an investment treaty with China to open the huge Chinese market to European companies and remove onerous rules forcing them to share know-how.

A senior Chinese official said China is determined to open up and reach a deal, which is seen as a forerunner to a possible future free-trade accord.