Trump, Kushner and Bannon prepare for ‘war’ over Russia investigations 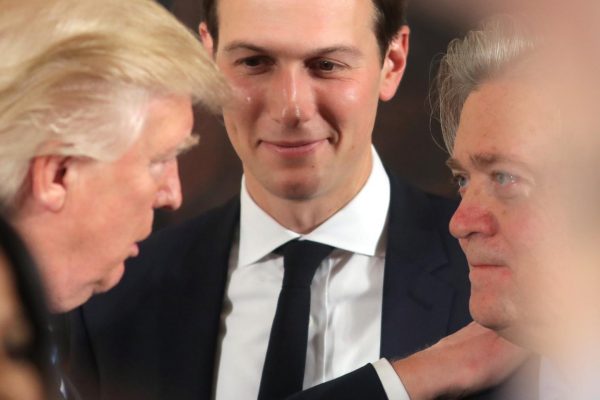 Once U.S. President Donald Trump returns from his overseas trip, the White House plans to launch its most aggressive effort yet to push back against allegations involving Russia and his presidential campaign, tackling head-on a scandal that has threatened to consume his young presidency.

Trump’s aides are preparing to establish a “war room” to combat mounting questions about communication between Russia and his presidential campaign before and after November’s presidential election, administration officials and persons close to Trump told Reuters.

The strategic shake-up at the White House comes as Republicans in Washington increasingly have fretted that the probe, continued chaos in the West Wing and Trump’s steady slide in opinion polls will derail the president’s drive to reform healthcare, cut taxes and rebuild the nation’s infrastructure.

Upon Trump’s return, the administration will add experienced political professionals and possibly more lawyers to handle the Russia probe, which has gained new urgency since the Justice Department appointed a special counsel to head the investigation, the sources said.

Beyond pushing back at suggestions that Moscow is unduly influencing Trump’s administration, the messaging effort will also focus on advancing Trump’s stalled policy agenda and likely involve more trips out of Washington that will feature the kind of raucous rallies that were the hallmark of Trump’s campaign.

A person in regular touch with the White House said it needed a different structure to focus on the “new reality” that there would be continued leaks to the media from the law enforcement and intelligence communities, leaks that have increased in frequency since Trump fired former Federal Bureau of Investigation Director James Comey on May 9.

“Since the firing of Comey, that really exposed the fact that the White House in its current structure … is not prepared for really a one-front war, let alone a two-front war,” the person said. “They need to have a structure in place that allows them to stay focused” while “also truly fighting back on these attacks and these leaks.”

The White House declined to comment on plans for a “war room” but said Trump will be looking to expand on momentum it believes it has built up during the president’s trip to Saudi Arabia, Israel, and Europe. A White House official confirmed plans to hold more rallies.

Trump returns to Washington on Saturday from his first trip abroad as president.

“The president has had an incredibly successful trip overseas and the White House looks forward to continuing an aggressive messaging strategy to highlight his agenda when we return to D.C.,” said White House spokeswoman Sarah Sanders.

Jared Kushner, a senior adviser to Trump, will be involved in the new strategic messaging operation, as will Steve Bannon, another top adviser who specializes in managing Trump’s populist appeal and shaping his political image, the sources said. Bannon and Trump’s chief of staff, Reince Priebus, have been laying the groundwork for the plan this week, they added.

On Thursday, NBC News and the Washington Post reported that Kushner, who held several meetings with Russian officials following the election, is a focus of the probe, making him the first current White House official to be caught up in it, although Kushner, who is Trump’s son-in-law, has not been accused of any wrongdoing.

Corey Lewandowski, Trump’s former campaign manager, is also expected to be part of the effort. Lewandowski, who has been seen in the White House recently, could join the administration as early as next week, a source close to him said.

This month, the Justice Department named Robert Mueller, a former FBI director, as an independent special counsel in the probe.

Trump has been frustrated of late that his communications team hasn’t done a more effective job at making the case that he isn’t implicated in the Russia probe and highlighting his administration’s successes, sources close to the president said.

The White House declined to comment on the president’s frustrations.

Another Republican close to the White House said the new team is taking a page out of former President Bill Clinton’s playbook. When Clinton faced impeachment in the late 1990s, he assembled a crisis-management operation that dealt with fallout from his affair with Monica Lewinsky while allowing the rest of the White House to deal with day-to-day policy matters.

“The goal of the White House is to try and contain the crisis and media coverage of the special counsel,” the Republican said.

Christopher Ruddy, chief executive of Newsmax Media and a Trump friend, said he expects the president will travel more when he returns from overseas and encouraged the White House to focus on issues that pump up his base voters.

“From my perspective, I think the president should be doing the stuff that he does best, which is talking about his agenda: jobs, trade and security,” Ruddy said.

Trump has scheduled a political rally for next week in Cedar Rapids, Iowa. The White House said other similar events are in the planning stages.

Republicans in Congress are aching for Trump to leave the distraction of the Russia probe aside and focus on legislation and nominating officials to fill the hundreds of vacant slots across the administration.

“What we really want to be able to do is tend to our business,” Mike Rounds, a Republican Senator from South Dakota, told Reuters. “We’ve got a healthcare bill we’re working on. We’ve got tax reform that we think is important.”

Some of Trump’s donors, too, say they are concerned. Stanley Hubbard, a billionaire radio mogul from Minnesota, said he worries that the White House continues to be distracted by the Russia scandal, but laid some of the blame on Trump himself.

“He talks when he shouldn’t,” he said.

Former U.S. House Speaker John Boehner said this week that Trump’s time in office has been a “complete disaster” aside from foreign affairs. Boehner, a fellow Republican, told an energy conference he supported efforts to “get to the bottom” of any potential interactions between Trump associates and the Russian government but described any calls to impeach Trump as the purview of “the crazy left-wing Democratic colleagues of mine.”