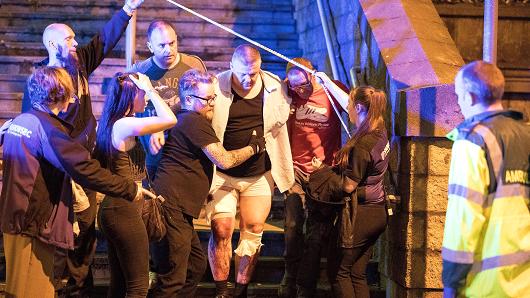 Police and other emergency services are seen near the Manchester Arena after reports of an explosion
Share:

Nineteen people have been killed and about 50 injured in a suspected terror attack at Manchester Arena.

Police were called to reports of an explosion at the venue at about 22:35 BST following a pop concert by the US singer Ariana Grande.

The cause of the blast is unknown but North West Counter Terrorism unit is treating it as a possible terrorist incident, sources have told the BBC.

Greater Manchester Police is working to set up a contact number for relatives.

Officers have told the BBC there is a second suspect device near where the first explosion occurred.

Reporters were moved away from the scene and a controlled explosion has taken place.

British Transport Police say the explosion was in the foyer area of Manchester Arena.

Manchester Victoria station, which is close to the concert venue, has been closed and all trains cancelled.

The BBC’s Tim Ashburner, who is at the scene, spoke to some volunteer paramedics who treated the injured for “shrapnel-like injuries”.

A number of eyewitnesses have described the confusion in the aftermath.

Andy Holey, who had gone to the arena to pick up his wife and daughter who had been at the concert, said: “As I was waiting, an explosion went off and it threw me about 30ft from one set of doors to the other set of doors.

“When I got up I saw bodies lying on the ground. My first thought was to go into the arena to try to find my family.

“When I couldn’t find them, I went outside with the police and fire and looked through some of the bodies to try and find my wife and daughter.

“I managed to find them eventually and they’re OK.

“It was definitely an explosion and it was some force. It happened near the box office at the entrance to the Arena.”

The police activity around the arena has been huge. There are blue flashing lights and cordons seemingly on almost every street corner.

A wide area around the venue itself has been completely taped off, and the crime scene appears to be widening, with police pushing people further and further back.

I’ve spoken to people who are shaken, scared and often tearful. One thing that’s apparent is there are many, many young people, some of them with parents or guardians. One mother told me her priority was simply to get her daughters home.

Other people have been more candid and have described seeing people covered in blood, or being treated by paramedics. There’s still a huge sense of confusion and people are constantly searching for information while letting their families know they’re safe.

Robert Tempkin, 22, from Middlesbrough, said: “Everyone was screaming and running, there were coats and people’s phones on the floor. People just dropped everything.

“Some people were screaming they’d seen blood but other people were saying it was balloons busting or a speaker had been popped.

“There were lots of ambulances. I saw somebody being treated. I couldn’t tell what had happened to him.”

“A bang went off and everyone stopped and screamed… we basically hit the deck,” he said

“It was bedlam… it was horrific.

“We got up when we thought it was safe and got out as quickly as possible.

“People were just crying and in tears… police cars were everywhere.

“We just wanted to get out as quickly as possible because we didn’t know what was going on.”

Manchester Arena, formerly known as the MEN Arena, is the biggest indoor venue in the city with a capacity of around 18,000 for concerts.

The arena foyer connects with Victoria train and tram station, a major hub on the northern edge of the city centre.

She’s a big draw for young fans, with hits including Problem, featuring Iggy Azalea, which hit number one in the UK in 2014; and Side To Side, featuring Nicki Minaj, which reached number four last year.

She’s currently on a European tour – she’s already played Birmingham and Dublin and is due to be at the O2 Arena in London on Wednesday and Thursday.

Michelle Sullivan, from Huddersfield, was attending the concert with her daughters, aged 12 and 15.

“It was really scary,” she said. “Just as the lights have gone down we heard a really loud explosion… Everybody screamed.

Pat Carney, Manchester City Council’s spokesman for the city centre, said the city’s thoughts were with the families of those killed and injured.

“It’s a very easy target – a concert hall where young people are enjoying music,” he said.

“The public are really co-operating by staying away from what is basically now a crime site.

“The world we live in, police and the council have emergency procedures that we practise all the time.

“Obviously everyone in the city is shocked, having seen how young some of these people are

“The police are treating it as a live site, we don’t know if this is the end or there are other incidents in that area… we don’t know at the moment.”

Within an hour of reports of the incident emerging, people began offering spare rooms and beds to people stranded in the city using the hashtag #RoomForManchester.

Hundreds of tweets offering places to stay are being shared and re-tweeted thousands of times.